Noomi Rapace stars in “Angel of Mine” as Lizzie, an ex-wife and distant mother who seems to be fading away. She shares custody of her preteen son Thomas (Finn Little) with Mike (Luke Evans), and in the movie’s opening exchange scene, Mike tells her, “He can feel your darkness.” Her life hasn’t been the same since a loss seven years ago, which has affected every part of her: she can’t move on from her relationship by dating, and she constantly blows off her job at a cosmetics store. Lizzie is speeding through a downward spiral, and this film from director Kim Farrant wants us to sit with this character study, before placing it in a parent's nightmare.

Very slowly, the story reveals details about Lizzie’s sadness, and about the person that she’s mourning, like when she's seen lighting up a birthday cake for nobody in the room. “Angel of Mine” is certainly a moody piece in this first act, and its ominous soundscape and dour color palette initially make the story feel a bit out of reach. As the story creates a base out of showing Lizzie’s darkness, it feels one-note in certain instances—we can only get to know her from a distance, instead of being welcomed into her pain.

But Farrant’s confidence as a storyteller—along with Rapace’s full-bodied performance—enrich the story and guide it toward its delicately bonkers premise, in which Lizzie becomes obsessed with Lola (Annika Whiteley), the young daughter of Claire (Yvonne Strahovski), Lizzie's neighbor. After noticing Lola at a party, she starts to appear at Claire’s house, under the guise of possibly wanting to the buy the house before Claire’s family moves to Perth. When her son befriends Lola’s brother and they have playdates, Lizzie gets even more access to Lola, and tries to talk to have one-on-one time with her.

In a development that Rapace sells with great desperation in her eyes, Lizzie believes that Lola is actually her daughter Rosie, who died in a hospital fire days after being born. It’s an impossible claim that comes from catastrophic grief, and Lizzie's denial of it, but the script from Luke Davies and David Regal plants a seed of plausibility that's hard to resist. As Lizzie starts to exhibit inappropriate behavior toward Lola, the story becomes more magnetic, her suffering all the more tangible. When she’s with Lola, it’s the only time that Lizzie smiles; it’s the only time that Lizzie doesn’t look like she’s made of glass.

Farrant cuts the film so that we are continually surprised by how far Lizzie’s reckless lack of boundaries takes her, like when Lizzie pops up at Lola's ballet recital, and watches from backstage. But Farrant is not interested in the salacious elements of this story. Underneath the plot is a wealth of raw pain, and whenever Farrant digs into that, the saga goes from moody to emotionally visceral. On top of that, she doesn’t pass judgment on her characters. It’s a vital approach, as much as it might alienate viewers looking for an easy thrill, or a monster to be easily disgusted by.

Claire slowly catches wind of Lizzie's fixation, and it leads to a very good performance from Strahovski. She’s at a lower timbre than Rapace but has just as much force, especially in how she depicts someone attempting to balance pity and anger within such a nightmarish predicament. When Lizzie confesses about the tragedy in her life, it vividly disarms Claire, and complicates her decision to not shut this down with a call to the police even more. And yet, when Lizzie goes too far later in the film, Claire goes into mama bear mode, and the movie achieves two visceral images of mothers desperate to protect what (and who) is theirs.

“Angel of Mine” is a great example of how execution determines the potential of a premise: in this case, Farrant veers towards complex morality and tough examples of grief, paranoia, and parenthood. It sounds from the pitch like it could be a TV movie where people shout “That’s my baby!” at each other, but aspires to be a Hirokazu Kore-eda movie with a couple stalker beats. Like Kore-eda’s domestic dramas, “Angel of Mine” is concerned with bloodless yet life-changing stakes about family. It doesn’t always achieve those higher ambitions, but its confidence becomes a factor of intrigue, along with the nagging thought that … maybe Lizzie’s right. 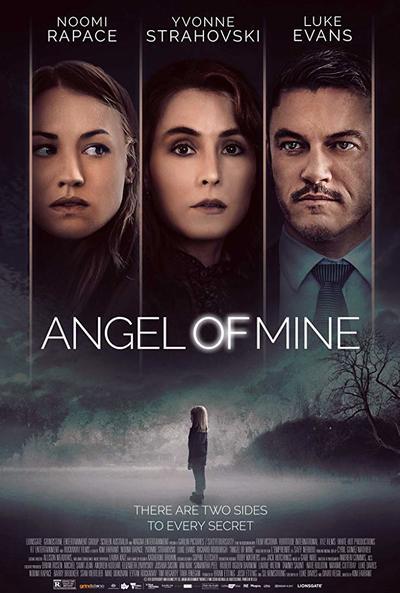