Contrary to rumor, generals get lonely too. At least that’s what “An Ordinary Man” will have you believe. Writer/director Brad Silberling’s latest is about an isolated war criminal and the pretty young maid who enters his orbit through seemingly accidental means. A mutual respect grows between them. That's about it. This two-hander defies further explanation simply because there isn’t really anything else to define. Nothing in “An Ordinary Man” rings true; not the location, nor the performances nor the story. Instead, everything is written in shorthand, with symbols standing in for characterization and plot. Only a film this structurally empty could begin with a spy movie-style escape and end with a road trip that plays like a demented rom-com between a man and a woman who begrudgingly realize that the other person has feelings, too. It’s as if John le Carré had written “When Harry Met Sally.”

The war criminal in question, listed only as The General in the credits, is played by Sir Ben Kingsley. He is the last of the men responsible for genocide in the former Yugoslavia. His atrocities are supposedly legendary, which makes him a target for international forces who wish to capture him and bring him to justice. His life is spent on the run, moved from place to place by an exasperated former agent of the state named Milo (Peter Serafinowicz). “I’m tired of looking at the back of your head!” says the General to Milo as Milo drives him to his newest hideout on the outskirts of Belgrade. They had to ditch the old hideout (and many others before that) because the General has a penchant for appearing in plain sight whenever the mood strikes him. The movie is vague about whether it’s mere arrogance or a desperate need to connect that sends the General into the general public, but you’d think that someone wanted by numerous jurisdictions for crimes against humanity would know how to keep his ass at home.

Into The General’s latest hideaway comes Tanja (Hera Hilmar). She’s the maid for the previous owner, whose whereabouts are alluded to in a throwaway line of dialogue about kidnapping. Tanja has a key, which should have put The General on notice that Milo’s security skills aren’t worth squat. If the former maid has a key, maybe the CIA does too. The General doesn’t have time to ponder any of this. He pulls a gun on Tanja, makes her strip to her skivvies and then demands she take a shower. “Don’t worry, I’m not going with you,” he tells her. No matter. Tanja emerges from the bath in all her glory so that the General and the audience can have a good look.

Oddly enough, this is “An Ordinary Man”’s best moment, if only for the way Hilmar plays the scene. She is completely unreserved about the nudity, and as The General questions her at gunpoint a cool sense of defiance plays across her face, a steely reserve that made Tanja seem more interesting than she’ll turn out to be. When The General tells her that she belongs to him now, and that she can never leave, Hilmar has a “been there, done that” expression on her face. As a citizen, she has seen the worst that men like The General have to offer, and she’s confident she can ride this out. It’s perhaps the only time “An Ordinary Man” chooses to explore the ramifications of being set in its real world location.

Tanja is a terrible maid. A lit raccoon with a Bounty paper towel would do a better job on the windows than she does. She also burns food beyond recognition. Her skill set is wanting because Tanja isn’t really a maid. She’s a secret agent sent by Milo to “distract” The General and keep him out of sight. Lest you think this is a spoiler, I must point out that this revelation is not only in the press release, it’s in the trailer. Come to think of it, Tanja is pretty much garbage as a bodyguard too—she lets The General take her dancing at a fancy club, then loses him. “With a beautiful woman at his side, a man is invisible,” The General tells her. Stick this arrow of advice in your quivers, future criminals.

“An Ordinary Man” does not want to reckon with The General’s crimes. The casualties of war, both psychological and physical, are occasionally brought up in protracted swatches of dialogue that go nowhere. So we never get a bead on either character’s motivations. Why would The General want Tanja to defy her orders to take him back to his hometown, knowing that this place is teeming with agents looking for him? Why does Tanja do it? And why does Silberling film this road trip as if he’s Nancy Meyers dragging an embarrassed Diane Keaton to visit her rich family in the Hamptons? Seriously, how can anyone generate suspense with Kingsley ducking down in the backseat while barking driving directions like a pissed-off GPS?

Sir Ben Kingsley is a wonderful actor whose impressive range has taken him from the epitome of non-violence in “Gandhi” to the beyond malevolent Villain Hall of Fame-worthy monster he played in “Sexy Beast.” The General is closer to that latter character, but “An Ordinary Man” doesn’t give Kingsley anything to play besides bemused annoyance. So, Kingsley does what all great actors do when faced with this dilemma: He starts chewing the scenery, constantly referring to Tanja as “MAAAAAID!!!” long after it’s established that she’s no maid. Granted, I’m all for a bit of the ol’ movie screen mastication, but when the actor is consuming such bland, empty calories, it becomes a little distressing. Can’t the filmmakers at least put some peanut butter on this rice cake of a movie for Sir Ben? The viewer will feel equally dissatisfied and unfulfilled. 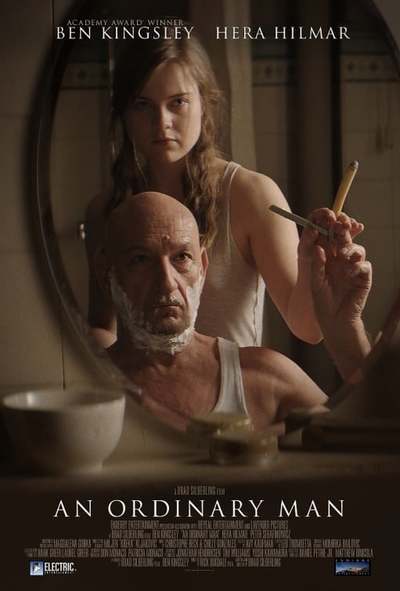 Ben Kingsley as The General