As far-reaching as its generic name inherently suggests, Jake Scott’s sneakily rewarding drama “American Woman” is a time-spanning life story with a slow building script by “Out of the Furnace” writer Brad Ingelsby. And here is its best and biggest feature: Sienna Miller’s expansive performance as the lead stars-and-stripes female teased in the title. It’s a career-best achievement for Miller, grounded on her wide-ranging emotional muscles; sometimes, she is knowingly mundane and uneventful like the life of the ordinary small-town woman she portrays. Other times, she acts so manically scarred that you can feel the traces of pain crawling in her bones in your own body. The package that surrounds her is far from new or pristine, sadly—she plays a grief-stricken single mother going through the motions of mid-life crisis and maturity. But Miller owns the material and single-handedly elevates it to something you can’t look away from, while reminding us the effortless appeal she brought into even her relatively thankless part in “American Sniper.”

She plays Debra, a 30 or 40-something single mother (and amazingly, grandmother) living in a small, chaotic home in a PA town. We meet her as she puts on a body conscious dress and calls out “Bridget” repeatedly. That’s her teenage daughter (Sky Ferreira) she had birthed at 16 years of age, who grew up to do the same thing as her mom did: have a child way too young. Deb calls out Bridget’s name in such desperation that we quickly get a sense of her over-reliance on her offspring. For better or worse though, the duo live in harmony, with Deb helping out with infant Jesse when she isn’t going out to bad dates with an inadequate (and married) prospect.

Her helpful, loving yet immensely disapproving sister Katherine (Christina Hendricks of “Mad Men”) lives just across the street, leading a contrastingly tidy life with two kids and her supportive husband Terry (Will Sasso). This familial bond, shaped both by emotional and physical closeness, is portrayed with a rare sense of realness—sisters both love and assertively confront each other, while the ever reliable Terry truly contends for some kind of a “year’s best brother-in-law in cinema” award. There is also the siblings’ mother in the picture, capably played by Amy Madigan in a relatively inconsequential part.

And that’s just the setting until Bridget disappears one day with no trace. Even the sole suspect in Deb’s eyes (Jesse’s biological father Tyler, played by Alex Neustaedter) ends up being a dead-end target—the poor kid has nothing to do with the vanishing. Meanwhile, Deb’s affair comes to a decisive end, after a frenzied (and nearly tragic) night when she shows up at her married boyfriend’s doorstep like a desperate bunny boiler. Then before we know it, we cut to six years ahead. Bridget is still missing; Deb is taking business classes and raising young Jesse (Aidan McGraw) through a hectic schedule. Bossing them around is the abusive Ray (Pay Healy), who pays for all the expenses, but not without some shouting and physical violence on the side. (You guessed it: Terry and Katherine come to the rescue.) With her nose out of that mess later, Deb continues growing in life, scoring a good job as well as a decent boyfriend named Chris (Aaron Paul of “Breaking Bad”), who later on marries Deb and becomes a father figure for Jesse (played by Aidan Fiske at later ages). But troubles await that relationship, too.

Rest assured, the film won’t leave you in the dark about what happened to Bridget. A random phone call confirms Deb’s worst fears, but since so much time had passed in the story, the audience doesn’t quite meet her at her level of grief. And yet, Miller pulls off a genuinely stunning performance in the film’s final chapter. Throughout, you can trace deposits of other single mothers in her: Patricia Arquette from “Boyhood,” Frances McDormand’s Mildred from “Three Billboards Outside Ebbing, Missouri” and Angelina Jolie’s Christine Collins from “Changeling.” In one moment, she even faintly resembles a Norma Rae-type at her workplace. Miller distills all these hardworking, idiosyncratic and far from perfect mothers into a towering performance that matures alongside Deb. Her make-up becomes subtler, her hairstyle, tamer—one particularly inspired production design decision even gives her small, modest kitchen a believable face-lift. “American Woman” might not serve up a new dish, but the range of the table spread which Miller fluently commands leaves one in awe all the same. 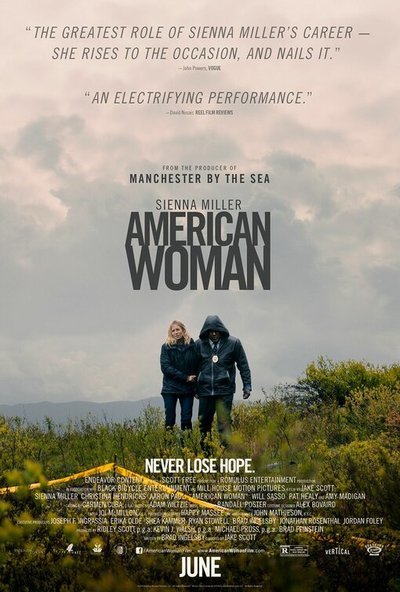 Rated R for language, sexual content and brief drug use.

Will Sasso as Terry