Powered by JustWatch
“American Ultra” tries to combine a sweet, slacker romance with a slick, super-violent action flick. If that sounds jarring to you, that’s probably because it is.

Mixing such disparate genres requires a more deft hand than the one on display from director Nima Nourizadeh, whose previous feature is the found-footage, high-school pukefest “Project X.” “American Ultra” has far more sophisticated production values than that first film—then again, so does your average wedding video—but it’s just as bludgeoning. Yet the script from Max Landis (“Chronicle”) starts out with all the grungy, morose trappings of your typical small-town, indie drama.

Jesse Eisenberg stars as Mike Howell, a long-haired stoner who works at a vividly run-down convenience store in desolate and remote West Virginia. His only goal in life is to propose to his girlfriend, Phoebe (Kristen Stewart), a bail bondsman with whom he shares a bong, a home and, hopefully, a lifetime. Mike knows he doesn’t deserve her (and for a while, it’s a wonder why she stays with him, given that there’s not much to him), and one of the few charming running gags involves his inability to find just the right time to pop the question.

Then one night at work, a strange woman walks up to him at the checkout counter, utters some strange words while buying a cup of soup and walks out. Suddenly, he finds he has the ability to swiftly kill two bad guys who come at him in the parking lot, with the spoon from the aforementioned soup, which the strange woman left behind. As it turns out, Mike is a highly-trained operative from an abandoned government program, and that woman (Connie Britton) was a CIA agent who came to activate him in hopes of keeping him alive.

And now it makes sense that “American Ultra” takes place in a town called Liman, W.V.—perhaps it’s an homage to Doug Liman’s “The Bourne Identity,” with some druggy nuggets of one of the director’s earliest films, “Go.” Like the amnesiac Jason Bourne, Mike is a killing machine and he never knew it, piecing together in his mind the lethal skills and high-tech information he never realized he had.

This might put a damper on his engagement plans. Or will it? “American Ultra” strains to maintain the early, yearning vibe of its young, desperate lovers, even as the threatening scenarios and gory action sequences grow more intense and elaborate. Eisenberg and Stewart, who co-starred in the 2009 dramedy “Adventureland,” have an easy, lived-in chemistry with each other, even as the stakes increase—although Eisenberg is hard to accept as a character who’s lacking in wit and ambition. He’s at his best when he’s playing the smartest person in the room, as he has in films like “The Squid and the Whale” and “The Social Network.”

Also going to waste is a cavalcade of supporting players stuck frustratingly in one-note roles. Britton brings class and smarts to her part as a veteran agent who dares to go rogue for the greater good, but Topher Grace is singularly snarling and sniveling as her much younger superior, who’s only looking out for himself. John Leguizamo grates as a tatted and trash-talking drug dealer. Tony Hale gets little more to do than be meek and subordinate as Britton’s longtime colleague. Walton Goggins, as an arsonist-turned-operative named Laugher, has one genuine moment of connection with Eisenberg but is mostly maniacal. And Bill Pullman shows up for maybe two minutes tops as everyone’s shadowy big boss.

But the thing is, all of their efforts to kill Mike or keep him alive—culminating in a wildly bloody and explosive conclusion in a discount superstore, which features a few clever ideas—seem rather moot. We know from the beginning that Mike will be fine. The whole film is told in flashback as he sits chained to an interrogation table, bruised and sliced but intact nonetheless, which depletes the whole effort of any real tension. Perhaps the hope is that you’ll see the movie in an altered state yourself, and that you’ll have forgotten about all that stuff at the start. 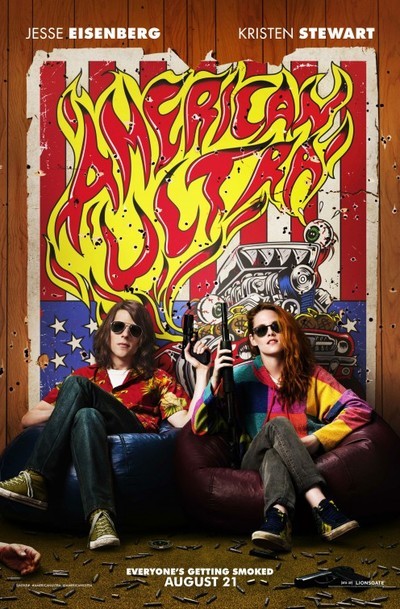 Rated R for strong bloody violence, language throughout, drug use and some sexual content