American Selfie: One Nation Shoots Itself

During a recent visit to Saugatuck, Michigan, I struck up a socially distanced chat with a tourist who vocally refused to wear a mask. When I asked whether she feared contracting COVID-19, she cheerfully declared herself a “non-believer.” Her chilling response runs through my mind every time I hear of the latest death toll due to the coronavirus pandemic, which has claimed over 223,000 lives (as of today) in the United States alone and has shown no signs of ceasing. Every time President Trump boasts about his allegedly superhuman abilities to combat the virus, he insults every person who has been devastated by it, including a beloved relative of mine who passed away only yesterday. The stark contrast between those who treat the virus seriously and those living in willful denial is captured in horrifying detail by the new documentary, “American Selfie: One Nation Shoots Itself.” Though it was directed by House speaker Nancy Pelosi’s daughter Alexandra and was clearly timed to premiere on Showtime in the days leading up to the 2020 US presidential election, the facts that it contains are inarguable and should serve as a visceral wake-up call for anyone still feeling undecided about how to mark their ballots, or whether to vote at all.

Shot over the course of twelve months and concluding with the tone-deaf Trump rally held at Mount Rushmore this past July, “American Selfie” illustrates how the writing was on the wall long before the lockdown in terms of what led us toward our current crises. What’s remarkable is how Alexandra Pelosi, shooting much of the footage herself with a handheld camera, captures images that resonate on multiple provocative levels following the events of recent months. I felt pangs of nostalgia as the film opened at the Cloud Gate sculpture (a.k.a. “the Bean”), a popular tourist attraction located in Chicago’s Millennium Park, which can now only be viewed at a distance, from behind a fence. In the pre-pandemic era, crowds would gather there to take selfies in front of the sculpture’s mirrored surface, which created a dizzying number of reflections when viewed from beneath. There’s no question Pelosi had a different film in mind when she began shooting, just as we all had a different vision of this year’s potential direction. She starts out viewing smartphones—which are cyclically discarded for the latest models—as an environmental threat that consumers have shielded in favor of blissful ignorance. “The Earth is probably going to die soon,” replies an activist participating in a massive climate march, an event pointedly scheduled on the same day that the new iPhone is released in New York City.

A significant portion of “American Selfie” consists of angry protestors on opposing sides of an issue screaming at each other in the streets, through criticizing the film for being repetitive would be missing the point. The past four years have been characterized by an unending onslaught of outrages that threaten to numb us into submission. By simply compiling a fraction of them into a succinct 90-minute running time, Pelosi enables the bracing truth of injustice to break through the noise. To the filmmaker’s credit, she does allow various Trump supporters to argue their points on camera, though the seething hatred reverberating within their words do them no favors (“In America, we speak English!” one woman shouts at the lens). A young MAGA activist yelling “Send Her Back!”, the racist chant targeting Rep. Ilhan Omar, a Somali immigrant, is momentarily rendered speechless when Pelosi asks him if he’s ever considered that he may have been brainwashed. That could certainly be said of the gunman who killed 23 people at a Walmart in El Paso, Texas, after penning a white nationalist manifesto that incorporated the language of Donald Trump in referring to immigration as an “invasion of our country.” This is one of many events in the film not granted quite enough context, such as how the massacre has been deemed the deadliest attack on Latinos in recent American history. The film assumes we’ve already read the headlines and is more concerned with placing a human face on both sides of the gaping ideological divide, where roughly one half of the populace is firmly perched in fantasy.

The viral video 17-year-old Darnella Frazier filmed of George Floyd’s murder at the hands of Minneapolis police is left off-camera here, though we hear the audio and it prompts us to immediately recall the barbaric act, which is permanently ingrained in the minds of everyone who saw it. This is where Pelosi’s view of smartphones shifted dramatically, demonstrating to her how the technology allows us to bear witness to the racism and violence that is often kept in the shadows. Traces of our nation’s systemic inequity that led up to this moment are seen throughout the picture, from predominantly Black towns like Chester, Pennsylvania, poisoned by the consequences of mindless spending, to the house of a disenfranchised family in Lowndes County, Alabama, where sewage routinely floods the lawn, preventing their children from playing outside. The crumbling President Heads tourist attraction in Williamsburg, Virginia, serves as a shrewdly appropriate metaphor for the toppling of oppressive monuments such as the Robert E. Lee statue in Richmond (which is glimpsed at prior to it becoming a prime gathering place for protestors) and Mount Rushmore. Indigenous activists strive to remind Trump that the monument has been placed on stolen land, yet their voices are drowned out by a bombastic fireworks display. In Tulsa, we see a Black man’s sincere attempt at conversing with Trump supporters upended by their laughing dismissal of modern day racism as a “hoax.”

Pelosi and editor Christopher O’Coin do a superb job of juxtaposing the harrowing realities of pandemic-era America with self-righteous hoards whining about their freedom to put others at risk being shut down. One young protestor at a “Reopen Virginia” rally compares her own unwillingness to wear a mask with the bravery of Rosa Parks, while a Trump supporter chants “No More Masks” outside the president’s Tulsa rally—the event attended by a proudly unmasked Herman Cain, who died a month later from COVID-19. Time and again, the film interweaves these enraging sequences with footage of refrigerated trucks in NYC being used as morgues, crematoriums getting overwhelmed with corpses and loved ones forced to die alone. How can the president’s flagrant disregard of a virus that has impacted African-Americans and Hispanics at a massive and disproportionate rate be viewed as anything other than unapologetic racism? Make no mistake, god-fearing voters, this man is as pro-life as bleach injected directly into your veins. Mike Nichols liked when an entire film could be summarized in a single image, and in the case of “American Selfie,” it is that of smiling white Americans posing for pictures while standing mere feet away from Black homeless men lying on the ground. Smartphone cameras can indeed be vital tools for revolutionary change. It all depends on where you aim them. 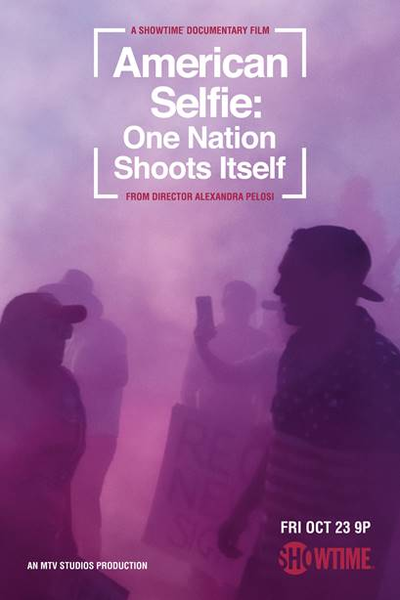 American Selfie: One Nation Shoots Itself (2020)