Let us now speak fondly in praise of the family member we call the auntie. Like the uncle, she’s a specific type of influential character, but unlike uncles, aunties don’t have subcategories of type. There’s only one kind of auntie, and she’s consistent whether you call her “tía” or “anty” or simply by her name. She can be your ally, playing the sibling card while appealing to your parents on your behalf. But she can also wield the hammer of discipline with more force than your folks ever could, knocking an unforgettable amount of sense into you when you go astray. She accomplishes these feats with an indefatigable, take-no-prisoners attitude peppered with a bawdy, impolite sense of humor. Those of us who have aunties know that we are blessed to have them, and are better for it.

David E. Talbert’s “Almost Christmas” has an auntie character in it, and it too is better for having her. She is played by the Oscar-winning actress and comedian, Mo’Nique. In her stand-up comedy days, Mo’Nique was the primary purveyor of the wisdom we associate with our aunties, which makes her Aunt May character perfect casting. Wearing an endless array of costumes and wigs obtained from her career as a backup singer for every imaginable soul superstar, Aunt May is unrepentantly ostentatious. She floats through the often predictable plotlines of “Almost Christmas,” sometimes serving as an instigator and other times serving as a blunt sideline commentator. Every appearance is a comic joy, guaranteeing a laugh or a smile. Aunt May is such a delectable force that the audience waits with bated breath to see if she’ll do what we’d expect from an auntie. And she always does; her consistency is the warmest form of comfort.

Aunt May is the sister-in-law of Walter Meyers (Danny Glover, looking frail enough for Mo’Nique to seemingly break character to comment on it). “Almost Christmas” opens with a hat-tip to Pixar’s “Up”. Scored to The Four Tops’ soul classic “Ain’t No Woman (Like the One I Got)”, we witness the evolution of Walter’s relationship with his wife, Grace, from the earliest days of their marriage, through several kids, including the unexpected final son conceived in their 40’s, and finally to Grace’s death. This mini-movie is a nice bit of directorial foreshadowing; it contains examples of everything director Talbert does throughout the course of the film, right down to the eerily beautiful beams of sunlight that often accompany the Meyers’ youngest son whenever he’s near a window in his parents’ house.

That youngest son (Jesse T. Usher) has the potential for major league sports superstardom, but he’ll always be just the little, pain-in-the-ass youngest brother to his older siblings. Rounding out Walter’s brood is a politician running for office under increasingly shady circumstances (Romany Malco) and the two sisters who can’t stand to be in the same room with each other (Gabrielle Union and Kimberly Elise). They bring various significant others and their children to the first Christmas celebration since their mother’s passing. All Walter asks for is five days where the family can get along without the stabilizing influence of their mother. But, as films like “Soul Food," “Home for the Holidays” and “The Best Man” have proven beforehand, Walter’s wish will not be so easily granted.

There are enough subplots in this thing to populate a couple of Robert Altman movies. This jumble of storylines never once aims outside the familiar, but it’s a well-acted, enjoyable jumble nonetheless. There’s the antagonistic relationship between Union and her high school crush/next door neighbor (Omar Epps), the wandering eye of J.B. Smoove’s goofy subcategory of uncle (he’s married to Elise), Usher’s painkiller addiction, Malco’s potential betrayal of his late mother’s memory and the big secret Walter is hiding from his family.

Every one of these stories climaxes in huge moments of high drama, all of which play out in front of the next generation of Meyers kids. These latest additions to the holiday kids’ table are a tech-savvy array of characters who record everything on their phones. They say the children are our future, and judging by these crumbsnatchers, that future’s going to be instantly available for public consumption by the masses. When one of the kids gives a shout-out to the infamous website Worldstar Hip-Hop after recording a particularly embarrassing bit of family business, I willfully surrendered to this movie.

The committed performances by the cast of talented actors are what elevates “Almost Christmas” above complaints about its familiarity and melodrama. Kimberly Elise is extraordinarily adept at handling heavy drama and broad comedy in the same moment. After all, she’s a veteran of Tyler Perry’s Madea movies which, by the way, feature an auntie character that might be a tad too auntie for her own good. Gabrielle Union and Omar Epps bring sweetness to their story. And as the only two “grown-ups” in the movie, Glover and Mo’Nique bring a welcome maturity even while acting like damn fools. Their final scene together is a beautifully rendered moment of quiet, mature introspection that the two of them play with incontrovertible grace.

Sometimes I question the financial viability of films like "Almost Christmas," simply because I think “why would I go to a movie about a dysfunctional family holiday when I can see my own version for free?” Perhaps what drives audiences to films like this is that sense of empathy Roger always talked about when he described what movies are. The people onscreen may or may not look like us, but we can find some relatability and understanding in their comic foibles and tragic events. Or maybe it’s just a need for a pleasant distraction from all the real-life hell that befalls us. Whatever the reason, we need to understand and relate to one another more than ever nowadays, and if a pleasant diversion like “Almost Christmas” can bring this to an audience, its minor flaws are easily forgivable. 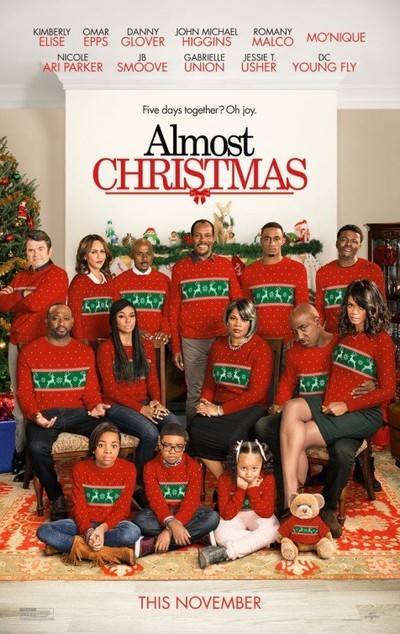 Mo'Nique as Aunt May