All Things Must Pass: The Rise and Fall of Tower Records

I remember the first record I ever owned. It was probably around 1975, and I’d just come out of a showing of “Cooley High” at the Pix Theater in Jersey City’s McGinley Square. Enamored by the Motown score on Michael Schultz’s movie, I convinced my aunt to buy me a copy of The Four Tops’ “Reach Out (I’ll Be There)” at a nearby record store. We went in, and as my aunt thumbed through the soul singles rack, I had a sudden change of heart. That change was brought on by the record that was playing in the store. I just had to have that song as well, but the agreement was one 45, not two. I can still see the guy taking the record off the record player, slipping it into a static-filled paper sleeve before selling it to me. I can also still see my aunt’s facepalm as she realized I’d given up a Holland-Dozier-Holland classic for Chuck Berry’s “My Ding-a-Ling.”

Anybody who has ever spent time in a record store has memories like this. I can close my eyes and walk through that store as if I’d been there yesterday, and after I’m done, I can mentally stroll through the layout of Tower Records on West 4th Street in New York City. It was a place where I’d spent far too much money and time, neither of which I regret. It was a heaven filled with vinyl, easily popped cassette tapes and, eventually, the CD’s that unwittingly signaled the downfall of the neighborhood record store.

The rise and fall of Tower Records is the subject of Colin Hanks’ “All Things Must Pass”, a documentary that inspires long, gauzy gazes back to the carefree, youthful past of viewers of a certain age. In fact, Tower’s story has an arc much like human life. Started in 1960 in Sacramento, Russ Solomon’s business venture began small, then enjoys a period of success buffered by unbelievable decadence and an adolescent brand of fearlessness and perceived invincibility. And just like in life, the piper of harsh adulthood materialized to collect payment on the tune that was never supposed to stop playing.

An onscreen title at the beginning of “All Things Must Pass” informs us that, in 1999, Tower Records was a billion dollar company. “Five years later, it was bankrupt,” the next title tells us, preparing us for the bitter end of the party to which Hanks invites us. We then meet Solomon, whose dad owned Tower Drugs, a store inside Sacramento’s Tower movie theater. To make money, Solomon decided to sell used records from the jukebox, and when that proved successful, he started selling new records. Solomon’s dad, Clayton, wanted no part of this, so he sold the business and the extra space to his son. Tower Records was born, and since there was nothing else to do in the neighborhood, teenagers flocked to it.

Solomon considered his Tower Records employees to be family, and that feeling plays out with the numerous talking heads who populate “All Things Must Pass." People like Steve Gorman, Mark Viducich and the delightfully salty Heidi Cotler discuss their decades long affiliation with the store, starting from their early days as a store clerk to their last days as upper management. Solomon explains that every higher-up started out working in the store. He called his managerial style “the Tom Sawyer method of management.” “I always got someone else to paint the fence,” he says. “Everything we ever did was based on ideas from people in the stores.” Almost every decision has a “seat-of-one’s-pants” feeling, fueled by a massive streak of good luck.

The film gives the impression that working at Tower was a non-stop party “so long as you did the work.” There was no dress code, which appealed to people like former employee and current superstar Dave Grohl, who mentions how he was allowed to keep his long hair. This freedom inspired ideas and rapid growth, and by 1968, Tower Records was ready to take on San Francisco. Once installed there, and in Los Angeles, the celebrities started to come out to visit the store, looking for other artists’ records while gauging how their own work was doing. Elton John appears to talk about his weekly ritual of pawing through albums at the Los Angeles Tower. “I spent more money in Tower Records than any human being,” he says. Later, he expresses genuine heartbreak over the store’s demise.

Tower Records expands to Japan and, much later, into the famous NYC Village location. The old New York I knew and loved gets a visual shout-out when we see just how decrepit the area of West 4th and Broadway was when Solomon bought property there. The store, which was a major hit, revitalized the area and brought its own share of local celebrities, college students and music lovers into its multi-storied interior. While “All Things Must Pass” unflinchingly details the company’s downfall, due in part to record company greed, bad financial decisions and the rise of Napster, there’s a world-weary, lessons-learned stoicism that feels so intimately personal. It makes the happiest scenes in the stores stick with us most memorably.

“Everybody in a record store is your friend for 20 minutes,” says Bruce Springsteen, whose early days were spent at the California-based Tower Records locations. “It’s a place where your dreams [as an artist] meet the listeners.” This is the feeling “All Things Must Pass” instilled in me as I watched it. I imagine millennials will hold up digital music players and roll their eyes at us old people weeping in the audience. “All Things Must Pass” will play as an entertaining history lesson for the current generation. But any movie that begins and ends with the sound of a phonograph needle hitting vinyl knows the audience sweet spot it’s aiming for, and for those folks, “All Things Must Pass” is a rousing success. 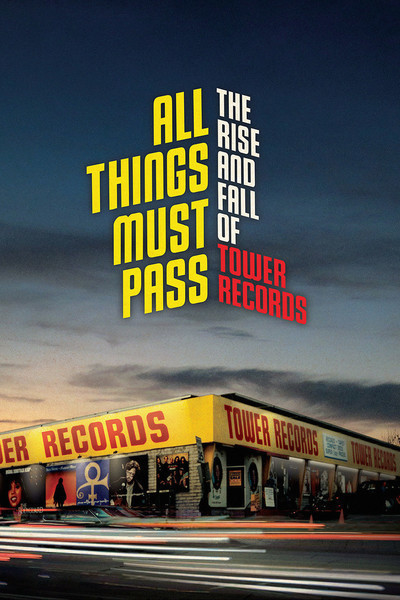 All Things Must Pass: The Rise and Fall of Tower Records (2015)

Dave Grohl as Himself

Elton John as Himself

Chris Cornell as Himself

Heidi Cotler as Herself

Chuck D as Himself

Rudy Danzinger as Himself

David Geffen as Himself