Some movies seem to bring their own moods with them, and the mood of “All Night Long” is dispirited mopery. Here's a movie with a high-energy cast and a promising comic plot, and the director seems to be aiming for the bittersweet. How can you possibly start out with Gene Hackman as the manager of an all-night drugstore, and Barbra Streisand as a fireman's wife who likes to swing, and wind up with a movie where everybody's sighing all the time?

Jean-Claude Tramont finds a way. He's the director of “All Night Long,” and maybe he should bear the responsibility. I've been arguing for years that Barbra Streisand would be one of the greatest comedians of all time if she'd just accept strong direction and not play it safe by controlling every detail of her films. Maybe I was wrong. Surely it wasn't Streisand's idea to play her character as a quiet, vacant-minded nonentity. Here's one of the most powerful personalities in movie history, and she doesn't have a single scene where she lets loose. She's almost intimidated by the clothes she wears.

Gene Hackman's character is also a disappointment. He plays an executive of the drug chain, and he's demoted to the all-night managerial position because he threw a chair through the boss's window. It's at this point (very early on) that the movie gets lost. It could have developed into a fascinating portrait of all-night society, but it doesn't. It assigns a few weirdos to march through the store and do their thing, but they don't feel real, they feel like actors. The story never approaches the rhythms of life. You know a movie's in trouble when it makes a running gag out of how to pronounce the hero's name.

Meanwhile, there's this would-be sex comedy trying to get started. Hackman discovers that his son is having an affair with a married cousin (Streisand). Hackman tries to break it up, but gets involved with Streisand himself. Hackman's wife (Diane Ladd) calls her lawyer. Streisand's husband (Kevin Dobson) tries to intimidate Hackman. This might have somehow been made into a farce, but the director keeps losing the pace. Scenes begin with the promise of fireworks and end with the characters at a loss for words. You also know a movie's in trouble when it has the heroine ride a motor scooter just to make her seem like more of a character.

Here and there, in the midst of this mess, there are some funny lines. Streisand: "So you only planned one child?" Hackman: "Nobody plans a kid like mine." But the movie never really gets going. It's got all the ingredients, but it feels a million miles from life. Was it all shot on a sound stage? In some of the shots in his office at the drugstore, Hackman stands in front of a one-way mirror looking into the store, and the store looks like a painted backdrop. Even when he's in the store, it's all wrong. There aren't any people there, except for the character actors who walk in and act crazy. One low point: An athletic woman tries to stick up the store, throws Hackman and the security guard around, and is dumped into the frozen pizzas. This should generate some electricity, you'd think, but no: The direction turns it into a scene that's first ugly, then pointless.

Maybe I wasn't completely wrong when I suggested that Streisand would benefit from strong direction. She didn't get any here, and the result is a complete waste of time; Hackman's time, as well. These are two of the most talented movie actors we have. They don't make that many films. Neither one really works in “All Night Long.” Life is short. They should get moving. 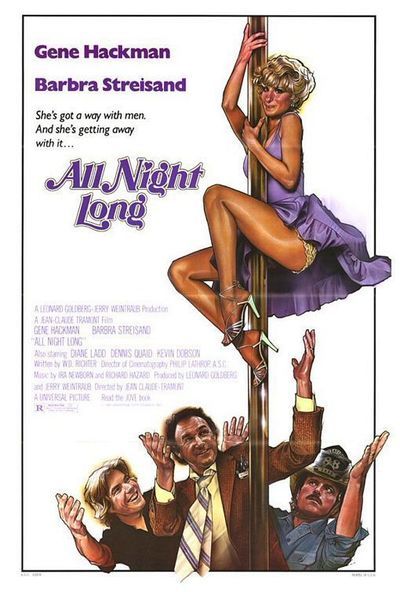