With his 1992 debut of “El Mariachi,” Robert Rodriguez announced himself a director with an eye for action. He prefers to keep his camera movement light and energetic, his edits quick and focused. His movies tend to carry an unmistakable playfulness, like in the all-out barroom brawl between humans and vampires in “From Dusk till Dawn” and the bizarre yet stylish “Spy Kids” franchise in which two siblings face off against some truly surreal-looking enemies.

Rodriguez brings this fun-loving, action-fueled touch to the big-screen adaptation of Yukito Kishiro’s popular manga, Battle Angel Alita, salvaging a project that had languished in development hell since the early aughts. James Cameron, who co-produced the refashioned “Alita: Battle Angel” and co-wrote the screenplay with Rodriguez and Laeta Kalogridis, originally picked up the project around 15 years ago before eventually handing the reins over to Rodriguez. The script is still somewhat unwieldy, chock full of explanations about how robotic bodies work and the history of the decaying setting known as Iron City. Yet, underneath multiple levels of plot and world-building, there’s a weirdo heart keeping the action moving along.

As far as movies about girl robots go, “Alita” isn’t so bad. The movie’s star is a promising Rosa Salazar as the namesake hero, a mysterious yet powerful teen girl bot with oversized anime-style eyes and a good and very powerful heart that could power a city. Alita is the last of her kind, a superior enemy who was somehow were defeated by the humans. After she was found in a scrap heap, Alita is brought back to life with the help of a fatherly doctor, Dr. Ido (Christoph Waltz), a paternal relationship that gives “Alita” some of its more stranger moments. More straightforward is the relationship Alita has with a secret nemesis, Chiren (Jennifer Connelly), Dr. Ido’s former wife, and Vector (Mahershala Ali), a smooth-talking kingpin who promises almost anyone who will listen to him a ticket to Zalem, the city hovering in the sky holding society’s upper class over the heads of the poor below.

Even with so many different creative demands on the story, Rodriguez makes the movie his own. Many of his movies feature Latino actors, like Danny Trejo in the “Machete” movies and Alexa Vega and Daryl Sabara in “Spy Kids,” and the trend continues with “Alita” as the Peruvian American Salazar gets the chance to lead a big-budget movie. He includes Spanish and English signs in Iron City, and some of the extras can be heard speaking Spanish in the background. It’s still rare to hear or see Spanish spoken in sci-fi movies about multilingual futures unless the films are from Latin America.

“Alita” draws inspiration from various sci-fi sources, like the physical divide between the rich and the poor in “Metropolis,” the mysterious femme being with incredible powers of “The Fifth Element," and the multilingual, neon-lit grimy future world of “Blade Runner,” to name a few. Iron City is a place similar to what we’ve seen in other movies, but it’s outfitted with enough differences to tell it apart, like making the society corrupt enough for serial killers and robbing cyborgs of their mechanical parts and giving the place its own gladiatorial-like roller derby that gives Iron City hopefuls their only shot at getting into Zalem. Somehow all of these storylines are interconnected, which adds to the clunkiness of the script but it never allows it to get boring. Some kind of action sequence is always just a few minutes away.

Although Alita is built with some feminist empowerment in mind, some of the messaging malfunctions against old world patriarchy. The odd paternalistic doctor is just the start. Because she looks like a teen girl, of course, she develops a heterosexual crush on a human teen boy, Hugo (Keean Johnson). Never mind that she’s actually 300 some years older and very much a cyborg. The two share some cute moments, but others, like when Hugo introduces her to chocolate or when Alita offers Hugo her one-of-a-kind ancient technology heart so he can go up to Zalem, feel so old school. Was this all because she’s an impulsive teen girl? In another scene, after a devastating battle with a big bad cyborg, Alita must trade out the delicate, girlish body the doctor had built for his daughter (not weird—at all!) for a warrior-grade bod that adheres to her, um, vision of herself. That vision includes a corset-sized tiny waist and an athletic set of breasts that defy gravity. It’s been 300 years after the fall and we’re still holding onto Barbie-size proportions.

Thankfully, Salazar smoothes over many of these cumbersome details with her earnest motion-captured performance. She physically leans into the awkwardness of walking around as a teen girl bot, unsure of her new body and discovering its potential and limits. She explores her new surroundings with literal wide-eyed wonder. When she upgrades her body, she stands tall and confident, having sped through puberty in the span of a surgery. Her character’s chutzpah is the reason why it vaguely makes sense to jump from a “hunter killer,” a bounty hunter in futuristic terms, to a Motorball prospect when she’s working her way to becoming a warrior.

With so much background and story to cover, maybe “Alita” would have benefitted from a “less is more” approach. But considering its estimated budget of $200 million, “Alita: Battle Angel” is an awe-inspiring jump for the man who first burst onto the film scene with a movie that cost around $7,000. The visual bonanza cooked up by Rodriguez, cinematographer Bill Pope and editors Stephen E. Rivkin and Ian Silverstein is enough to power through any narrative bumps with quickly paced action and bleak, yet colorful, imagery. 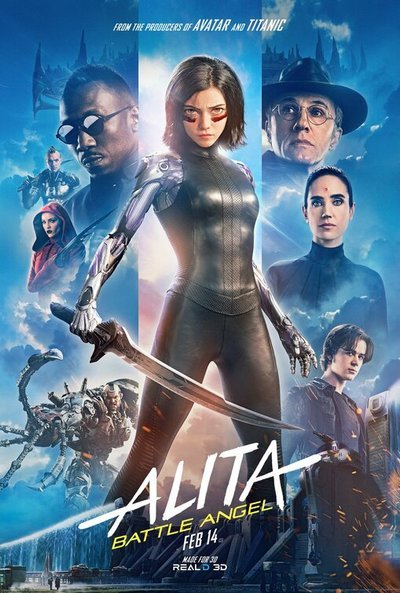