“Akilla’s Escape” opens with a black-and-white historical montage set to Bob Marley’s “Punky Reggae Party.” Interspersed throughout clips describing the rise of gang violence in Jamaica are scenes of an older Jamaican man dancing vibrantly to Marley’s famous reggae banger. This is Akilla Brown (Saul Williams), a well-read, world-weary man who runs a Toronto dispensary for a mysterious figure called “The Greek.” Based on his inclusion in the opening credits, we can assume that Akilla has some tie to the gang life. Williams establishes and internalizes that history well before we’re bombarded with the constant flashbacks that mar this film with their familiar, predictable beats. He is a commanding presence in every scene, revealing so much in his physicality that he renders all backstory moot. This is a man who has seen some things and been some terrible places, yet he feels he must honor his sense of compassion lest he fall into the abyss of those who came before him.

That compassion forms the central conceit of director Charles Officer’s film, but his script with Wendy Motion Brathwaite frustrates by ignoring or downplaying everything that would have given their film something new or intriguing to say. For example, there’s a great scene between Akilla and Benji (Colm Feore), the man who cultivates the strains of weed that has given them success for the past ten years. Now that marijuana is legal in Canada, the government is coming after formerly illegal places like this one. Akilla and one of his musclemen discuss this briefly, describing the new methods to destroy side hustles as more criminal than the side hustles were. This is why Akilla wants to get out of the business, a move that Benji finds rather ironic. This is not only a timely issue, but one I hadn’t seen before. I was intrigued. All this is dropped when a robbery occurs.

It’s a set-up, and the traitor winds up getting hacked to shreds with a machete by one of the criminals. One thief, Sheppard (Thamela Mpumlwana) can’t finish off Akilla, which gets him overpowered and left by his crew. They make off with $150,000 of The Greek’s money and product, leaving Sheppard to take the fall. Security footage of the incident exists, leading Akilla to turn detective to save his own skin. After saving Sheppard from certain death at the hands of Jimmy (Bruce Ramsay), the Greek’s enforcer, Akilla feels a sudden protective kinship with the young, inexperienced gang member. He’s reminded of his younger self, an idea made blatant by Mpumlwana also playing the younger Akilla in flashbacks. This is distracting, a move so blatant that the duck from “You Bet Your Life” should have fallen out of the ceiling with the word “SYMBOLISM” in its beak.

It’s not that Mpumlwana is bad in either part; as Sheppard, he’s a credible deer caught in headlights, and as Akilla, he successfully telegraphs the desire to do the right thing that Williams will quietly manifest in his eyes and his face. The problem is that the flashbacks are presented as a puzzle where we must piece together how Akilla’s kingpin father, Clinton (Ronnie Rowe), wound up as the hideously bloody corpse we see in the opening scene. Rowe is intense, but this storyline does nothing to inform us about the Jamaican gangs Clinton (and by extension, Akilla) were beholden to at the time. There’s a clear parallel between Akilla and Sheppard being unwitting gang members, but we have to wade through story elements that have been beaten into the ground by so many other movies that they’ve lost any power. Several times, I had to ask myself if I hadn’t already reviewed this film. Based on what gets released, if you didn’t know any better, you’d think being Black was nothing but being a slave or having a dangerous side hustle. It’s as disheartening as it is dull and incorrect.

But I digress. The performances in the Akilla-Sheppard plotline render the flashbacks redundant. I don’t think Williams’ memorable work would have been any different had we not known the details of the demons Akilla carries. There’s another very good scene between him and The Greek (Theresa Tova), whom we discover is actually a tough woman who looks like she shares the same amount of mileage in the underworld as Akilla does. Tova does more with an arched eyebrow than pages of dialogue could describe, and the two actors know the kind of crime movie cliché they’re employing and lean into it with an enjoyable gusto. The robbery story is full of watchable two-hander scenes featuring the elder Akilla, including a few with Sheppard’s concerned and fiery aunt, Faye (Donisha Rita Claire Prendergast) and others with fellow enforcers who come out for the climax of the film.

About that climax—it’s exactly what you think it’s going to be, but “Akilla’s Escape” denies you of seeing what transpires, opting instead to only show its aftermath. I was fine with this, though I acknowledge it’s probably a letdown for many viewers. It was the one time we’re left to fend for ourselves. During the film, we’re offered several potential explanations for its title, that is, what constitutes the titular event. I immediately assumed it would be death. I won’t tell you if that’s the case, but Williams’ last scene is far more haunting than the film deserves. “Akilla’s Escape” is undone by its own lack of faith in the viewer, opting to explicitly tell rather than rely on its fine actors to show us who their characters are. 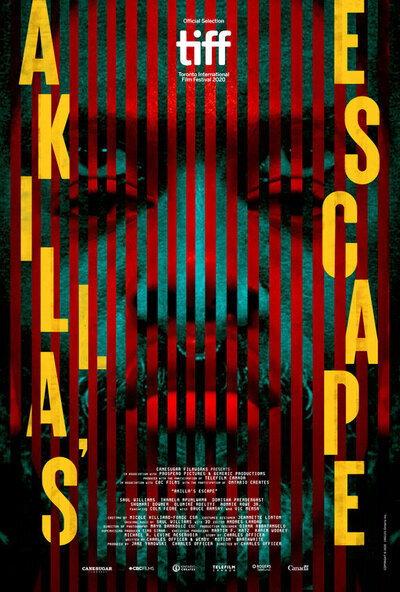