How do you tell the story of a man who, by all accounts, hid so much of himself from the public and even some of his closest friends and colleagues? The answer in Jamila Wignot’s portrait of the dancer and choreographer Alvin Ailey is to let his work speak for him. Through archival interviews, taped performances, and memories from former members of his company and contemporaries, the documentary “Ailey” leads viewers from the dance legend’s childhood in Texas to falling in love with ballet in Los Angeles to his first steps onto a stage and eventually, his final bow. It is an educational journey, an uncompromising look into the challenges of an artistic life, and a tribute to the man whose studio and dance company still bear his name.

Although private by nature and likely shaped by the homophobia of the time, Alvin Ailey found a way to express himself through dance. He was often the only Black man creating in the largely white dance world, but the documentary is not centered on his exclusion. Instead, its lens is focused on his resilience, his sources of inspiration that lead him to create classic and challenging works alike, and his struggles with mental health under the pressures to succeed. The film traces his influences back to the trailblazing Katherine Dunham and training with the technique-driven Louis Horton. After a time, Ailey began to recruit his a company of dancers to create a repertoire of his own and established the Alvin Ailey American Dance Theater. His childhood memories provided the inspiration for works like “Revelations” and “Blues Suite.” Adding to his ballet training, Ailey mixed in movement from jazz clubs and church dances to create a dance vocabulary that felt uniquely his—unlike anything most white audiences had ever seen before. He became an international sensation, traveling the world and working impossible hours, all while facing racism and homophobia at home. In a rare confession, some of the dancers and crew members in his company remember Ailey’s mental health struggles and isolation, pulling the curtain back on the posh façade of a choreographer extraordinaire to show the man behind him.

Although the documentary is fairly straightforward in following the chronological steps of Ailey’s career, its overarching framing device is sometimes at odds with the figure at its center. Interspersed between Ailey’s biographical narrative, is a series of previews from a then-work-in-progress, a tribute from the Ailey dance company to the man and his work. While it is an entryway into Ailey’s life and work, it sometimes feels like it is intruding on the rhythm of his own story. Almost as soon as the narrative hits its groove, it pauses to jump back to the present day to look in on the creative process and challenges of creating a dance rooted in Ailey’s style of movement and storytelling. To Wignot’s credit, this creative choice shakes up the rudimentary paint-by-numbers bio-docs we’ve seen almost our whole lives, and it makes much more narrative sense than some of the tangential asides I’ve seen other less skilled documentarians use. It’s not uninteresting, far from it, but it sometimes feels off, splitting the audience’s attention between the past and the present that sometimes works and sometimes feels off-beat.

It’s difficult to portray a person in all their complexities. Even a figure as public about his past as Anthony Bourdain felt no less mysterious at the end of Morgan Neville’s latest documentary, “Roadrunner: A Film About Anthony Bourdain.” There will always be unanswered questions for those who leave us too early, stories we wish they told or secrets no longer guarded. What we have left is the memories of those who worked with them and knew them. Collected together in “Ailey,” this portrait of the choreographer does much to demystify the legend but only to a point, and thus keeps his mystique while also humanizing the historic figure. "Ailey" is a celebration more than a tell-all, an introduction for a man whose name is now synonymous with American dance and whose steps live on in the bodies of countless teachers, students, and performers. 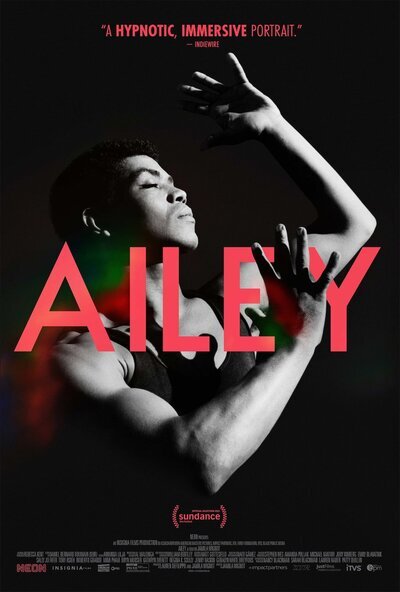 Robert Battle as Himself

Rennie Harris as Himself

Darrin Ross as Himself

Don Martin as Himself

Mary Barnett as Herself

Linda Kent as Herself

George Faison as Himself

Bill T. Jones as Himself