When the newbie nun Agnes (Hayley McFarland) flips out at dinner one night, calling all the other nuns "whores," and seemingly making the crockery move around the table with her mind, the sisterhood is understandably freaked out and confused. They are Carmelite nuns, living in seclusion in a gloomy convent called Santa Theresa, where they have no contact with the outside world. They are completely unprepared to deal with Agnes' psychotic break, so they do what all nuns do in movies like this: they tie Agnes to a bed, where she thrashes around, literally foaming at the mouth. They pray over her. Mother Superior (Mary Buss) is an intense figure, with a pinched face and hysterical eyes, and she calls the Vatican to send help pronto. Mary (Molly C. Quinn), another young nun, looks on with horror at her friend's transformation. These scenes make up the opening sequence of Mickey Reece's effective—and unexpected—exorcism drama, where the exorcism is not the Main Event, but Prologue. It's all well and good to expel the demon from your soul. But where do you go from there? What next?

Seen in intriguing flashback, Agnes and Mary, wimples placed loosely on their heads (Vatican II somehow hasn't reached this particular convent), smoke cigarettes and laugh raucously. Whatever their devotion to the church, the real world is still close to them (although perhaps they became nuns as an escape from harsh realities). Meanwhile, Father Donaghue (Ben Hall) and Father Ben (Jake Horowitz), a young deacon about to graduate from the seminary, are sent to handle the situation. Hall plays Donaghue as a roguish secular rake, who takes the Lord's name in vain and is also in disgrace for, it is rumored, "inappropriate" behavior with altar boys. True to form, the Church has not ousted him, but sent him from parish to parish on fool's errands like this one. Donaghue refers to exorcism as "one of the most elaborate song and dance acts the world has ever seen," a clue to his profane attitude. At first the exorcism seems to have worked, and Agnes emerges from her delirium. The respite doesn't last long, and things go way south. Father Donaghue makes a desperate call to a glamorous famous priest, Father Black (Chris Browning), also in disgrace with Rome, but a favorite on the talk show circuit. Father Black has a gorgeous babe on his arm, and sports a little Errol Flynn mustache, fake tan, and a gleaming eggplant-colored suit. Father Black is totally absurd (Browning's performance is very entertaining.)

Without warning, the film leaps into the future. Mary has left the convent, and works at a grocery store, struggling to stave off her leering boss' advances. Her world is dark, scary, and fraught with threats. Haunted by Agnes, Mary seeks out the man Agnes once loved, a small-time standup comedian named Paul (Sean Gunn). Mary's motives are unclear. She does not reveal to Paul her connection to Agnes. Paul just thinks she's a beautiful blonde who shows an interest in his bad jokes.

"Agnes" is a horror film (kind of), with a couple of gory scenes, and the atmosphere is dark and bleak. Even the diner where Father Donaghue schools Ben on what is to come is lit like a gloomy morgue, all cold greens and black shadows. Cinematographer Samuel Calvin is to be commended for his striking work, and Reece shows an intuitive understanding of when to move the camera, and—more importantly—when not to move the camera. It's all very elegantly put together.

Molly C. Quinn, who also executive produced, is a trembling force of nature as Mary, and her dissociation and trauma is registered in her body's movements, the almost frozen look in her eyes, the emotions always on the verge of spilling out. She looks holy, innocent, but Mary has clearly been through the wringer. Her life has not been easy. She is a practiced survivor. There are times where you have to remind yourself about the Exorcism Prologue. It exists only as a dream-like memory, and Agnes herself haunts the film. The girls bonded in the convent, finding freedom within the cloister, freedom from all the threats, all the nastiness and violence, "out there." It's almost as though when Agnes vanishes from the film, so, too, does hope and/or friendship and intimacy. Reece co-wrote the script with John Selvidge, and it's an interesting piece of work.

The Exorcism was just the beginning. Whatever possessed Agnes (either mental illness, PTSD, or an actual demon), she was ruined by it, and Mary, years later, has yet to recover from the event. It's not the Devil and his minions that are the problem. The problems persist. The problem is the world itself. Nothing can survive there. 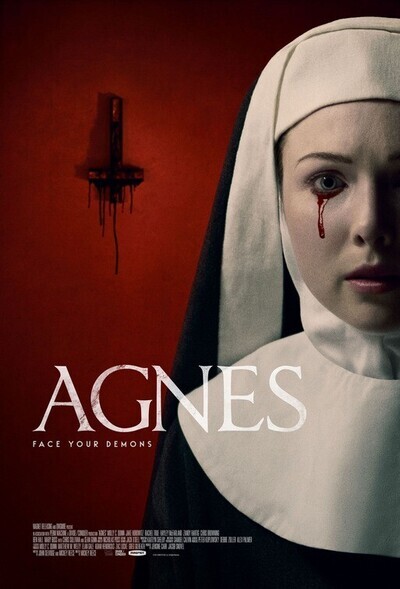