In 2014, teenage Ethan Crouch was given probation and mandatory treatment in a rehab facility for driving drunk and killing four people. He was given no jail time. The case made national news when a psychologist hired by the defense said that Crouch suffered from something called "Affluenza," where poor little rich kids just have to run wild because their parents haven't set any limits. While the judge said that the "Affluenza Defense" carried no weight in her decision, there was a lot of worried commentary about the precedent such a defense might set, similar to the notorious "Twinkie defense." That actually could make a semi-interesting story for a film. Unfortunately, Kevin Asch's second film, "Affluenza," is not that story. A lukewarm attempt to portray the so-called affliction, set against the backdrop of the 2008 economic crash and President Obama's election, "Affluenza" thinks it is deep when it is merely trite. It illuminates nothing.

The situation is made more problematic by the clear nod to "The Great Gatsby" in its story particulars. "Affluenza" suffers constantly in comparison. Fisher Miller (Ben Rosenfield) takes the Nick Carraway role as a teenager from Ithaca, spending the summer with his rich stockbroker uncle Phil (Steve Guttenberg) on Great Neck, Long Island. Fisher, who is a photographer trying to get into art school, enters a world of lackadaisical teenage corruption and boredom, but he finds easy entry into that world by dealing drugs. Phil is married to Bunny (Samantha Mathis), and they have a teenage daughter, Kate (Nicola Peltz). Kate spends most of her days either sunning by the pool or shopping. Women in this world are beautiful useless baubles, supported by the money their men make on Wall Street.

Fisher befriends a rich kid named Dylan (Gregg Sulkin), the Jay Gatsby stand-in, who lolls about like James Spader in "Pretty in Pink," in tennis whites & sunglasses, and is neglected by his rich father. Dylan has fallen madly in love with Kate and begs Fisher's help to "win her heart", and then, in a completely unconvincing scene, he stands underneath Kate's window calling her name in agony, a la Stanley Kowalski. These people don't make any sense. Perhaps that is supposed to be the point, but Antonio Macia's screenplay is unable to get beneath the surface of these people and their circumstances. It's simplistic and condescending. People stand around and state who they are, clearly. The first time we meet Uncle Phil, he says to his nephew: "Art school - la la la, you should go to business school." One hot-shot guy on the golf course happens to be overheard saying, "Let's cruise the town in my new Aston Martin and check out the tail."

Fisher is supposed to be the naive interloper in a sophisticated world about to collapse. Everyone sits around watching Obama's campaign speeches on television with a visible lack of interest. Even the news of the national financial situation doesn't seem to register until it's too late. Only in the performance of Steve Guttenberg do we get a sense of the real stakes for these people. There is a terrific confrontation scene near the end of the film between Guttenberg and Mathis, that is vicious, violent, and undercut by sheer terror that their privileged existence has been destroyed in one fell swoop. That scene is so good, and it's the only one. The young cast seems pretty lost, unaware of the deeper implications of the story, and unable to fulfill the obligations in the script with any sense of coherency. Dylan could be a fascinating character, a broken and shallow kid, who has never had to work on getting a personality, or creating anything for himself. Instead, he remains an insipid caricature.

Some of the scenes are filmed from a slight distance, important scenes, and the distance ends up muting the urgency of whatever might have been happening. The energy that may exist between the actors is lost in that intervening space.

Fisher is, supposedly, from a more modest background, and yet the entitlement around him has affected him so much that at one point he murmurs, "I'm gonna have to get a part-time job at some point," as though that idea is completely revolutionary. Macia also saddles him with terrible lines such as: "What's the point of making all that money if you can't connect to the people that you love?"

One yearns for Gatsby's green light across the bay after listening to dialogue like that. 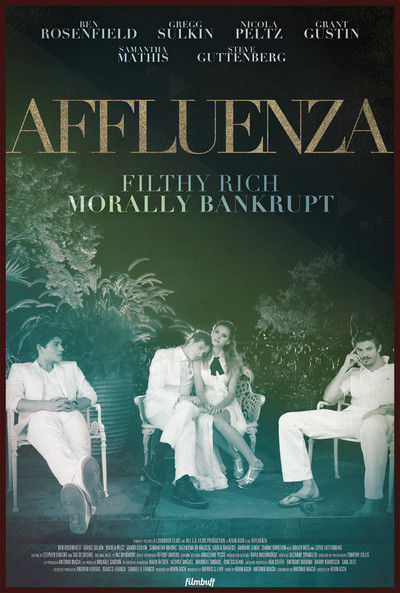