“Asian-American characters have the right to be whoever the hell they want to be. They don’t have to ‘represent their people.’” These are the words famously yelled by Roger Ebert at the 2002 Sundance Film Festival, in response to an audience member’s complaint that Justin’s Lin’s “Better Luck Tomorrow,” chronicling the illegal behavior of teenagers, was “empty and amoral” for Asian-American audiences. Ebert was offended to see a film featuring minorities both in front of and behind the camera being held to a higher moral standard than any picture made by and about straight white men.

I confess to feeling similar outrage when observing the recent attempts made to boycott films for illuminating facets of the transgender experience that fall outside the boundaries of what allegedly progressive commentators deem acceptable. The “cancel culture” currently torpedoing the reputation and IMDb rating of Rhys Ernst’s “Adam” is tantamount to the silencing of trans voices in media. Diversity must be expanded in all forms, not only in regards to who’s telling the stories that end up on screen, but in the stories they are allowed to tackle. As Jeanette, the mother of trans activist Jazz Jennings, once told me, “If my daughter wants to act, I hope she’s considered for all roles, not only those that are trans.”

“Adam” was formed by the collaboration between Ernst, a transgender filmmaker helming his feature directorial debut, and lesbian writer Ariel Schrag, adapting her own graphic novel of the same name for her first movie screenplay. The titular protagonist of their film is a cisgender male played splendidly by owl-eyed Nicholas Alexander, who resembles Will Poulter’s kid brother. Feeling lost at sea amongst the hyper-masculine peers at his high school, he yearns to spend the summer with his older sister, Casey (Margaret Qualley), in New York City. Schrag sets her tale in 2006, a year etched in squirmy hand-drawn animation during the opening shot, reminding us of how little familiarity the majority of Americans had with trans narratives just over a decade ago.

It’s the year that Felicity Huffman received her Oscar nomination for “Transamerica,” a film that—like “Transparent,” the series Ernst produced—cast a cis actor as the trans lead, a move that would be flatly rejected by the LGBTQIA community today. Adam has no qualms with his sister’s queer orientation, which they laughingly conceal from their homophobic mother (Ana Gasteyer), yet he’s baffled upon arriving in Bushwick to see Casey dating a trans man (Maxton Miles Baeza). With her brother suddenly preoccupied with her boyfriend’s nether regions, Casey affirms, “Trans men are real men! Having a penis has nothing to do with it.”

Cinematographer Shawn Peters finds inventive ways of conveying Adam’s mounting unease, and the film cuts between him and Casey’s roommate, June (Chloë Levine), seated on opposite ends of a couch from which they’re eager to escape. We don’t get a full view of Casey making out with her boyfriend until editor Joe Murphy cuts to a wide shot, forcing us—and Adam—to acknowledge what he’s strained to keep out of sight. Everything shifts once Adam attends a party, and finds himself instantly attracted to a youthful redhead, Gillian (non-binary actor Bobbi Salvör Menuez). His shyness and vulnerability are so unmistakably genuine that Gillian takes a liking to him, even as he fibs about “accidentally” spilling a drink on her in a humiliating attempt at a forced meet-cute.

When Adam discovers that she has mistaken him for a trans man, he chooses not to correct her, initially claiming to be a 20-year-old enrolled at Berkeley. The deeper he falls for Gillian, the more committed he becomes to researching what it means to be transgender, watching endless videos online detailing personal experiences with surgeries and hormone therapy. Adam eventually loses his virginity to Gillian in a sequence that carries echoes of Swedish filmmaker Anette Sidor’s extraordinary short film, “Fuck You,” where a girl’s favoring of a strap-on subverts her boyfriend’s understanding of female pleasure. Though he’s wearing a strap-on over his own concealed genitalia, Adam climaxes all the same, and is left exhilarated by the intimacy he’s shared with Gillian, opening himself up to a form of sex that would’ve caused the bros back home to erupt in gay panic.

After their unforgettable portrayal of Morgan Saylor’s hippie-esque roommate in Elizabeth Wood’s galvanizing “White Girl,” Menuez once again commands the screen with their every appearance, resembling a young Julianne Moore not just in appearance, but in the layers of unspoken nuance that register on their face. We sense the weight of expectation that has fallen on Gillian’s shoulders, after she and her girlfriend fought to attend prom as a couple in their small-minded Oklahoma town, resulting in a widely publicized legal battle. When Adam riffs on how M. Night Shyamalan’s name often dwarfs the title of his films, Gillian cleverly likens that to how the term “gay” has superseded all others when defining her identity.

Rather than follow the beats of the Idiot Plot, Schrag knows that Gillian is smart enough to connect the dots well before Adam is ready to confess. This lends an additional layer of fascination to their scenes together, as Gillian comes to terms with how living in the illusion that Adam is trans has enabled her to avoid the budding realization that she may be bisexual. My favorite scene in the film occurs in a space called the Vanishing Room, where Adam and Gillian wander through a cloud of mist illuminated by bursts of color. There are numerous metaphorical levels to this environment, expressing the smokescreen both partners have utilized to deceive themselves, as well as how their mutual infatuation is unbound by labels, fueled only by primal feeling.

The film also wisely avoids falling into the rom-com formula where our hero’s success hinges on whether or not he gets the girl. While adapting her novel, Schrag enriched the subplot involving Adam’s growing friendship with Casey’s neighbor, Ethan (trans actor Leo Sheng), and it is ultimately their scenes that form the heart of the film. For the vast majority of the picture, Adam is unaware that Ethan is transmasculine, viewing them as a role model who can impart helpful, sex-positive advice. Ernst and Schrag have a field day poking fun at Ethan’s workplace, the invaluable NYC art house, Film Forum, where the pre-movie trivia rewards those familiar with obscure legends like Gunnar Björnstrand.

Honesty is the crucial element lacking from Adam’s relationship with Gillian, and when he finally comes clean to Ethan, Sheng plays the moment beautifully. Their initial anger dissipates as Adam begins to articulate the transformative impact of his misguided efforts, allowing Ethan to quell their pal’s nerves with the gift of acceptance. The pair’s final, perfectly pitched exchange accentuates Adam’s confused sense of direction, while portraying the healing power of communication between people willing to provide each other clarity free of judgment or condescension. Equally moving is Casey’s epiphany following an impassioned reading of Julia Serano’s “Cocky,” a rebuke to shame that provides her the courage to no longer remain in the closet. Qualley’s uninhibited exuberance has made her one of the most exciting talents of her generation, yet she is every bit as arresting in the quiet moments when the mask falls, and we see the pain lying beneath.

I didn’t laugh a whole lot while watching “Adam,” but I was never less than wholly engaged, and by the end, I felt grateful for having seen it. In an excellent defense of the film recently published at Indiewire, transmasculine writer Jude Dry explains how revelatory it felt “to be inside the mind of a cis boy who actively desired to be trans.” Having grown up emulating the cisgender identities that have dominated screens both large and small, Ernst has flipped the narrative by having a cis character emulate “trans-ness,” causing him to learn things about himself that would’ve otherwise been left hidden and repressed. Ernst doesn’t feel a moral obligation to only depict behavior onscreen that he endorses, and neither should any filmmaker, for that matter. Such limitations are the antithesis of art. 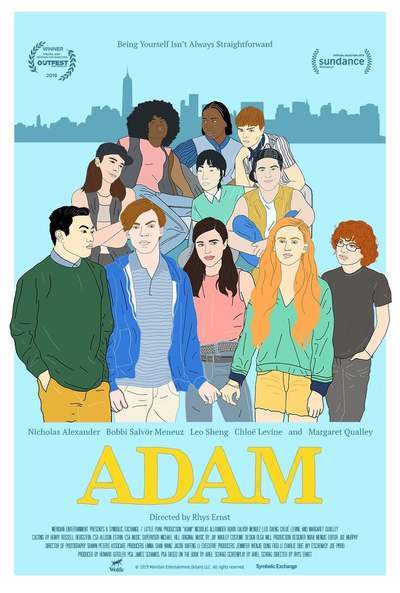