"A.C.O.D.", an acronym that stands for Adult Children of Divorce, could easily be played for heavy drama. Carter (Adam Scott) is in many ways a model A.C.O.D., heroically tolerant of his warring parents Hugh (Richard Jenkins) and Melissa (Catherine O'Hara), wry and distanced but still open enough to try to love other people.

That openness is a hard-won victory. His parents are jerks, and the tricky thing about them is that they're charismatic jerks, selfish and self-indulgent Baby Boomers whose mantra is always "the heart wants what it wants." They are monsters, basically, and they are believable monsters, and first-time director Stu Zicherman never makes them more outlandish than they should be to get broader or bigger laughs. When Melissa tells her younger son Trey (Clark Duke), "Darling, you were a mistake," it takes a second or two to process the fact that she is actually telling him this in an attempt to be reassuring. A moment like this is not either funny or sad: it's shocking, and it gets to the root of the mystery of some human behavior.

The film starts off rather badly with a flashback to Carter's ninth birthday party and some "Arrested Development"-aping narration, but it soon abandons this conceit and finds a specific tone of its own. "A.C.O.D." is a sharp, dark-ish character comedy, settling for a dry tolerance in its point of view that is very appealing and even admirable.

Carter has to deal not only with his family but also with a totally unprofessional counselor named Dr. Judith (Jane Lynch), an oblivious and self-centered quasi-scientist who made big bucks out of telling his childhood story in a book and who now wants to make more money with a sequel. Hugh's new trophy wife Sondra (Amy Poehler) is also in the mix, so we have three major comic actresses working at their best level here, insisting on the truth of the people they are playing and letting any laughs take care of themselves.

At first, I wasn't quite sure what O'Hara was doing with her character, but it turned out that she was already so advanced in her playing of this woman that I just needed to catch up with Melissa's brusque and imperturbable self-absorption. Lynch works in the bossy vein that she has mined on her TV show "Glee" and in other films, but as with O'Hara there is a core of human insight to what she's doing. And Poehler takes a role that might have been merely window dressing and makes a three-dimensional, very troubled person out of her.

It's been said often, but it is worth saying again: comic actors never seem to get awards or even nominations for the work that they do, but it seems clear to me that O'Hara, Lynch and Poehler are all working at as high a level of technique and creativity as, say, Cate Blanchett or Kate Winslet without signaling that they are Acting. They are doing very original work here, and they are matched by Jenkins, who makes his heel of a Dad into a force of nature to match O'Hara's Melissa, and Scott, who holds the whole film together with a discreet kind of charm, kindness and willing self-effacement.

"A.C.O.D." is written and directed with a sure hand, and if the editing sometimes feels a little anxious, that's understandable for a first feature. Zicherman's sensibility is subtle, graceful, scrupulously fair, and intelligent without having to make a show of intelligence. His first film is a model of what a modern film comedy might be. 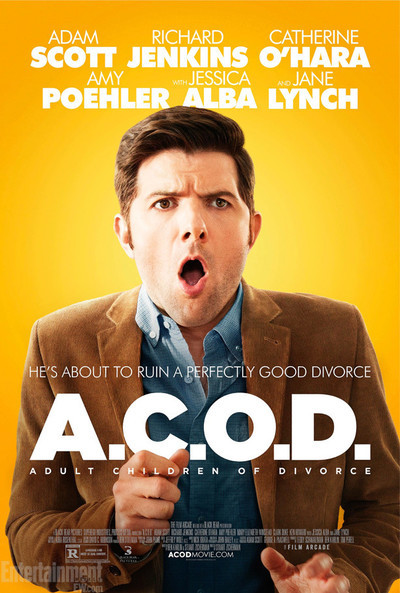