The cute factor in Netflix’s anime film “A Whisker Away” is bountiful enough, even if its love story of naive obsession is a little more than worrisome. One could say this is about the delusions of puppy love, but aha, they'd be wrong—"A Whisker Away" is all about cats.

In this film from directors Junichi Satoh and Tomotaka Shibayama, a girl named Miyo (Mirai Shida) turns into a cat whenever she wants to be close to Hinode (Natsuki Hanae), a young boy who doesn't share her same level of infatuation. But she can still get close to Hinode, and watch him work on pottery with his grandfather, by putting on a cat mask that instantly turns her into a white kitty with glacier-blue eyes. Thinking that the cat is a friendly stray, Hinode even names this cat after his beloved old pet Taro, a gesture among many that makes Miyo silently swoon.

In human form, Miyo has a big personality—she’s known derisively by her classmates as “Muge,” meaning “Miss Ultra Gaga and Enigmatic”—and is very forward with how she feels about Hinode, though is constantly clumsy about it. She even has an act called the Hinode Sunrise, in which she speeds towards Hinode and bumps into him butt to butt. Later on, as the mental lines of being a cat and simply acting like one become hazy, Miyo even jumps off a school roof to defend his honor against bullies two stories below, scraping herself up despite landing like a cat. The story is very sincere about her devotion, even though it makes one worry about young viewers getting the wrong impression—smothering your crush is simply a bad idea, as bold as emotional openness might be.

The villain of this story is a cat known as Mask Seller, who gives Miyo the ability to transform in a rushed opening scene. Always with a big grin on his face, Mask Seller is a mighty chunky, back-flipping, scene-stealing tabby that would make a killing on Instagram, but instead harvests the souls of cats and humans alike. When Miyo foolishly decides that she wants to stay in cat form in order to be close to Hinode and escape her buried woes (like the trauma of her mother abandoning her), Mask Seller does not dissuade her from it.

In all of its equal whimsy and romance, “A Whisker Away” has plenty of lessons—or depending on the audience, reminders—that it wants to impart. Namely, that a human wouldn’t want to trade lives with a cat, even if your crush seems to embrace you more in cat-form. And as it works through Miyo’s immaturity, the progressively clever script looks at Miyo's actions from the perspectives of others, as people realize that her exuberance is its own mask for her pain. But this film being as blunt with dialogue as it is, it also has a faceless teacher talk during a throwaway class moment about how “we can’t ever really know someone’s full emotion,” just in case we miss the way the third act underlines and puts it in bold later.

A wholesome fantasy built of serene settings and cute animals is more fun when it gets a little wacky, and thankfully “A Whisker Away” has some left-field ideas to make the tale more magical as it goes along. There are rules, secret pathways and more, as if the movie were building its own furry cosplay mythology. "A Whisker Away" gets particularly kooky when a real cat enters the mix, and gets some cute jokes out of what might happen if a cat took human form (like their lack of boundaries with humans, or how they'd sleep). And a trip to Cat Island later on has a startling appearance, its towering existence looking contrary to the one in real life.

But how is the straight-up cat content in "A Whisker Away"? Pretty good—I didn’t even get to a sassy household cat named Kinako, who has a distaste for Miyo that is nicely brought into the fold later. And then Cat Island, with its striking supporting cat characters—it's simply amusing to see some of these puffy, furry faces in larger form, even if they're sitting at a bar and expressing regret over their similar life choices. There’s also something warmly playful about a movie that imagines a human and a cat truly understanding each other, and what it might be like if our feline friends hung on our every word. 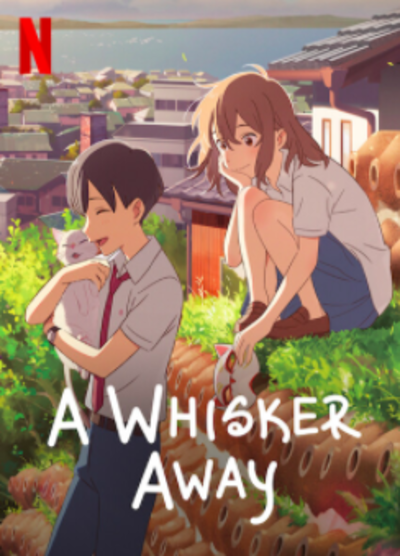