A Tale of Love and Darkness

The nation of Israel is born in the late 1940s amid chaos while a mother expires along with her hopes for a better life. The story of both events will one day be shared with the world by her cherished son, who grows up to be a writer.

“A Tale of Love and Darkness,” a bleakly poetic adaptation of Amos Oz’s 2002 memoir of his childhood spent in Jerusalem also marks the arrival of a new filmmaker in the form of Natalie Portman, who stars and wrote the script.

Considering that the “Black Swan” Oscar-winner was born in Jerusalem, is from a family of immigrants, speaks Hebrew and is both an Israeli and U.S. citizen, it is little wonder that she connected so strongly to the material. Such devotion came in handy since it took nearly eight years to find the funding to bring this subtitled labor of love to the big screen. In the meantime, the actress married and gave birth to a son, Aleph, now five—milestones that likely enriched her heartfelt yet decidedly melancholic performance as a romantic dreamer constantly disappointed by her real-life circumstances.

Told in flashbacks and narrated by an elderly Oz, we first see Portman’s Fania comforting her restless pre-teen child as they share a bed. This once-privileged daughter of a Jewish European family, who now resides in a lower-class suburb after fleeing to Palestine after the Holocaust, suggests to her son, “Let’s make up a story.” And so begins a bonding ritual that ignites Amos’ still-developing imagination and allows both of them to escape their less-than-perfect circumstances. Unlike the washed-out palette of their everyday existence, these fables are brightly hued while featuring such figures as a dashing pioneer hero and brave silent monks amid scenic outdoor settings.

Meanwhile, their daily routines aren’t quite as exciting. Fania is dutifully married to Arieh (Gilad Kahana), a bespectacled librarian who writes dull tomes that appeal to no one. The couple share little in common besides affection for their son and a desire for a free Jewish state. Feeling cut off from her past, she yearns for the companionship of her two sisters who reside in Tel Aviv. Instead, she must put up with a disapproving mother-in-law, who faintly praises the borscht she toiled over in honor of her husband’s first published book as being “good not bad” before disparaging it as being too sweet.

Fania uses the moment to later tell Amos that, if he ever has to choose between hurting someone’s feelings or telling a lie, he should “choose to be generous. It is better to be sensitive than honest.”

It soon becomes apparent that Portman is torn between turning her film into an eventual tragedy about her martyr-like character or a coming-of-age biopic about her character’s son, whose growing pains parallel those suffered by Israel. Novice actor Amir Tessler does well enough as the young Amos even though his most valuable asset is his ever-watchful eyes in a role that requires more reaction than action.

Tessler does manage to have impact in two standout scenes without Portman, whose own powerful yet distancing performance too often overshadows his. At one point, Amos goes to a party held at the home of an Arab family. Their pretty daughter takes a liking to him. He tries to impress her by declaring, “There’s enough room in this country for both peoples. We just need to learn to live together in peace and mutual respect.” She smiles and suggests he should be a lawyer based on the way he talks. But the accord between the children is shattered when Amos’ attempt to imitate Tarzan by climbing a tree ends with the girl’s toddler brother getting hurt when a swing breaks free—an obvious though somewhat effective metaphor for the conflict that continues to this day. Later, he will rely on his interest in Tarzan’s adventures again as he employs his ability to spin yarns to distract a gang of school bullies who want to beat him up.

For anyone expecting to learn details about the founding of Israel, there is a bare minimum of actual background beyond what is heard being transmitted by radio broadcasts and seen in newsreel footage. There is also little in the way of humor that might have managed to strike a welcome balance before the mood is enveloped by darkness as Fania begins to fall into a depression that eventually snuffs out her desire to live.

While Portman excels at sensitive depictions of smaller moments, she struggles to root her directing debut with a broader-scale “you-are-there” authenticity, one that grabs our attention and make us feel as passionate about this slice of personal history as she does. Still, as someone who was cast in her first film at age eleven, the actress has probably picked up more than a few pointers after working alongside such heavyweight helmers as Mike Nichols, Michael Mann, Woody Allen, Anthony Minghella and Milos Forman.

All it takes is one breathtaking shot near the conclusion of “A Tale of Love and Darkness,” when the aged Amos stares helplessly at his troubled mother through a pane of glass coated with teary rivulets of rain, to know Portman has an artistic vision worth sharing and developing. 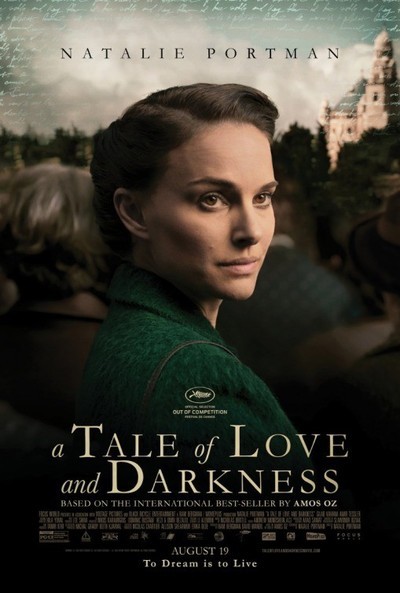 Rated PG-13 for thematic content and some disturbing violent images.