The debut feature by the sharp Tunisian filmmaker Mehdi Barsaoui, “The Son” begins with a depiction of the Arab world that seems deliberately designed to buck the preconceptions of Western viewers. Gathered for a picnic, some cosmopolitan Tunisians laugh, drink beer, tell dirty jokes (making sure the kids there are out of earshot), and speculate on politics. It’s fall of 2011, less than a year after the democratization of that country, and social life is looser than it used to be.

But things are still dangerous. After the outing, Fares (Sami Bouajila, charismatic and slow-burning), wife Meriam (Najla Ben Abdallah, Boujilla’s equal in charisma in a role that’s more fraught, in its way) and their young son Aziz (Youssef Khemiri) head off for a weekend in Tatouine. On the road in the afternoon, their car is ambushed by terrorists and Aziz is gravely wounded. He’ll need a liver transplant if he’s to live.

And now the wreckage of the past comes calling: the seemingly blissful marriage of Fares and Meriam, two very successful professionals, wasn’t always as blissful as what we’ve seen. They both strayed years ago, and now Meriam learns that Fares is not the biological father of Aziz. His liver won’t do for a partial donation. And Meriam’s the wrong blood type.

The estrangement that follows this revelation splits the narrative. Meriam searches desperately for the old flame who is Aziz’s birth dad. And Fares ...

Well, Fares is approached by a man who seems to be, like him, waiting for news of a patient at the hospital. Billed only as “The Businessman” in the credits, and played by a very subtle Slah M'sadak, He makes small talk with Fares at first. “This country is screwed” is one of his opening gambits. Eventually he gets down to cases. For $150,000 dinars (about 50,000 dollars), Aziz gets a new liver.

The Businessman draws Fares into his little web gradually. He shows him a state-of-the-art facility. He lies, elaborately, of where the organs come from. He presents himself and the organization he represents as do-gooders. And Fares, out of pride (wounded and otherwise), self-delusion, and other character defects that sometimes manifest themselves particularly devastatingly in males, winds up making a deal with the devil.

Whether he can extricate himself from it is one question that needs addressing in the movie’s last third. While “A Son” has allegorical parables with the political evolution of not just Tunisia but the whole MENA region, the first rate-acting, the very credible environments, and the straightforward, tight-as-a-drum direction make it hum with a directness that few social problem movies can muster. 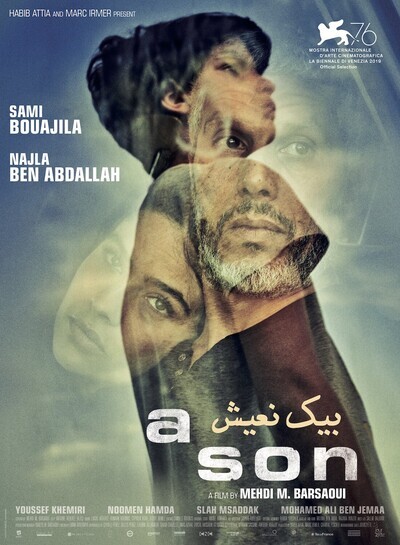