A Shaun the Sheep Movie: Farmageddon

To this longtime fan of the cheese-loving bachelor and his trusty dog, they will always be known as the company that gave the world the genius of Wallace & Gromit. But the legacy of Aardman has become more and more tied to another great character in the last decade, the wonderful Shaun the Sheep. A supporting character from the Wallace and Gromit shorts—he first appeared in 1995’s “A Close Shave,” a masterpiece you should see as quickly as possible if you have yet to do so—Shaun was given his own series in 2007, and quickly became an international hit. The show has run in dozens of countries, perhaps more easily identifiable around the world because of its lack of reliance on a little thing called dialogue.

Shaun doesn’t talk and the adults around him grumble like parents in a Peanuts cartoon, and the outright courage it took to make a dialogue-free kids movie based on physical humor was refreshing when he made the leap to the big screen in 2015’s “Shaun the Sheep Movie.” So much family entertainment relies on current pop culture references or set-up/punchline jokes, but “Shaun the Sheep Movie” owed more to the Marx Brothers than YouTube video stars. Sadly, I fear that most people in the United States aren’t even aware that a sequel, “A Shaun the Sheep Movie: Farmageddon” was released internationally last year, and has already made over $40 million. It’s getting relatively quietly dumped on Netflix today. If you like anything Aardman, or anything funny really, you should make an effort to find it.

Will Becher and Richard Phelan direct this sci-fi adventure for Shaun and his pals that makes its goofy, tongue-in-cheek intentions known from its opening frames, as a spaceship descends over an automotive business called “H.G. Wheels.” After some wacky hijinks that reveal how deeply bored Shaun and his ovine pals are—they spend most of their days tormenting Bitzer the dog on the farm, who is forced to put up an increasing number of signs regarding what the sheep are not allowed to do in an inspired sequence of scenes that set the goofy tone early—the plot of “Farmageddon” kicks in when Shaun stumbles upon an alien named Lu-La in the barn. Picture “E.T.-The Extra-Terrestrial” reimagined with Shaun in the role of the kid and an adorable blue alien in the title role and you’ll have some idea of the template of “Farmageddon.” Shaun has to keep the alien safe from the Ministry for Alien Detection, and hijinks start piling up.

There are hysterical subplots that play into the “Three Stooges Meets E.T.” aesthetic of “Farmageddon,” including the farmer's plans to create an alien-themed park that gives the film its name, but these films are, appropriately, hard to capture in words. They are really collections of cleverly-designed physical comedy sequences, and so a great deal of the success of the show and films comes down to timing. In terms of rhythm and pace, two things that so much children’s entertainment ignores in favor of non-stop noise, these movies are perfect. The team behind them knows when to let a moment sit and when to quickly cut to another one. They know when to hit a joke center and when to let one zip by in a way that you’ll only catch later. They may not be as visually daring as Laika or philosophically challenging as the best of Pixar, but Aardman’s skill with comic timing is unmatched.

I have to admit to missing a little of the simplicity of the first Shaun the Sheep movie on initial viewing of “Farmageddon.” That movie’s plot or lack thereof was part of its charm—it was just about a loyal sheep and his farmer in the big city—and this one can feel a little cluttered, especially during its montages. Although the “clutter” is the kind of thing that will appeal to adults raised on movies of the ‘80s—“E.T.” isn’t the only obvious influence; there are other Spielberg nods all over this thing. Moreover, on second viewing, I appreciated the unique nature of “Farmageddon” more distinctly. It’s just funny, sweet, and smart—three things that this father of three doesn’t get to say often enough about entertainment while watching movies with his kids. While it is a bit tragic that a movie that takes this much visual acuity and includes the work of hundreds of people just to make Shaun move his goofy mouth will never be seen on the big screen, at least you too can watch it more than once on Netflix. 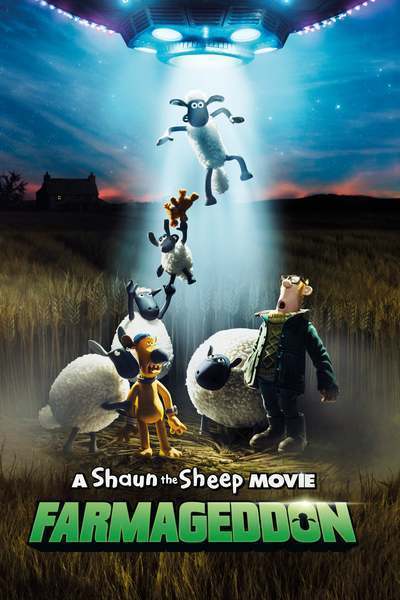