One of the more foolhardy stunts ever pulled by a major Hollywood studio in recent years was forcing Aardman, a conclave of exceedingly clever Brits who are considered by many as the supreme purveyors of the clay-manipulating process of stop-motion, to release a pale computerized imitation of one of its trademark efforts in 2006.

Its title? “Flushed Away.”

You remember it, right? No? It’s better if you don’t.

Hugh Jackman voiced a posh pet rat who discovers a underground city teaming with rodents in the London sewer system. Apparently, the amount of water scenes required was deemed too tricky to be successfully captured by Aardman’s meticulously hand-crafted artistry. That same artistry, however, was behind the sleeper success of 2000’s “Chicken Run” and 2005’s Oscar-winning “Wallace & Gromit: The Curse of the Were-Rabbit,” where the tactile feel of the human touch can be subtly sensed as the figures onscreen are painstakingly brought to life. Needless to say, the compromised “Flushed Away” pretty much lived up to its name at the box office.

It took another, better computer-animated film, 2011’s “Arthur Christmas,” before Aardman learned its lesson and returned to doing what it does best, making exceedingly amusing films with pliable characters. As much as movie theaters these days are overrun with ‘toon blockbusters that are bold, bright and brassy blasts of hyper-charged entertainment that barely take a breath, stop-motion is a different animal, one that feels innately multi-dimensional even without 3-D because it is created with physical objects. And Aardman, who gave the world such dryly witty wonders as the 1989 short “Creature Comforts” as well as the long-running man-and-his-dog comedy duo of Wallace & Gromit, takes a stealthier, more-assured approach that is found in wild-and-woolly abundance in its latest triumph, “Shaun the Sheep Movie.”

Based on a long-running TV series consisting of shorts that take place on a quaintly cozy patch of northern English countryside known as Mossy Bottom Farm, this brisk 85-minute serving of visually piquant capers owes as much to Warner Bros.’ Sam the Sheepdog and Ralph the Wolf as it does to Buster Keaton, Rube Goldberg, “Babe: Pig in the City” and those Serta mattress ads (whose sheep are designed by Aardman, by the way). With zero actual dialogue, “Shaun the Sheep Movie” is a silent film—except that the soundtrack is overrun with noises (mumbled gibberish, growls and bleats) and gags involving audio effects and thematically-on-the-nose music.

But most of the communication comes in the form of the expressive faces of its cast. Shaun is the rascally leader of a flock of eight, including baby Timmy and chubby ewe Shirley, owned by a ginger-haired middle-ager who is bald, bespectacled and none too astute. Simply known as the Farmer, he remains blissfully oblivious to his sheep’s penchant for human-seeming behavior such as walking on two legs and engaging in elaborate schemes hatched by Shaun. Bitzer, the put-upon bulbous-nosed sheepdog who is outfitted like a track coach, regularly attempts yet only partially succeeds to keep Shaun and his cohorts in line. Other regulars who make an appearance include the Naughty Pigs and an opportunistic duck.

As the movie begins, a certain malaise has settled upon the farm’s residents, who are clearly weary of their everyday rural routine. Leave it to Shaun to come up with a way for the sheep to take a break. Unfortunately, their prankish efforts cause the Farmer to fall asleep in a caravan that accidentally becomes unmoored and ends up rolling into The Big City, which we can assume is London. The sudden disappearance of their master leaves Shaun and the sheep bereft—not the least because they can’t feed themselves.

Plus, as a sweetly nostalgic prologue reveals, the Farmer is really the only father figure that they have ever known. Shaun sneaks onto a double-decker bus to hunt him down and the rest of the sheep follow—as sheep are wont to do. Also on the scent of the trail is a distraught Bitzer, who locates the Farmer in a hospital where he has been diagnosed with memory loss. Eventually, he ends up aimlessly wandering through the urban landscape until he stumbles into momentary fame.

There is a villain in the form of an over-eager “animal containment” officer who is bedeviled by the wads of snowy fleece he keeps finding on the street. But most of the plot builds upon humorous set pieces that escalate usually with chaotic results inside of a charity shop, a fancy restaurant, a pricey hair salon and an animal compound that looks like a jail.

The plot is simple enough for a preschooler to follow as are many of the jokes. How delightful is it that the sheep take full advantage of their ability to put humans asleep by circling around a barrier that they leap over one by one. To paraphrase “The Patty Duke Show’s” TV theme, any bone is bound to make Bitzer lose control. Yes, the Aardman-ites provide a full contingent of butt sight gags as well as bodily function hilarity, but they never feel desperate or excessive.

And adult cineastes will be able to giggle knowingly at references to “Cape Fear,” “The Night of the Hunter” and—most appropriately—“The Silence of the Lambs.” Banksy-like graffiti graphics, multiple acts of fist bumping (and, in the case of lobsters, claw bumping) and a dig at social media—that’s about as au currant as such references get. As a pushover for this distinctly Ol’ Blighty brand of comedy, the chuckles came early and often for me. There is something in the way that the sheep’s mouths unhinge and slip sideways whenever they emit an utterance or simply smile that I find charmingly ingenious in its physiological impossibility.

While the shorts have an undercurrent of antagonism, there is actually a warm and fuzzy feeling of loyalty and affection shared between Shaun, the sheep, their canine frenemy and the Farmer. They are, whether they always like it or not, a family. A message supporting pet adoption even sneaks into the proceedings thanks to a mangy street mutt who assists the sheep. But laughter is the main goal here. Pixar might have uncovered the mysteries of our brains with “Inside Out.” But Aardman knows its way around our funny bones. Just keep Bitzer away from them. 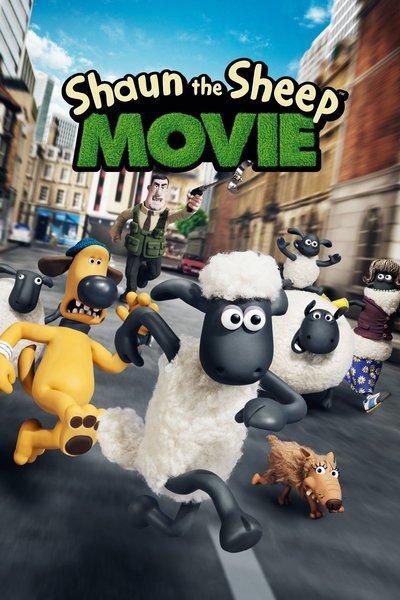 John B. Sparkes as Bitzer and Farmer (voice)