A Score to Settle

“Acceptance is the key” is a primary adage in many twelve step programs, and it can prove pretty useful in film assessment also. For instance, there’s no point in fighting ourselves or anybody else about Nicolas Cage’s role choices anymore — nor, really, has there ever been. For reasons known best to himself, his agent, and perhaps the Internal Revenue Service, the man’s going to go where he goes. Sometimes this leads to the inspired mania of a “Mandy,” while other times it leads to the inept bathos of “211.” And there are a lot of other places in between, considering the some-would-say-profligate frequency of his output.

“A Score to Settle” falls more on the not-good column of the Cage ledger, but because I’m practicing acceptance, I’m of a frame of mind not to come down too hard on it. The movie, directed by Shawn Ku from a script by John Stewart Newman, does try to do something new. The picture opens with Cage getting a prescription to help with his insomnia; he’s loath to start using it because it’s a controlled substance. His doctor tells him that his condition will bring on hallucinations, dementia, and more, and so it’s important to sleep whether he’s comfortable with controlled substances or not. The condition is so critical that it’s the reason he’s being released from prison.

His character, Frank, has been in stir for almost twenty years, for reasons partially articulated in bloody flashbacks. He is sprung from prison in the dead of night; walking up a road, he meets his now-adult son, Joey (Noah Le Gros), and they chat as they walk. This seems unusual, and it is — think too hard about it and you’ll be able to figure out the movie’s most substantial reveal.

The backstory unfolds to justify the title — Frank did the time for another man’s crime. And he got money for it, and Frank is happy to spend it on himself and Joey, opening the film up to several “Rain Man”-in-Vegas style scenes of big spending. Frank gets his first iPhone, then Frank has his first girlfriend-experience-style hookup with a sad-eyed sex worker named Simone (Karolina Wydra). But by night Frank is tracking the guys who set him up, relying on a onetime colleague gone straight (Benjamin Bratt). And also contending with hallucination and bouts of mania.

That’s the do-something-new part: making old age the active enemy of the gangster in the sunset. We’ll likely be seeing more in this mode soon, as actors who made good playing rooting-interest bad boys motor past retirement age. I expect more than one remake of a ‘50s Jean Gabin film. But these flourishes don’t make the clichés all that less familiar-feeling.

The movie does gain in stature just by letting Cage be Cage. When he’s riding in a car right after his release, Frank rolls down the window feeling a breeze on his face. Cage puts on that “shine sweet freedom” expression he used at the end of “Con Air.” If you’re a fan of the actor, this is a moment when all is right in the world. 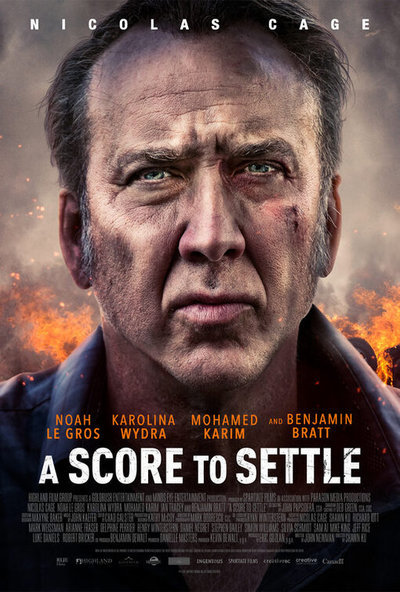