Having made the splendidly entertaining "Cinema Paradiso" in 1988, Giuseppe Tornatore now exhibits his versatility with "A Pure Formality," which is not entertaining at all. This is a grim, relentless, depressing shaggy dog movie with a surprise ending that explains everything - and, therefore, nothing.

The movie opens with a gunshot, and then with a man running desperately through the rain. He is stopped by policemen, who bring him to a command post, which is in a shabby house in the middle of a wet and gloomy forest. What is his crime? Has he committed a crime? Has a crime been committed? These and many, many other questions will be pondered before his interrogation is over.

The man is played by Gerard Depardieu, that most dependable and familiar of French actors, and the inspector (known only as the Inspector) is played by Roman Polanski. It will help if you are familiar with the interesting careers of Depardieu and Polanski, since then you can think about them while watching the screen.

Anything to pass the time.

Most of the film takes place within the same leaky room.

Water drips from the ceiling into buckets on the floor. Younger officers come and go, and an old man mops up and shakes his head sadly. We learn that Onoff, the Depardieu character, is a famous writer, and that the Inspector knows most of his work, great swaths of it by heart. We also learn that Onoff has led a complicated life, not always to the highest standard, and that the Inspector may be judging him for more than the events of a single evening.

Now about that name. Onoff. On. Off. Is it symbolic? It could be. Yet the film is in French, by an Italian director, and the wordplay is in English. That is permitted, I suppose, since French words sometimes make puns in English movies. If it is symbolic, it symbolizes something terrifically obvious, and the same can be said for the movie.

The performances are fine. They are not at the service of interesting material. Polanski himself, at about the same time, made "Death and the Maiden," a similar film about a long night's conversation and interrogation. It is much better.

By the end of the film, amid reminders of Kafka and Beckett, we learn the answer to the strange night's interrogation. Some members of the audience will have guessed it. Others will have feared it. Few will find it worth the wait. 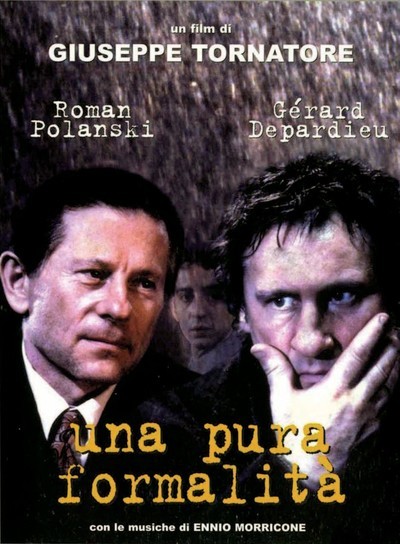 Roman Polanski as The Inspector