Mary Shelley never got the credit she deserved when she was alive and still struggles to get the right attention in the Shudder original “A Nightmare Wakes,” a film that purports to shed light on the creation of Frankenstein but comes off like a flat, almost insulting version of a writer’s legacy. Written and directed by Nora Unkel, “A Nightmare Wakes” feels like a film that went through so many rewrites and producer notes that it just lost its way, uncertain how to merge tropes of the biopic genre with the vision of a horror director. At times, it’s a relatively straightforward period piece about the fateful summer in which Shelley wrote one of the most influential fictional works in history. However, it also tries to dig into horror itself, presenting the formation of Frankenstein as a vision of a woman on the brink of sanity, which in itself reads like kind of an insult. Yes, this is another story wherein a woman going crazy stumbles into genius, which would be problematic enough but is hampered even further by amateurish performances and inconsistent direction.

Alix Wilton Regan plays Mary Shelley in the summer of 1816, secluded at Lake Geneva with her lover Percy Bysshe Shelley (Giullian Yao Gioiello), Lord Byron (Philippe Bowgen), Claire Clairmont (Claire Glassford), and Dr. John Polidori (Lee Garrett). Percy Shelley was married at the time, but Mary was also pregnant with his child, a baby that she loses early in “A Nightmare Wakes,” sending her down a spiral of grief and depression that includes nightmarish visions that inspire the story she’s been challenged to write. Everyone in the mansion is writing a horror tale—only Mary’s will change the world.

At times, it seems like Unkel has absolutely no interest in making a horror film, weaving themes of jealousy, sexuality, and sexism into a relatively straightforward drama. Unkel's historical accuracy in terms of craft is sometimes admirable, but the film doesn’t work because the performers never come off as believable people from this period. The ensemble is startlingly lifeless in terms of mannerism and emotion, as if they think that’s how people behaved in 1816. It gives the whole project a feeling of bad community theatre. I’m not usually the kind of critic who digs into bad performances—they’re just as often the fault of the director and not the actor—but it’s hard to avoid here. It all makes for a very long 90-minute film.

And then there’s the horror film wedded to this drama of depression and the writing process. Unkel’s main technique is the dream sequence, suggesting that Unkel’s unconscious mind influenced her work by connecting the real issues in her life to the kind of terrifying images that come to us in the middle of the night. Reapproaching the stale genre of the biopic by filtering it through a horror world that its subject helped define is an admirable, interesting premise for a film, but Unkel and her team never find the right tone. “A Nightmare Wakes” is likely to put you to sleep. 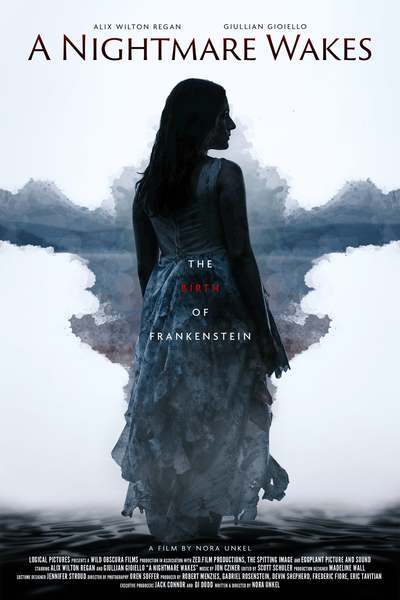