A Murder in the Park

Besides being a riveting true-crime story, Shawn Rech and Brandon Kimber’s “A Murder in the Park” is a film that makes a powerful case that some cherished liberal beliefs aren’t always congruent with the truth; in fact, sometimes they are the exact opposite.

In this instance, some of those beliefs concern the actual innocence of black criminals convicted of serious offenses; the corruption of police officers who investigate such cases; and the sagacity and altruistic nobility of journalists seeking to exonerate reputed victims of the criminal justice system.

In “A Murder in the Park,” those views are stood on their heads. Here the crusading liberal journalists are deeply foolish or deeply corrupt, or both. The police are innocent and abused. And the bad guy really is the bad guy.

The film opens with a scene that seems too good to be true – and in fact, is. Anthony Porter, a black Chicagoan sentenced to death for killing a black couple late one night at a public swimming pool in 1982, is released from prison just when he was supposed to be executed (the wardens had already asked what he wanted for his last meal). He rushes out of the prison gates and into the jubilant embrace of his last-minute saviors: Northwestern University journalism professor David Protess and his students, who produced evidence that Porter was innocent and the crime was actually committed by another man.

As we soon learn, Porter’s 1999 release after 17 years in prison fit right into the media and political climate of the moment. Chicago newspapers had been full of stories of police corruption, falsified investigations, coerced confessions and judicial malfeasance. So the story of an innocent man almost executed was another instance of such horrors, one that in fact led to the cessation of the death penalty’s use in Illinois.

There was just one problem, though, as we hear minutes into the film: Subsequent investigation proved conclusively that Porter was guilty and that the case for his innocence was a fantasy turned into bogus evidence by Protess and his students, whose work later got an innocent man sent to prison for the murders Porter committed.

The film then jumps back to 1982 to show how the murders and their investigation unfolded originally. It was a hot August night when Jerry Hillard and Marilyn Green were sitting in the bleachers of that public pool and someone came up and shot them five times at point-blank range, then ran away. Anthony Porter was stopped by a cop leaving the scene but was not held because he didn’t have a weapon.

It wasn’t long before four witnesses – two pairs of young male friends – turned up. They had all been at or near the pool and said they had noticed Porter and another man sitting on the bleachers near the couple. They all knew Porter from the neighborhood; they describe him as vicious, violent and scary. When the four heard the shots that killed Green, they looked up and saw Porter fire his pistol at Hillard’s face and then flee.

The description of the investigation that followed, which includes interviews with the witnesses and the police who worked the case, can’t help but impress viewers with the care and scrupulousness that good cops put into their work. The case against Porter was airtight, his conviction deserved.

Seventeen years later, though, when Prof. Protess and his students went looking for convicts to exonerate, Porter was happy – big surprise – to claim innocence. From prison, he put out the story that the murders were actually committed by one Alstory Simon, a friend of Green and Hillard’s who had been with them earlier in the evening.

The students turned in evidence showing that the witnesses couldn’t have seen the crime from where they were. Only problems were, the kids didn’t know where the murders were actually committed, and the visual obstructions they pointed to weren’t there in 1982. The students also didn’t bother interviewing most of the witnesses. The one who was approached was pressured into recanting his testimony.

Similar tactics followed. Protess’ investigator, Paul Ciolino, even posed as producer Jerry Bruckheimer in promising one person a movie deal in exchange for the desired testimony. Simon’s embittered ex-wife was induced to accuse him of the crime (testimony we see her recant on her deathbed). And finally the corker: Ciolino and a cohort burst in on Simon one night after he’s been doing crack cocaine for three days and browbeat him into making the false confession that sends him to prison after Porter’s release.

This tale of political correctness run amok contains some truly unsavory characters, but none more so than a certain professor who was on the faculty of one of nation’s most prestigious journalism schools for 30 years. This teacher of “advocacy, not journalism,” as one person puts it, comes across as an upper-crust sleazebag sprung straight from some conservative columnist’s nightmares.

No doubt “A Murder in the Park” presents only one side of the cultural coin, as it were. Perhaps it should be shown on double bills with Ken Burns’ superb “The Central Park Five,” which shows the other side. But one thing is certain: it demands to be screened in every journalism school in the country. 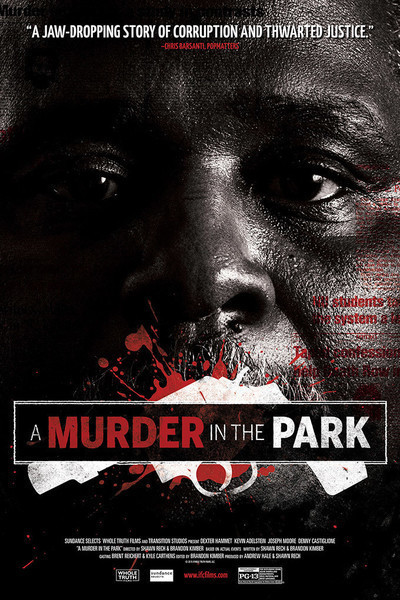