A Million Ways to Die in the West

Unexpected success often leads to creative disaster. With no one there to edit his extreme tendencies, to tell him casting himself in the lead might be a mistake, to warn him that breezy comedies shouldn’t be nearly two hours long, Seth MacFarlane’s carte blanche that came with the box office success of "Ted" proves to be his undoing. The mistakes made in the production of "A Million Ways to Die in the West," reminiscent of the worst comedic tendencies of the Happy Madison crew, feel like a byproduct of a man-child allowed to do whatever he wants because it worked last time. A failure on nearly every level, "A Million Ways to Die in the West" almost approaches so-bad-you-need-to-see-it categorization. There are scenes/jokes that hit the dusty ground of Monument Valley with such a remarkable thud that no one in the preview audience with whom I saw the film laughed. Not one person. Which leads one to ask, how did they make it through the editing/post-production process? As we so often ask ourselves with awful comedies, did they really think this was funny?

In the first of several bad decisions, the charmless MacFarlane (a talented writer in the prime of "Family Guy" but completely unengaging as a leading man) plays Albert Stark, a sheep herder living in the dangerous time of 1882 Arizona. As he points out repeatedly—MacFarlane never wrote a joke he only wanted to tell once—Stark’s world is a deadly one. Cholera, wolves, gunslingers, runaway bulls, exploding flash bulbs; there’s always something to kill you on the Wild West frontier. Written with the kind of meta awareness of what’s happening around him that makes him feel like a time traveler, Albert is an antisocial, lonely guy, especially after his wide-eyed girlfriend Louise (Amanda Seyfried) leaves him for the daringly mustachioed Foy (movie-stealing Neil Patrick Harris, who can do more with a raised eyebrow than MacFarlane can with an entire monologue).

Albert’s life changes when Anna comes to town. Played by Charlize Theron with a winsome charm that the film doesn’t deserve, Anna sees something in Albert, encouraging him to see how great he really is deep down inside, even though MacFarlane never wrote that into the character. Yes, "A Million Ways to Die in the West" is about a man who gets dumped by one girl only to have a beauty of Theron’s caliber inexplicably fall head over cowboy boots for him. It’s a movie about how great Albert is and yet MacFarlane forgot to make him interesting. I’d actually rather hang out with Louise and Foy. Or even buddy Edward (Giovanni Ribisi) and his prostitute girlfriend (Sarah Silverman), who don’t have sex even though she sleeps with a dozen guys a day and schedules appointments for anal. Again, if you find that joke funny, good news, it will be repeated multiple times.

Anna has a secret: she’s really the wife of the notorious Clinch Leatherwood (Liam Neeson), a man in black who is riding to town to…you know, I have no idea. MacFarlane can’t even be bothered to really set up a film that deconstructs the Western in any sort of narrative sense. He has too many piss jokes to tell. Don’t get me wrong. I don’t mind a bit of envelope-pushing when it comes to taste in comedy but there’s a difference between being edgy and just thinking that the word poop is inherently funny. And, worst of all, MacFarlane telegraphs every joke before he tells it. He’s the kind of guy who is so in love with the punchline that he forgets the set-up. A bit about a family not smiling in a photo at the county fair would be funnier if wasn’t a repeat from ten minutes ago. Ditto a bit about quack doctors. Ditto everything after the first scene with Ribisi & Silverman. The throwaway bits produce the film's only chuckles because they don’t feel underlined, repeated, highlighted and accompanied by a neon sign begging you to laugh.

It doesn’t help that MacFarlane brings zero filmmaking style to the film. Perhaps he was too distracted by his performance to notice that "A Million Ways to Die in the West" looks like a TV special. There were times where I was convinced that he was going for a purposefully constructed aesthetic like an old-fashioned Western and times where I think he was just being lazy. It doesn’t have to look good, right? As long as we get people talking with our gross-out humor, everything else will be forgiven, right? Did you hear the one about the writer/director whose success blinded him to what people liked about his first movie? It’s not that funny. 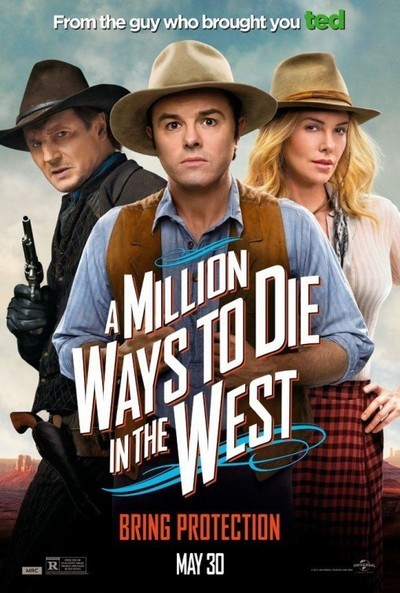 Rated R for strong crude and sexual content, language throughout, some violence and drug material