Hans Gruber should stage an intervention

According to the "Die Hard" wiki, John McClane has killed a total of 58 people in the first four "Die Hard" films.

That number seems low, but let's go with it.

So since 1988, when the youngish Det. McClane took that cross-country flight to see estranged wife Holly and wound up singlehandedly quashing the terrorist Hans Gruber and his numerous badly coiffed henchmen (that one guy looked JUST like Huey Lewis), he has killed nearly 60 people, and thwarted hijackers and terrorists. Plus, he's an alcoholic, his wife is now long gone, he has sustained more injuries than all starting quarterbacks in the NFL put together — and he has experienced enough violence to be a first-ballot entrant in the cinematic Post-Traumatic Stress Disorder Hall of Fame.

You'd think McClane's kids would give him a break for not being there for every dance recital and Little League game, but in "Live Free or Die Hard" (2007), it took an attack by a team of cyber-terrorists to reunite him with his estranged daughter. Now, with "A Good Day to Die Hard," McClane has to go all the way to Russia and battle yet another bunch of ruthless master criminals and their henchmen just to get a little closure with his son, to whom he hasn't spoken in years.

Granted, in the original "Die Hard," John and Holly probably wouldn't get back together without Hans crashing the Nakatomi holiday party. But director John McTiernan delivered a first-rate action film that became an instant classic: the perfect vehicle for Willis to showcase his wise-ass but slightly vulnerable persona. "Die Hard" worked because we got to know McClane (and the bad guys) before the body count started piling up.

A quarter-century later, McClane has been stripped of any real traces of an actual three-dimensional character. We feel as if we're watching Bruce Willis in a Bruce Willis movie in which Bruce Willis can survive anything while taking out the villains, video-game style. "A Good Day to Die Hard" hits the ground shooting, never giving us a chance to get the least bit involved with any of these characters, including McClane's now-grown son, Jack (Jai Courtney), who keeps reminding "John" (as he persists in calling his dad) he was never there for him, even as they team up to take down a number of high-level Russian thugs.

McClane thinks he's going to Russia to save or at least his support his son, who's been charged with a serious crime, but within 15 minutes of his dad's arrival, Jack has seriously botched an undercover mission.

That's right: Jack McClane is working for the CIA. Somehow Pops, who's been pretty good at solving complex mysteries since the days when he was waiting for important faxes at Dulles airport, had no idea the kid was a top-level undercover spy.

There was some reason for optimism about this film. I'm a huge fan of the original, and I've enjoyed most of the sequels, even the ludicrous "Live Free or Die Hard." The R rating for "A Good Day to Die Hard" told us they weren't going to skimp on the raw language and the quality kills. And it would be interesting to see where John McClane was in 2013.

Well. Turns out McClane's back with the New York City police department, where he's been since the mid-1980s, give or a take a few years off for suspensions and other setbacks. And he's still fond of the "yippee-ki-yay" punch line, though it's wasted in shameful fashion in this film.

You'd think McClane would be retired from the force, perhaps enjoying the accolades and wealth that should come the way of a man who has fended off four separate major acts of terrorism over the last 25 years. No such luck.

Like the Bond movies, the "Die Hard" films thrive on brilliantly wicked villains. In this edition, we barely know which bad guy is the main bad guy. The script is filled with heavy-handed dialogue about parents and their children, framed by well choreographed but generic action sequences.

We're told another "Die Hard" is in the works. I remember sighing when I heard there was another "Rocky" movie due in 2006 — but "Rocky Balboa" turned out to be a surprisingly powerful and worthy final chapter in a franchise that had lost its way.

Here's hoping the next "Die Hard" provides a similar kind of redemption. John McClane deserves a much stronger salute as he rides off into the sunset. 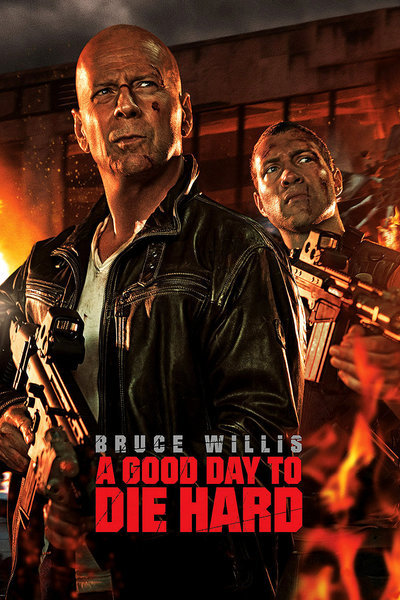