A Fantastic Fear of Everything

Jack (Simon Pegg) is a writer. Or, he was. He wrote a popular children's book about a sensitive hedgehog named Harold. He blames that book for ruining his marriage. When "A Fantastic Fear of Everything" opens, Jack is currently working on a project called "Decades of Death", a study of Victorian-era serial killers, the "Golden Age of murder". He cannot leave his flat in Hackney. He sleeps clutching a knife. Jack is afraid of everything, of being murdered, of launderettes, of eyeballs, of Christmas carolers, of the telephone ringing, and every other casual thing that comes up in life.

"A Fantastic Fear of Everything", directed by Crispian Mills (with animation sequences directed by Chris Hopewell), is a fascinating and uneven horror-comedy, strange and ambitious, anchored by a tour de force performance by Simon Pegg. Pegg, obviously, is well-known to fans of Edgar Wright's films, as well as his appearances in blockbuster franchises like "Mission: Impossible" and "Star Trek", but here, he is basically given a one-man show. He is in every scene, clad in filthy underpants and an open silk robe. He is a phenomenal physical actor. Watching him work is the primary pleasure of "A Fantastic Fear of Everything." Similar to "Barton Fink," another hallucinogenic story of a writer haunted by his own unfinished projects and lost opportunities, "A Fantastic Fear of Everything" examines the creative process as seen through the eyes of a writer gone completely mad.

Jack is a wreck when the film opens, and his condition deteriorates from there. Fleeing from shadows in his own gloomy flat, it is hard to believe that Jack was ever together enough to have had any success as a writer, let alone be someone's husband. "A Fantastic Fear" is best when it explores what it is like inside a paranoid mind, a man so bewildered by the simple tasks of life ("I've never bought a toilet roll!" he cries in a panic to his agent) that he cannot leave his house.

The first half of the film features Jack gearing up for a lunch with his agent (deliciously played by Clare Higgins), and then the fallout from that meeting, where she tells him a producer from Hollywood is interested in his "Decades of Death" project. All he needs to do, the only thing, is put on a suit and meet the guy for dinner. But once he is back in his flat, the hallucinations take over again, and he becomes convinced that the Hollywood guy is somehow related to one of the grisly Victorian murderers on his wall. At any rate, the situation goes south, and his panic is exacerbated by the fact that he does not own a suit, his socks are filthy, and he is afraid of going to the laundromat. Mills and the production design team pull out all the stops in the first half, filming Pegg in a distorted and fantastical way, so that never once are we outside his delusional viewpoint. Shadows loom around Jack and cloaked figures seem to float at the end of the dark hallway. Six innocent Christmas carolers on the stoop are filmed as though they are portents of evil doom. As awful as the situation is for Jack, Pegg is so funny and so committed to the performance that the psychotic break becomes hugely entertaining.

"A Fantastic Fear of Everything" goes off the rails in its second half, when Jack ventures out to wash his socks, shirt, and underpants at a laundromat. He is so frightened that the fellow customers at the laundromat stare at him with what seems to be hostile intent. The situation, which starts out humorously (made even more so by the fact that Jack has accidentally Super-glued his huge knife to his hand), drags on so long it becomes actually interminable. It is as though once Jack leaves his flat, so rich with psychodrama horror-movie potential, "A Fantastic Fear of Everything" doesn't know what film it wants to be anymore. There are still some very funny moments, and the script is often hilarious. Only Simon Pegg could make the screamed comment "This is a CELLAR" funnier with every repetition.

As the film galumphs awkwardly towards its ending, with flashes of visual brilliance like intermittent lightning, events start to dovetail, and there are scenes with a Freudian psychiatrist (wearing an eyepatch and a pirate's hat), and a pretty girl who shows up at the laundromat (Amara Karan, well-known for her performance as Rita, or "Sweet Lime", in Wes Anderson's "The Darjeeling Limited"), as well as an actual serial killer on the loose who just wants to be loved because he was abandoned as a child. The film is too cynical to play any of this sentimentally: the "wounded inner child" sub-plot is obviously supposed to be snarky and ironic, and it is. But the film is haunted by its superior first half.

"A Fantastic Fear of Everything" is not, actually, fantastic, but it was inventive enough to hold my interest, weird enough to be intriguing, and bold in some of its visual experiments. At the center of it all is Simon Pegg; terrified and manic, talking to himself, racing around in stained Fruit of the Looms, kitchen knife glued to his hand. It is a compelling and comedic portrait of creativity, obsession, and psychosis. 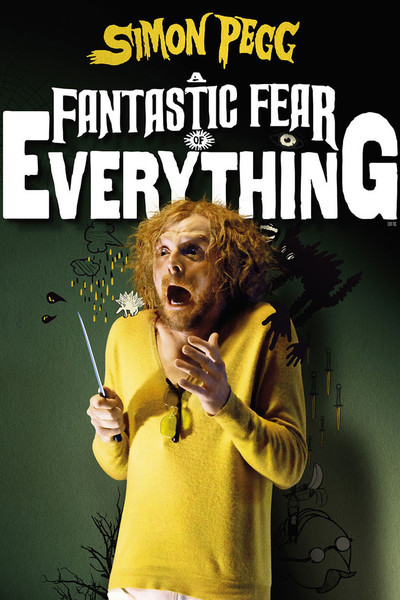 A Fantastic Fear of Everything (2012)