A Cure for Wellness

I keep forgetting the title of “A Cure for Wellness” and calling it “The Color of Despair.” It’s an accurate mistake.

As directed by Gore Verbinski ("Pirates of the Caribbean: The Curse of the Black Pearl," "The Lone Ranger"), this film about a New York financial wiz (Dane DeHaan) getting trapped in a creepy Swiss clinic wants to be sickly-dreamy horror epic. It’s a black-and-white movie done in color. Bojan Bazelli's stark photography  creates pools of blackness and acres of negative space. Jenny Beavan’s retro-gothic costuming and Eve Stewart’s production design favor ash, bone, eggshell, curdled cream, and shades of green ranging from bile to moss. If you could nick a David Fincher film’s throat, hang it upside down, and bleed it for two days, it would look like this movie. As a fetish object, it’s impressive.

But as a fully satisfying feature-length drama, it’s a bust. And it’s iffy as a visionary spectacle, too, because it’s too long and over-scaled, and its control of tone and theme never matches the care that has been lavished on its production. This is all a shame, because there’s much to admire in “A Cure for Wellness.”

DeHaan has just the right look to play the main character, Lockhart, a corrupt young East Coast WASP who travels to Switzerland to find a missing company executive but ends up trapped at a “wellness clinic” run by a German-accented doctor named Heinrich Volmer (Jason Issacs). DeHaan looks like he could be Dylan Baker’s long lost son, all milky angularity and cold stares. He has that look that casting directors go for when they’re hiring prep school jerks or Nazi youth. The actor’s straightforward performance, by turns entitled, baffled, terrified and ashamed, makes Lockhart a punching-bag hero, the kind who exists mainly to suffer horribly before achieving an enlightenment that looks a lot like comeuppance.

Lockhart is insufferable at first because he’s supposed to be. There’s a sense in which he deserves the miseries inflicted upon him because he’s a snotty capitalist swine who would otherwise grow up to be another Ebenezer Scrooge, and he’s representing a system that produces Scrooges by the millions. Verbinski and screenwriter Justin Haythe (“Revolutionary Road,” “The Lone Ranger”) seem at times to be making a statement about the vampire-like hold that the cultural memory of Europe still has over many rich and powerful Americans. Lockhart’s predecessor went to the clinic “to take in the waters”—which, as another character notes, is a very nineteenth century thing to do—and the all-white denizens of the place seem awed by the very existence of Volmer, a handsome gadfly who has the chiseled looks of an old movie Gestapo officer but carries himself like an ambassador of reason. The clinic grounds are a replica of an identical place that burned down decades ago on this very spot—there’s a backstory involving taboo hideousness—and there are recurring situations that pivot on insularity, hatred of outsiders, and the purity of bloodlines. (Mia Goth, who plays the doctor’s daughter, is the ultimate expression of the film’s anemic vision: she looks haunted and starved yet somehow also glamorous.)

This is a fine starting place for a social satire and also a fine thematic flavor for a compact, dreamy horror movie. There are real ideas here, good ideas even, but they remain tantalizing but insufficiently shaped.

It’s only during the last half-hour—a succession of over-the-top set-pieces that I loved, and that many colleagues found trashy and excessive—that “A Cure for Wellness” attains the level of bug-nuts wildness that it possibly needed all along. Verbinski isn’t bad at psychological and atmospheric horror, but he’s often at his most original when he’s letting it all hang out in sequences of clockwork suspense and ridiculous action, which is why the slapstick sequences in the “Pirates of the Caribbean” movies, the chases in “Rango” and the last 45 minutes of “The Lone Ranger” represent Verbinski at his most Verbinskian. It’s in the maybe narratively-unnecessary final half-hour that “A Cure for Wellness” finally starts drawing the kinds of connections (through sheer excess) that give it a distinctive personality, such as a cut from a decadent, repulsive character whirling in circles after sustaining an injury to a group of clueless rich folk waltzing in a grand ballroom.

And the two-and-a-half hour running time is too much even by standards of too-muchness. It’s ironic and unfortunate that the movie models so much of its look on German Expressionist silent movies and 1930s Universal horror films, because those tended to be short and lean. Very long horror movies often reach a point of diminishing returns no matter how skillfully the filmmakers sustain a mood—“The Shining” is a rare exception, though even that one has detractors—because they give you time to think about the concept and fixate on plot holes, judgment errors and other imperfections.

Verbinski is no Stanley Kubrick, although there are moments when he comes close. There are sequences involving eels that make eels seem even creepier than they did already, and a dentistry-as-torture scene that makes the one in “Marathon Man” look like a routine cleaning. I could easily imagine a version of “A Cure for Wellness” that’s all suggestion and understatement, and one that’s essentially the madcap finale played out of the length of a feature, climbing to nosebleed heights of bad taste and unfurling a freak flag at the summit. Either would have been preferable to what ended up onscreen, a rag-and-bone shop of notions.

What’s most conspicuously absent here is Kubrick’s lordly, even naughty sense of humor. “A Cure for Wellness” aims for black comedy often, but rarely manages anything more sophisticated than the sick joke comic rhythm of, “What’s the worst thing that could happen to this character?” followed by, “Here it comes.” Lockhart’s suffering grows dull through repetition. He keeps brushing up against the same realizations, onto be lied to or misdirected and find himself back where he started. Too much of this sort of thing and even patient viewers throw their hands up and moan, “Oh, come on.” 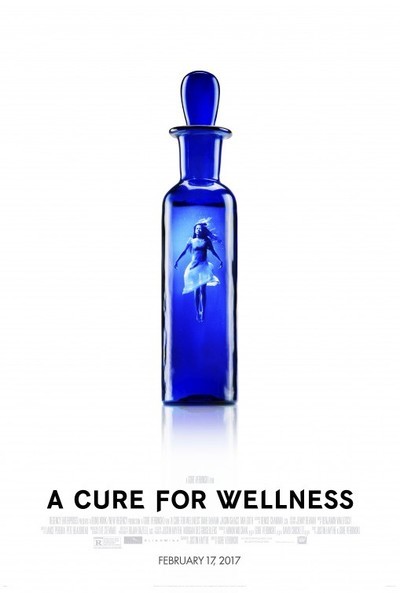