A Coffee in Berlin

There's a sharp commentary at the heart of writer-director Jan Ole Gerster's debut feature, "A Coffee in Berlin" (originally titled "Oh Boy"), which swept up many of the major German film awards last year. It tells the story of Niko (Tom Schilling), a twentysomething guy who has dropped out of law school, failed to inform his father of that fact, and yet still accepts the father's funding for the schooling that no longer exists. "A Coffee in Berlin" has some funny things to say about the "younger generation" and its prolonged adolescence, its putting-off of dealing with serious matters. With themes reminiscent of "Frances Ha," down to its being filmed in black-and-white, "A Coffee in Berlin" presents a day or so in the life of Niko, as he careens from one absurd interaction to another, clearly floundering, but still not seeing that it is up to him to create the life he wants. Not tomorrow, but right now.

What is truly delightful about the film is its loopy, gently slapstick sense of humor, its use of continuous running gags that pay off cumulatively (no small feat), and the dreamy sense that Schilling's somnambulism is pierced through only by the insane incomprehensible behavior of others. Schilling is a beautiful actor, accessible and vulnerable, and a veritable "Everyman" when compared to the kooks he encounters.

Just one example of many: Niko has moved into a new apartment, and his nosy upstairs neighbor (Justus von Dohnányi) shows up at the door with a bowl of his wife's meatballs. The scene seems at first that it will be a friendly meet-and-greet until the neighbor, a big bulky guy, suddenly begins to open up about his lonely life, and how he just wants to watch football in peace, and how his wife recently had a mastectomy (he sobs, "They took her whole rack!"), and it ends with the man crumpling down the wall, weeping, all as Niko looks on. They have known one another 10 minutes when this operatic moment occurs. The scene is horrible. The scene is hilarious. It takes a very deft hand to handle such material: to make it both awkward and comedic, inappropriate and true.

The film gains momentum as it goes along. There's a beautiful tension in every interaction. With each person Niko meets, you wait for the other shoe to drop. He runs into an old classmate named Julika (Friederike Kempter), who seems happy to see him and yet also reminds him that he called her "Roly Poly Julia" back in school; she was sent to a "boarding school for fat people" to recover. She invites him to attend a performance-art piece put on by her theatre group, which leads to one of the funniest sequences in a film full of funny sequences. Anyone who has ever sat through an overly-earnest performance art piece and yearned to laugh, or at least inject some irony into the proceedings, will relate.

There's even a movie-within-a-movie, as Niko and his friend Matze (Marc Hosemann) visit the set of a film being shot in Berlin so that Matze (an aspiring actor) can try to weasel his way into a part. One of Matze's friends plays the lead in the movie-within-a-movie, and it's the story of a romance between an SS officer and a Jewish woman. The friend, in his SS uniform, tells Niko and Matze the plot and gets so worked up by his fictional character's dilemma that he wells up with tears, all as his listeners squirm with embarrassment. Extras mill around outside, some wearing yellow stars and some wearing Swastikas, smoking cigarettes and talking shop.

The score of "A Coffee in Berlin" (original music composed by Cherilyn MacNeil and The Major Minors) is soft and jazzy, light and flippant, creating a comedic mood even when the actual events seem bleak. Niko confesses early on that he often doesn't understand what other people are saying to him, that they speak the same language but somehow he's not getting the message. His openness to others, and then his gentle confusion as things go south (and they always do), is part of his isolation, and also why the film is so strangely and consistently funny. Cinematographer Philipp Kirsamer manages to fill the film with a bustling sense of the urban sprawl of Berlin, with Niko making his way through all of the busses and trains and subway stations, as well as a collage-impression of a city in flux, with vacant lots, graffiti, empty squares at dawn. It's all part of the larger world with which Niko cannot seem to connect.

Niko is thwarted throughout the film in his quest to get a cup of coffee. The coffee machine is broken, or the vending machine is out of order, or the urn is empty, or a simple cup of coffee costs over three Euros. As "A Coffee in Berlin" goes on, the lack of coffee becomes emblematic of the feeling that the world is somehow massed against him. His relationship with his dad is horrible, his finances have been cut off, Roly Poly Julia has some potential but maybe she is as nutty as everyone else, and Niko can't seem to get a foothold on meaning, relevance, or action. The continued running gag of no coffee gets an enormous emotional payoff in the film's contemplative final moment.

"A Coffee in Berlin" veers confidently from melancholy to absurdity and back, and then back again. It's amazing that it hangs together as well as it does. The film is both silly and profound, a rare combination. 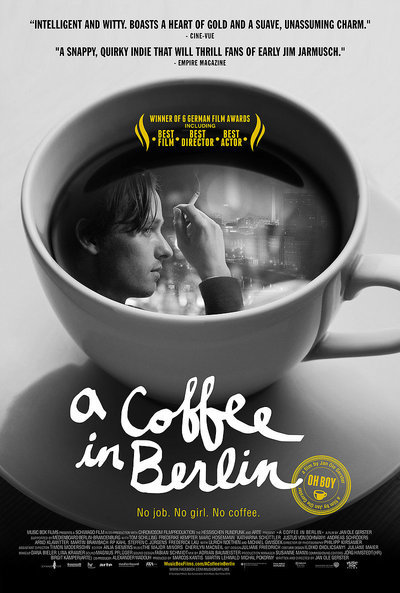