A Birder's Guide to Everything

Fifteen-year-old David Portnoy (Kodi Smit-McPhee, in a beautifully natural performance) is still grieving the loss of his mother when his dad (James LeGros) decides to re-marry. Even worse, Dad is going to marry the nurse (Daniela Lavender) who took care of his mom in her final months. David, a shy and emotional kid, has thrown himself into amateur bird-watching, following in the steps of his passionate dead mother, who we learn, later, was "one of the unsung heroes of birding". The under-seen 2011 film "The Big Year" was another story about the wonders of birding, its competitive nature, its obsessive cataloging of detail. "A Birder's Guide to Everything" uses birding as the launching point for a tender and gentle coming-of-age story, as well as a meditation on grief and letting go. It is also that very rare thing, a movie about teenagers where the characters actually seem like real teenagers, as opposed to mini posing adults. There's an innocence here, a real sweetness. Director Rob Meyer (the script was co-written by Meyer and Luke Matheny) finds the right tone early, sweet and almost sad, and, except for a few minor bumps along the way, doesn't falter with that tone. The coming-of-age clichés are certainly present here, but handled so sensitively that you don't mind it. The film cares about these characters.

David is part of a birding club at school, which consists of only three members: David, Peter (Michael Chen), who runs the meetings officiously, saying things like, "The Chair recognizes the Speaker…", and Timmy (Alex Wolff), who seems to operate under the mistaken impression that ornithology will make him a total chick magnet. Unfortunately, the only girl in the group quit, having grown tired of Timmy's "tufted tit-mouse" jokes. But all of the boys are serious birders. They are ambitious and they know their stuff. "A Birder's Guide to Everything" doesn't forget that teenagers are not just obsessed with sex and peer-popularity at school, although those "types" may dominate popular cinema. Nerds and geeks are usually the sidekicks in coming-of-age films, but here they take center stage. They are not handled patronizingly. Nobody is mocked for being smart, for having their nose in a book, for wanting to acquire knowledge.

One day, riding home from school, David catches sight of a strange-looking duck waddling across the road. He takes a blurred picture, and enlists the opinion of a famous local ornithologist, Lawrence Konrad (Ben Kingsley), who takes one look at the photo and thinks that David may very well have captured on film a duck thought to be extinct. Lawrence Konrad has devoted his life to birding, even lost a leg in the pursuit. He has written a memoir called "Look To the Skies", which young David has read five times. Konrad suggests to the excited boys that the bird's migration pattern means it may be in such-and-such a place the following weekend, if they wanted to try to track it. Naturally, that is also the weekend of David's dad's re-marriage. Things are tense at home. James LeGros plays the father as a well-meaning guy who has clearly been derailed by his wife's death in ways he cannot begin to understand. And his son's trauma is incomprehensible to him. Dad says at one point, "Everything happens for a reason," and then hastens to take the insensitive comment back when he sees his son's devastated face.

David and his friends decide to borrow the car of Timmy's cousin, even though none of them have their licenses yet, and take a road trip to find the bird. They need a better camera, though, and so Ellen ("The Bling Ring"'s Katie Chang) comes along for the ride, brandishing her telephoto lens. She's not a birder but she's got the best gear. She's new in town, her father being in the Air Force. A girl in their midst throws everyone off, in a way that feels sweet and right, as opposed to lascivious and leering. She is interested in learning about birding, and David points things out to her as they tramp through the woods, her face agog as she stares up into the trees.

A birder's course is never smooth, and there are other competitive birders who get wind that the awkward teens may be on to a big discovery. Lawrence Konrad himself may not be above a little treachery. Kingsley plays the role with a twinkling gusto: he is an intellectual and tough-minded man, who also represents a father figure to David: Konrad knew David's mother well, he respected her achievements. David feels like his mother is being erased by his Dad's re-marriage and the callous giving away of her possessions. He doesn't want his mother to be erased. He wonders if he will ever recover.

Moments of humor are sprinkled throughout, and while some of the jokes miss the mark (a whole bit about drugs in the car falls flat), the film flows on in its gentle way to the next moment. Nothing is derailed. The boys, in trying to hide their plans from the other birders encroaching on their quest, speak in stilted high school Spanish, the subtitles informing us that Peter is saying, "I will deceive them with agreement." As the kids lie in their sleeping bags around the campfire, one of them says, lazily, "Ever wish the earth was more like Middle Earth?" There is a pause, and one of the other other kids replies, "All the time." In a scene around the campfire, the four kids admit, one by one, that none of them has ever kissed anyone. Well, Ellen kissed one boy at a party once, but that's it. Meyer handles this scene delicately, soft-pedaling the sentimentality, and creating a small intimate breathing space where another type of teen can exist on the screen. It's refreshing.

At one point, David describes to Ellen the different kinds of birders, broken down by Konrad in his memoir: There are "feeders" and "listers" and, the highest level, "watchers". Watchers are the ones who actually learn how to see, whose obsession drives them into transcendent layers of sight, where the delineation between the bird and the watcher becomes irrelevant. It is a place of one-ness with your passion, with nature. Konrad admitted in his memoir that he was a "lister" who "strives to be a watcher". David's memories of his mother are already fading. He thinks he will never get over the loss. His dad doesn't get it. His friends are kind, but they don't get it either. David is a also "lister" striving to be "watcher". Watching will include not only the birds through his binoculars, but his father, his lost mother, his new stepmom, his friends, himself. 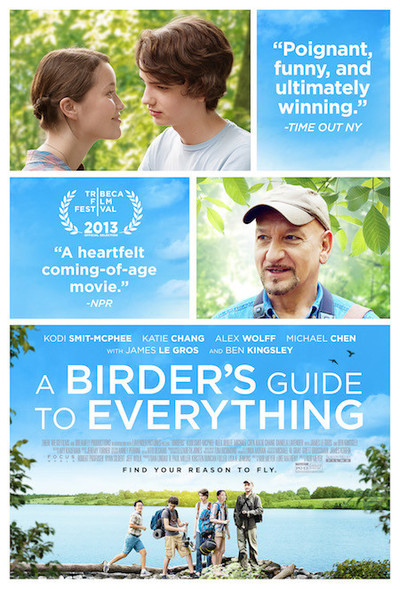