"This is the Ramones, but two years earlier." — Questlove of The Roots on Death

In the 1970s, three teenage brothers, David, Dannis and Bobby Hackney, formed a rock 'n roll band called Death. They grew up in Detroit, with loving supportive parents who gave them only one credo: "Back up your brother." Death never got very far, and their story is a fascinating one, told beautifully by Jeff Howlett and Mark Christopher Covino in their new music documentary "A Band Called Death."

David, the visionary, who came up with the band's controversial name, died of lung cancer in 2000. F. Scott Fitzgerald may have been right: there may be no "second acts in American lives," but "A Band Called Death" is a portrait of the good fortune and recognition that can come your way if you just stick around long enough. But it also delves movingly into the bittersweet feelings that come from being a pioneer, someone who is right before it is time. It tells what it's like to withstand a decade of professional rejection, followed by two decades of total silence, and what it's like to endure unimaginable loss.

The brothers loved all kinds of music growing up (their father made them watch The Beatles on "The Ed Sullivan Show," and each brother said they picked the instruments they wanted to play as they watched that historic broadcast). It was after The Who played Detroit that it became clear to them the sort of band they wanted to be. They loved Alice Cooper and Queen. Death's stuff was loud, fast, and powerful. David's lyrics were evocative, political, and eerily prophetic. But in Motown-dominated Detroit, three African-American brothers playing screaming rock 'n roll (or, as their brother Earl, laughingly called it, "white boy music") was against the grain in every which way. "We were the loudest thing they'd ever seen," says Bobby. Nobody quite knew what to do with them. Radio stations hesitated to play their songs. David was okay with that, saying to his brothers, "Pure rock 'n roll is what they don't play on the radio." This was before the Sex Pistols. This was before punk rock. As Mike Rubin wrote in his 2009 New York Times article about the unknown band from 35 years ago, "Death was punk before punk was punk."

There was also the little problem of the name of the band, a huge turnoff to record executives, producers, and pretty much everyone else. Arista Records offered them a deal, but only if they changed the name. David turned Arista down. Bobby and Dannis were furious; they both were willing to change the name, but David refused, and that was pretty much the end of Death.

The rejection got to Bobby and Dannis: they were rejected for the name of the band, rejected for the fact that they were black boys playing "white boy music", rejected for the sound of the music itself which didn't "fit" at the time. For 35 years, the master tapes made by United Sound (the Detroit studio which recorded them) sat in an attic collecting dust. Bobby and Dannis moved to Burlington, Vermont, forming a reggae band which had some success, and David stayed in Detroit, writing songs, and drinking too much. One of his brothers says, "He was one of those genius types. The demons get to you." Langston Hughes' poem comes to mind:

What happens to a dream deferred?

Or does it explode?

"A Band Called Death" is a story of the burgeoning punk rock scene, of the exploding DIY energy in the 1970s, but it is also a sweet and touching family story. The filmmakers keep it simple, using floating black-and-white photos of the brothers jamming with their instruments, or, hauntingly, walking through a covered bridge in Vermont. Home movies of the boys playing in an upstairs room at their parents' house shiver with the excitement of their raw energy and self-belief.

Dannis and Bobby are our guides through this history, and what beautiful and powerful interview subjects they make. Their emotions are on the surface, they go from roaring laughter to welling tears in a heartbeat. They tell the story without any bitterness, although there had to be so much bitterness along the way. They miss their brother, whose dream was so long deferred. They wish he had been alive to see everything unfold.

Bobby and Dannis travel with the filmmakers back to Detroit, to walk around their old stomping grounds. There are the obligatory mournful shots of the now-decimated Motor City. They stand in an abandoned building, which used to be the recording studio, and tell us what used to be there. Ghosts are all around.

The final third of the film moves us into another realm, the realm of obsessive music collectors, music bloggers, and punk rock fans, who tracked down two of Death's self-released singles on 45s and posted them on the Internet as mp3s. Mickey Leigh, Joey Ramone's brother, describes being awe-struck by what he heard. He couldn't believe that there was a punk rock band out there that he had never even heard of. How was that even possible? Kid Rock, Henry Rollins, Alice Cooper (and, oddly, Elijah Wood, who is listed as the "CEO of Simian Records"), all of them talk about their discovery of Death, and what an exciting moment it was.

The next generation of Hackneys are also musicians, and as it slowly became apparent to these young men that their fathers and uncles had been bad-ass punk rock musicians before they were even born, they put together a band called Rough Francis (one of David Hackney's songwriter pseudonyms), and began touring, playing Death songs. The millennial Hackneys are all interviewed as well, and the echo of the family credo "Back up your brother" begins to reverberate through the film in a whole new way. With all of its sadness and its sense of loss, "A Band Called Death" is a vibrant celebration of family.

In 2000, at a family wedding, David (who would die later that year) gave the master tapes of the Death songs to his brother, saying, "Keep these safe. One day the world is gonna come looking for this music." 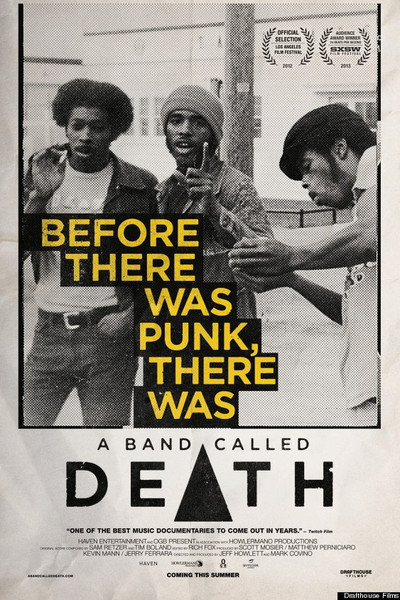 Bobby Hackney as Himself

Dannis Hackney as Himself

David Hackney as Himself

Henry Rollins as Himself