Through zero visibility, a group of American soldiers advance at a deliberate pace, over a barren dirt field hugged by a claustrophobic fog. A tight-knit bunch, one soldier sarcastically wonders how the point man can see anything. As the words leave his mouth, a machine gun’s mouth opens to fire in kind. Its bullets shred the breathable air. And the soldiers drop their bodies to hug the ground closer than the surrounding mist.

This is July 1943, in Sicily, during World War II. The men are part of a diverse unit from Oklahoma—known as the Thunderbirds—composed of Mexican Americans, Native Americans, and cowboys. The unit is at the beginning of a brutal 500-day trek through Nazi-occupied Europe. A gruff narrator makes clear “This is their story.” And yet it isn’t. Jeb Stuart’s animated Netflix series “The Liberator” promises "'Band of Brothers' but animated" yet beyond its intriguing concept is really more of the same: A narrative about a white male officer.

Based on Alex Kershaw’s non-fiction novel of the same name, Stuart’s brisk, action-packed miniseries begins during the unit’s early basic training days. Lt. Sparks (Bradley James) arrives at Fort Sill only to be bequeathed a group of men known more for scrapping with officers and failing their live-fire tests than for being a well-oiled machine. His superiors give Sparks one week to shape up these ragtag soldiers and he does so through basic human decency. See, in Oklahoma, much like the South for blacks, Mexican Americans and Native Americans are barred from bars used by whites. Even their drill instructor refers to these Native American servicemen as “prairie n*ggers.” Some soldiers have also faced problems with advancement. For instance, the Native American soldier Coldfoot (Martin Sensmeier) has been passed over for sergeant three times, and remains a private even after being in the army for three years.

Knowing these hardships, Sparks, who sticks up for the men against their racist superiors, reshapes these wayward soldiers under his calming, empathetic leadership. It’s a great start that isn’t further developed. While “Band of Brothers” followed Easy Company for a considerable amount of time so that we might learn more about the individual men, Stuart only offers us Cliff Notes about the Native and Mexican Americans, and the hardships they endured prior to Sparks arriving. To the show's detriment, Stuart, whose past writing credits range in quality from “The Fugitive” to “Fire Down Below,” hastily narrows his scope from this diverse unit solely to Sparks. Any character except for Sparks becomes unrecognizable.

It’s through the eyes of this lieutenant—a courageous leader who carries guns whose handles bear the images of his dear wife Mary—that we see the decimated European landscape. And yet even he’s frustratingly rendered. If one researches pictures of the real-life Sparks, the animated square-jaw blonde character shares only a passing resemblance to the rounder-faced future General. It’s a choice that says much about the aesthetic value system we want our heroes rendered into, which causes one to wonder why a real-life American hero’s appearance needed to look more like the actor playing him, when in animation, it can easily look like him. In fact, appearances are a glaring issue for the series. Barring very few exceptions, the height and build of the soldiers in the Thunderbird unit are uniform. While one or two brandish a distinguishing facial mark—Corporal Gomez (Jose Miguel Vasquez) has a scar across his right eye—the individual servicemen are indistinguishable. It's a shame, because the grainy animation itself is crafted to engrossing detail.

For battle scenes, which include famous World War II locations like Anzio, Stuart utilizes overhead shots to inform the scale of the battlefields. And Stuart doesn’t shrink from violence. “The Liberator” is a loud, explosive, bloody series, one that crystallizes the war’s brutality. Sometimes the shots repeat too often, especially the bird’s-eye view, making the conflicts look redundant. It's an unfortunate result, considering that choosing animation over live-action should allow greater freedom to craft unique shots and angles. Even with the ubiquity of the conflicts, they are engaging nonetheless, and a highlight of this character-driven war series.

Conversely, the Nazis offer little impact as enemies. With one exception, “The Liberator” spends much of its time trying to prove German soldiers weren’t so bad after all. Carving nuance into foes is a salient point to make, but “The Liberator” does so with the oddest of examples. In one scene, rather than choosing to shoot an uncovered Sparks running through the forest, three German soldiers allow him to leave, out of the goodness of their hearts. These soldiers are SS Storm troopers, considered the most fanatic of Nazis, and the biggest perpetrators of the war’s gravest crimes.

It’s even stranger because “The Liberator” ultimately builds to the liberation of Dachau. In fact, when the Thunderbirds arrive at Dachau, Stuart does not withhold the torturous landscape, but he does narrow his scope from the Jewish victims to rendering a historical and controversial execution carried out by American hands. There should be room to paint a full picture of both Jewish freedom, and how even saviors might be flawed, but this is a show of broad strokes, in a very limited time. While “The Liberator” is adapted from real-life events, the events Stuart chose to recount are unreasonably slight when considering the representational storyline the show promises. On all accounts, “The Liberator” is a missed opportunity. 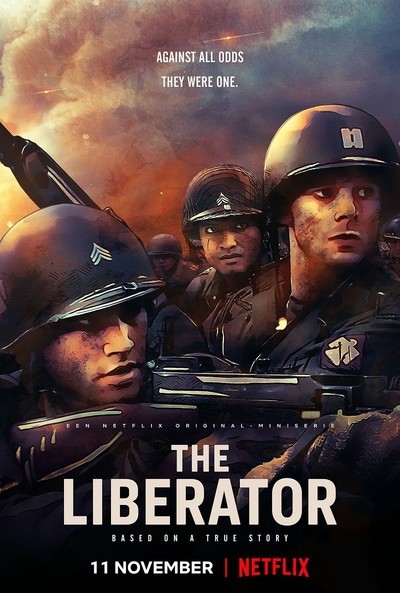