Ramin Bahrani makes films about the American Dream as seen through the eyes of those on the margins of the increasingly unrealistic "mainstream" life: immigrants, children, transplants, or those too damaged to participate anymore (like the grizzled old dude played by Red West in "Goodbye Solo"). For the most part, these people still believe in the American Dream. They hope, strive, plan. But the system has failed them. The system is broken, and never more broken than in Bahrani's latest film, "99 Homes," starring Michael Shannon, Andrew Garfield and Laura Dern.

"Don't get emotional about real estate," warns real estate broker Rick Carver (Shannon) throughout "99 Homes," as people are forcibly evicted after defaulting on bank payments. Carver's may be practical advice, considering the economic crash and the housing crisis, but it is also heartless. Real estate to Rick Carver means money and opportunity; real estate to everyone else means "home," and what is more emotional to human beings than the concept of "home"?

The film opens with a brutal eviction sequence, filmed in one take. Blood spatters the bathroom walls as the resident commits suicide, all as the sheriff's department swoops through the house, overseen by Rick Carver, a shark-eyed man in an ill-fitting blue suit, smoking a glowing-blue electric cigarette. The story shifts to Dennis Nash (Andrew Garfield), a single dad living with his mother (Laura Dern) and his little boy Connor (Noah Lomax) in the family home. Mom works a hairdressing business out of the living room. Dennis works construction but jobs are hard to come by. Nobody's building anymore. Bills pile up. They are in danger of losing their home. Dennis goes to court to fight for more time, he tries to get a lawyer to work pro bono.

One day, the reckoning arrives. The sheriff's department shows up, led by Rick, to evict them. In a harrowing scene of mounting panic, Dennis and his mother protest as Rick drawls, both easily and with enormous aggression, "This isn't your house anymore, son." The fight that ensues is acted and filmed with almost unbearable immediacy (cinematographer Bobby Bukowski does superb work throughout). Given two minutes to vacate, the hyperventilating family pile up whatever possessions they can fit into the back of a pick-up truck, and head to a cheap motel, filled with people in the same situation. "We've been here two years now," says a woman.

Dennis will do what it takes to get his home back, including accepting a job working construction for his nemesis Rick. It's a deal with the devil, and all that that implies. Dennis gets sucked into Carver's circle of easy cash, shady deals. Within almost no time, Dennis is on the other side of those evictions, standing in the doorway, waiting for the confused angry residents to vacate. The door-to-door sequences are masterful. These people don't seem to be professional actors (although they may be), their reactions are so raw and real. The audience is placed in the uncomfortable position of voyeurs, eavesdroppers, on a human being's lowest moment.

"99 Homes" operates like a thriller (from its stunning opening one-take sequence), with elements of melodrama to heighten the stakes. (Some of the melodramatic elements don't work as well as the rest, relying, as they do, on coincidence, racing against the clock, etc; the reality is horrifying enough.) Held together with Antony Partos and Matteo Zingales' portentous original score, thrumming underneath almost every scene, "99 Homes" represents a shift for Bahrani. His other features have been small dramas, filmed accordingly: lots of hand-held camera work and a naturalistic approach. "99 Homes" has a strong look, a bold mood, with attention-getting shots like that opener, as well as a couple of aerial shots showing homes stretched out below. From that vantage point, homes look generic. To those on the ground, of course, it's a very different story.

Andrew Garfield, as a man who has "failed" in his duty as protector and provider, has an almost constant sense of panic throughout, catching his breath in his throat, his posture tight and alert. Tears threaten to overwhelm him, but Dennis does not have time for self-pity. Nobody does. His one goal is to get his house back, the crevasse of permanent instability opening beneath him and his family. Bahrani keeps that heat turned up in the machinations of the plot, as Carver seduces Dennis with offers of wealth (meaning, in Carver's world, self-respect). "America doesn't bail out losers," Carver tells Nash. "America bails out winners."

Michael Shannon is both ruthless and strangely tender in his seemingly irredeemable character. Carver explains his background to Dennis, his humble roots, his roofer father, his jobs in construction. Up until the crash, his job was putting people into homes. It's not his fault that his job has now become throwing people out. Any hard economic time will create a man like Rick Carver, determined to make more money off the slump than the boom. It's a very honest performance.

Reminiscent of the films of Jafar Panahi (which also focus on those on the margins), Bahrani's films are a critique of the very concept of "mainstream." If there is to be a mainstream, then the boundaries must be more inclusive. Bahrani's films represent an urgent demand that audiences pay attention to the world and the people around them. His films insist: Look. See. Bahrani accomplishes this not by making "message" films, but by focusing on individual characters, whether it be a Pakistani former singer who now pushes a food cart in Manhattan ("Man Push Cart,") a little Latino boy working in an auto-body shop ("Chop Shop,") or the optimistic Senegalese-American who drives a cab and dreams of being a flight attendant ("Goodbye Solo.") Through these characters, Bahrani critiques American life, its economics, its class divides, its assumptions and social strata. Like Panahi, he is a humanist. The dignity of the individual is all.

"99 Homes" is a ferocious excavation of the meaning of home, the desperation attached to real estate, the pride of ownership and the stability of belonging. The pace never lets up. Once a person slips below the mainstream, it is nearly impossible to gain a foothold again. These characters struggle like hell to survive. 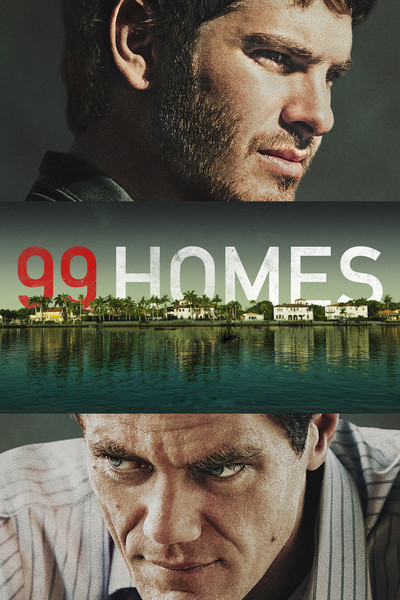 Rated R for language including some sexual references, and a brief violent image