The low-key screwball tone of Roshan Sethi's “7 Days” is a good reminder that characters don’t have to like each other a whole lot for their actors to have great chemistry. Take the high-strung Ravi (Karan Soni) and the unamused Rita (Geraldine Viswanathan), two Indian-American twentysomethings in the arranged marriage dating world, who are stuck together when the shelter-in-place takes effect right in the middle of their awkward first date. First, it was bad enough that Ravi took Rita to a reservoir with no water, and even drier conversation. Now he can’t leave her cluttered apartment place. He has to sleep on her couch, and uncovers more of the anti-traditional lifestyle that wasn't in her profile (she eats meat, drinks beer, and casually leaves her vibrator on her bathroom sink). Right when he realizes that no way could this woman be his future wife, he’s more or less trapped with her. It’s a clever premise, and this movie spins some sweet comedy out of it.

It's a gift when both actors in a two-hander like this are so much fun to watch, on their own or in shared scenes. Viswanathan has great comedic energy in the role, in that she’s so laid back but doesn’t miss a sharp one-liner in her banter with the far more intense Ravi. When Ravi tries to sound authoritative in her house, Rita can shut it down in a millisecond; the same happens when he tries to contextualize a good cuddle with why he wants to get married. “You don’t need to be married to cuddle with someone,” she says, gaining our affection with each dose of reality she delivers.

The movie is also a showcase for Soni, who co-wrote the film with director Sethi. He is funny, gentle, soft-spoken, and endearing throughout, earnestly making jokes about his character's neuroses or traditional fixations, while depicting how someone can be open to new experiences and perspectives. Part of his arc comes from seeing things more her way—he wears her sweatpants and lazy shirts through his stay, in a funny metaphor.

“7 Days” has an overall sweetness that keeps it charismatic for its 85-minute runtime, with an agile directorial eye that makes sure the back-and-forth scenes of them talking have enough life in them. (The constant California daylight pouring into Rita's apartment doesn't hurt either.) And there’s something to the plotting as well, constantly making you wonder how the story will overcome its next problem. At first it’s that they are too opposite to like each other, so how will the script, if it wants to, take us there? And then what happens when Ravi has to go on other virtual dates while at Rita’s? A few more surprising conflicts enter into the mix, while the story nonetheless stays true to its main on-screen casting of only two leads. It’s impressive, especially as it's easy for a similarly minimal production to run out of ideas.

The movie is bookended by Zoom testimonials from real-life married Indian couples who met through arranged marriages, and have very sweet words to share about their partners, and the way they got together. In this movie’s earnest way, it wants to make a case for the process of getting to know someone in a more direct fashion, like how Ravi is trying to do. I wanted more from this advocacy, but “7 Days” does a heartfelt job in showing with its documentary portions that it can work, and with its narrative focus how it might work.

Not for nothing, “7 Days” joins the limited ranks of Good Covid-Era Cinema, and applies certain anxieties about the period of shelter-in-place creatively, without manipulation. That is no small feat; neither is making some movie magic out of two actors dancing around the question that, when just elusive enough, always makes for a good story: Will they or won’t they? 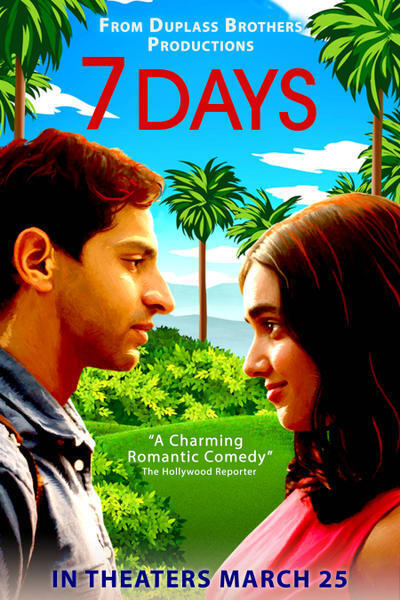