Everything has a price in Juan Carlos Maneglia and Tana Schémbori's "7 Boxes". You want something? You better have something to trade, be it information, money (hard to come by), or one of those nifty new cell phones with a video camera. "7 Boxes" takes place in a 48-hour period within the sprawling Byzantine maze of a Paraguayan market. Everyone knows everyone. It is 2005. Cell phones are still a novelty, let alone ones that can take pictures and videos. You could do anything if you had one. They are currency. Currency, and what it means in different situations, is the underlying theme of "7 Boxes", its urgent motor. The brutality of capitalism is not critiqued by any of the characters because they are too concerned with survival to worry themselves over concepts, but the implications are clear. You can't get anything in this world, drugs for your sick child, a girlfriend, a cell phone, without currency.

Victor (Celso Franco) is a kid who works as a delivery boy in the market. He has a rickety wheelbarrow and he hustles customers to let him carry their goods. Victor is young and wily. He's also captivated by anything that has a screen: security cameras, used televisions, his friend Liz's cell phone with a video. He wants one. He has no money. So when he is suddenly offered a weird gig by a sleazy butcher to transport seven boxes with contents unknown away from the butcher's shop (surrounded by cops), he jumps at the chance. Unbeknownst to Victor, another guy named Nelson (Víctor Sosa) was supposed to get that delivery job, only he was late for the pick-up. Nelson, a desperate man with a sick son, sets out to find Victor and steal the seven boxes so he can collect the payment which he sees as rightfully his.

There's nothing like a strong set-up, and the set-up in "7 Boxes" is powerful, simple and dramatic. What is in the boxes? Why are they so important? Cops prowl through the market, but they are as corrupt and on-the-make as everyone else. Everyone can be bribed. Cell phones are passed around, from pocket to pocket, and, in one funny scene, a cell phone is stolen, and Victor, thinking he's calling the butcher, gets the thief instead. "Can I speak to Mr. Dario?" "This is my phone now. I'm the thief who stole his phone." "Oh, okay. Bye."

Victor has a sister (Nelly Davalos), who works in the kitchen of a Korean restaurant, and a friend named Liz (Lali Gonzalez), who tags along with him, but other than that his whole world is his wheelbarrow and the market, as well as the pull of any television screen in his vicinity. No matter how tense the moment is, Victor stops in his tracks to stare at the images, commercials, American movies dubbed in Spanish, and even himself on security-camera footage. What is it he sees? Escape? Wealth? Fame? Whatever it is, it represents the irresistible allure of a life where currency is available, up for grabs, where there's more than enough money to go around. Victor has no resentment about his poverty. He is too busy trying to survive being chased by Nelson and by the cops. But he is pulled up and out of himself, through the technology proliferating around him in endless screens.

As it becomes clear to him that the seven boxes are bad news, and that he is in serious trouble, he hides the boxes. That doesn't work out well. Liz steals the boxes, to help him out, and then he steals them back. Meanwhile, Nelson has gathered together a gang of desperate people willing to help track down Victor in order to get a piece of Nelson's payment. The chase takes them through the market, its random dance clubs, and lunch counters, its back alleys, and warehouse spaces. Some of these scenes, crowded, busy, frenetic, are reminiscent of some of Jafar Panahi's films, with their use of actors who don't seem like actors at all racing through real-life urban settings.

Victor is on the run, but he has nowhere to go. He never leaves the market. But as the competing circles close in on him, as the seven terrible boxes loom in portent, he and his friend Liz huddle against an iron gate, hiding, and suddenly, impulsively, he leans in and kisses her. He obviously had wanted to kiss her for a while. Their relationship is the teasing annoyed banter that screams romantic tension. But perhaps he saw a movie star kiss a girl like that once, and perhaps it gave him courage, it showed him how.

"7 Boxes" is both a tense and frightening crime film as well as a sometimes-dreamy evocation of life in the sprawling underclass, its hallucinatory aspects, its chaos and violence, its fantasies. 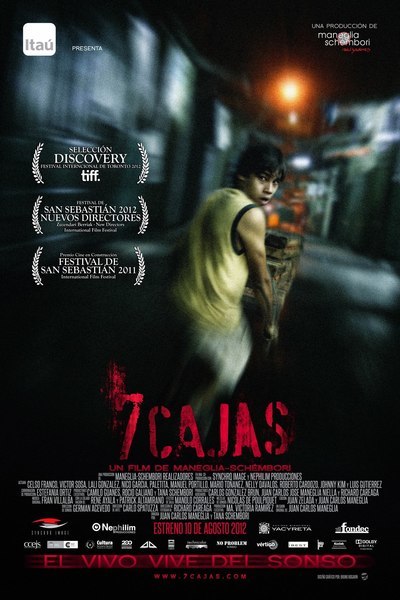