“68 Kill,” Trent Haaga’s adaptation of Bryan Smith’s novel of the same name, starts with a propulsive, grungy energy that works for about a half an hour. It’s the story of a young man caught up in the allure of every beautiful woman he encounters, even if they’re homicidal maniacs. It opens with a shot of a fly stuck in honey. Clearly, our male lead is the doomed bug, and the honey is, well, you get it. At its best, it recalls the “cast of crooks, most of them morons” aesthetic of writers like Elmore Leonard or Carl Hiaasen, and it often has the energy of the late-‘90s crime movies that sprung up in the massive wake of “Pulp Fiction.” The film’s biggest problem is that its greatest asset disappears for way too long and her absence allows one to notice the thin characters and lack of witty dialogue. This is the kind of piece that needs to move 100MPH from first scene to last for you to overlook its flaws. It slows down for too long to recommend the ride.

Matthew Gray Gubler is effective as Chip, the kind of naïve, All-American kid who too easily trusts people and rarely considers the outcome of his actions. He literally shovels shit for a living as a sewer worker, and his girlfriend Liza (AnnaLynne McCord) was a former stripper and hooker who’s tired of having to bang her landlord when she can’t pay rent. When she discovers that said landlord has $68,000 in a safe, she convinces Chip to help her steal it. Things go very wrong for Chip and Liza, and they’re soon on the run with a witness named Violet (Alisha Boe) in the trunk. However, Liza has no qualms about doing what needs to be done with the pretty girl—she’s going to sell her to her brother, a man who tortures women for sexual pleasure. Yes, it’s that kind of dark movie. Pitch black. And it’s as if Chip is seeing the danger and moral depravity of the world for the first time. He’s got to get away from Liza. Now.

McCord is easily the best thing about “68 Kill,” finding the balance between a traditional femme fatale and something more akin to “American Psycho.” She captures a woman who knows how to use her beauty to her advantage, but is sick and tired of having to do so. She’ll take what she thinks she deserves however she can possibly can, whether it’s sleeping someone like Chip or cutting someone’s throat who crosses her. She’s not so much a sociopath as someone who has simply stopped caring about the alleged order of a world that has given her nothing; so now she takes. McCord makes smarter decisions here than most other actresses would.

The problem is that the movie sidelines her in ways I won’t spoil, and we’re stuck with Gubler and Boe, particularly grating as they get into a potential love subplot. The movie feels like a writing struggling to figure out where to take his characters in an extended midsection at a motel and then again in a dark final act in which Chip crosses paths with another crazy killer woman (Sheila Vand of “A Girl Walks Home at Night”). It’s here when you notice that Haaga doesn’t quite have the visual language as a director to make this as gritty and intense as it should have been—the stakes don’t feel real even as bodies are being mutilated—and he doesn’t have the ear for dialogue as a writer to make the characters feel like more than devices. “68 Kill” can’t quite sustain its short running time, lacking enough character or plot to keep its cinematic engine moving, especially after it loses its turbo drive of a leading lady. 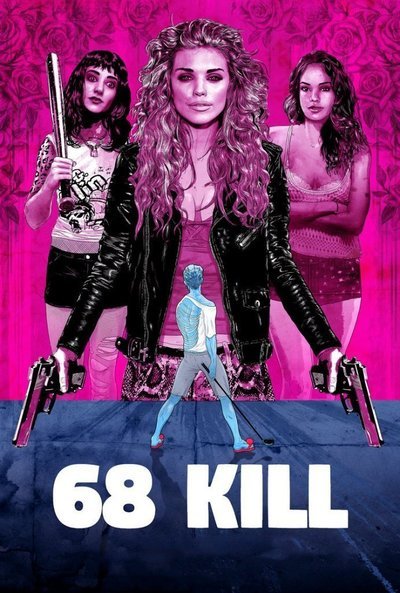