Spectacular goofiness should be expected of "47 Ronin," an American film loosely based on the true story of 47 real-life master-less samurai who avenged their disgraced master's death. As its ads promise, the film features a troll-looking dude with a mace, a giant in a samurai suit of armor, Keanu Reeves with a sword, a tattooed dude with two guns, a sexy lady who floats around in a sentient Snuggy/kimono, and a pissed-off fire-breathing dragon who kinda looks like "The Never-Ending Story"'s Falkor. But in spite of its enjoyable, easy-to-exploit aspects, "47 Ronin" is a big budget spectacle hamstrung by its need to be at once flippant and respectful of its honor-driven source material.

In this version of the popular story, 47 samurai seek revenge after Lord Asano (Min Tanaka) is disgraced by a young Lord Akira (Tadanobu Asano). The insult in question is not insufficient tribute/bribery, as in other versions of the story. This time, Akira sets up Asano for accidentally disrespecting a fighting tournament's #1 rule: only samurai can participate.

After Akira poisons Asano's fighter with magic, half-man/half-demon Kai (Reeves) tries to save Asano's face by fighting on his behalf. But Kai is only a "half-breed," as he's repeatedly called, and not a real samurai, and is inevitably caught. The Shogun—"the lord of all Japan," as he's described baldly in an especially tedious bit of exposition—is lenient, so Asano is sentenced to commit seppuku rather than hang "like a common criminal."

So in this version of the tale, Asano's suicide is not a voluntary act, but a capricious punishment. The ronin's revenge is therefore only ostensibly about upholding the bushido code, as the Shogun says: it's really about giving as good as they've gotten. This isn't a major misinterpretation of the story, but it does suggest that the film's creators didn't know how to dramatize either the impersonal reasons for Asano's death or his samurai's subsequent actions.

But what's really troubling about "47 Ronin" is its creators's refusal to let it all hang out. In theory, they've included a lot of fun, over-the-top fantasy elements.The film's plot is a sub-"Lord of the Rings" fantasy about a group of stout-hearted men whose bro-manity is tested by assorted monsters. You will see a witch (Rinko Kikuchi) with Medusa-like hair coyly seduce and try to force-feed (with her hair!) Mika (Ko Shibasaki), daughter of Asano and and lover of Kai. You will also see a baddie credited as "Lovecraftian samurai," and Reeves fighting back a blast of dragon-fire with an enchanted sword, and bird-men/monks attacking samurai in a forest temple. This sort of thing should be fun. Somehow it's not.

The good/loopy generic stuff is supposed to establish the film's serious, parable-like themes, but "47 Ronin"'s creators seem to take the film's self-denying message too much to heart. The result ends up pitting the forces of uptight righteousness against a bunch of almost-attractive baddies, an uneven fight that says a lot about this confused and dreary "47 Ronin." Whatever its flaws as an interpretation of a legend, this movie still could have rallied to be stupid and awesome, but the filmmakers seem afraid to try. The gonzo sword-and-sorcery elements that should be the film's saving grace are invested with about as much detail as the tragic, tight-sphinctered, duty-centric stuff. Elements that should be flamboyant and fantastic are drained of exuberance. The action scenes are unimaginatively choreographed and shot, excessively edited, and often out-of-focus, and the script's fantasy elements are lazily strung together.  You will see this film on an airplane, and it will put you to sleep. 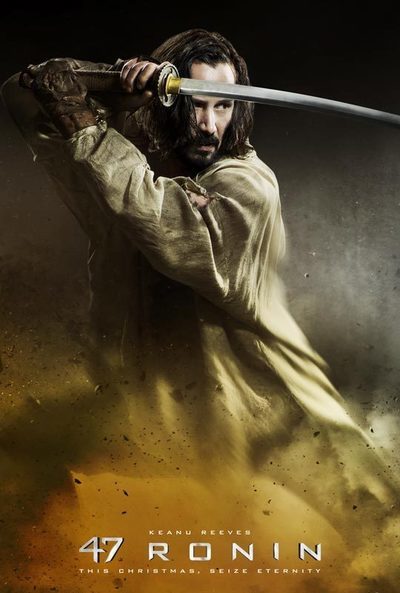