If you were offended by the supposedly profligate use of the n-word in “Django Unchained,” it stands to reason you’ll be outraged by a scene in “42” in which Philadelphia Phillies manager Ben Chapman climbs out of the dugout and spews cruel racist epithets at Brooklyn Dodgers rookie Jackie Robinson.

You can see the pain and rage on Robinson’s face as he tries to concentrate on his at-bat, knowing if he goes after Chapman, the headlines won’t be about the hateful manager — they’ll be about the first black player in the major leagues “attacking” the opposition.

It’s a tough scene to sit through, with the likable character actor Alan Tudyk bravely portraying this real-life embodiment of pure, ignorant, racist hate, and Chadwick Boseman doing equally fine work as a the fiery, intense Robinson, who must perform with the weight of instant history on his shoulders — while racists such as Chapman (and some of Jackie’s own teammates) are hectoring him every step of the way. (Sadly, the Chapman character wasn’t the least bit fictionalized. The ’47 incident really happened. Before that, as an All-Star outfielder with the Yankees, Chapman reportedly taunted Jewish fans with anti-Semitic slurs and the Nazi salute. What a guy.)

The sliding moral scale of major league baseball at the time was such that Brooklyn Dodgers manager Leo Durocher was suspended for an entire season for having an affair with a married actress — but Chapman was just told to knock it off with the racist taunts and to pose for a publicity photo with Robinson.

That this all happened in 1947 — history recent enough there are people around who remember it — might come as shocking news to younger generations who know little about Jackie Robinson other than that his number 42 being universally retired because he broke baseball’s shameful color barrier. For this reason alone, “42” is a valuable film — a long overdue, serious big-screen biopic about one of the most important American pioneers of the 20th century.

But this is more a ground-rule double than a grand slam.

As written and directed by Brian Helgeland, “42” is competent, occasionally rousing and historically respectful — but it rarely rises above standard, old-fashioned biography fare. It’s a mostly unexceptional film about an exceptional man.

Boseman is a fine actor, and he looks like a baseball player in the spring training and game-time sequences, but other than one bat-breaking meltdown that takes place out of sight of fans and teammates, we rarely get that visceral, punch-to-the-gut true feeling for the pressure Robinson surely must have felt when he took the field in 1947 as a pioneer. (As “42” reminds us, black Americans fought and died for their country in World War II — but they returned home to a country with separate drinking fountains and a ban on Negroes in the major leagues.)

To be sure, there are scenes of racist fans heckling Robinson and many of his own teammates signing a petition demanding Robinson not be allowed to join the Dodgers — but “42” falls short in giving us a full measure of the man himself. The Jackie Robinson of “42” is a high school history lesson, lacking in complexity and nuance. Even the domestic scenes with the beautiful Nicole Beharie as Rachel Robinson paint an almost too-perfect picture. The real Rachel Robinson was also a hero, but in “42,” she’s portrayed as a near-saint, patiently counseling Jackie to hold his temper, and looking like a movie star as she quietly endures the morons in the stands behind her.

We’re told Robinson was chosen over other major league-ready players (and future teammates) such as Roy Campanella and Don Newcombe because he wasn’t as “nice,” i.e., soft, and would be better equipped to deal with the hate and intolerance.

In “42,” Robinson is indeed pragmatic. When he gets the offer to sign with the Dodgers, he’s more excited about the pay increase than the historical implications.

Harrison Ford is all eyebrows and speeches as Branch Rickey, the Dodgers executive determined to break the color barrier. It’s a rather remarkable performance by Ford in that he goes for it whole hog, scowling and barking and delivering sound bite-sized life lessons. Whether Rickey’s lecturing young whippersnappers in his sun-dappled office (which looks like it was borrowed from “The Natural”) or observing his ballclub from the sidelines, he’s filled with one-liner wisdom and perfectly timed punch lines.

John C. McGinley delivers a gem of a performance as the great announcer Red Barber, and Andre Holland is solid as Wendell Smith, a black sportswriter who’s more of a baby-sitter and travel guide for Robinson than an objective journalist.

From the soundtrack to the speechifying to the subject material to the script’s somber tone, “42” has the uniform of an Oscar contender, but it falls short of Hall of Fame status. Jackie Robinson was great. “42” is good. 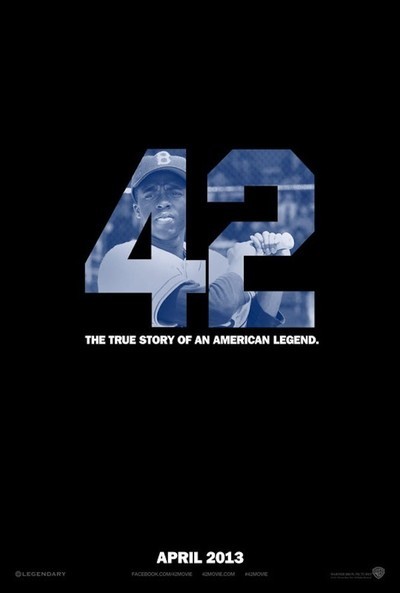