"31," a surprisingly effective new horror flick about a group of carnies who are kidnapped and hunted by murderous clowns, doesn't feel like business as usual for the writer/director Rob Zombie. Sure, you can find all the touchstones of Zombie's burgeoning filmography here, including foul-mouthed circus folk, surprisingly well-composed handheld digital photography, and a slew of character actors that only diehard horror nuts will recognize. And the run-and-kill, "Most Dangerous Game"-style plot is strictly boilerplate: foppish aristocrats abduct a group of carnies and bet on who will live and who will die.

But Zombie's characteristically infectious personality and abrasive style of filmmaking gives "31" an unusual urgency that pulls together otherwise familiar elements and makes them cohere into a dire polemic. Granted, Trump and Clinton supporters can just as easily see their respective opponents as the piece's real villains: some of the evil clowns identify themselves as Nazis and/or misogynists, and the aristocrats pulling their strings represent an established hierarchy of jaded kings and king-makers. But there's a hard, albeit idiosyncratically expressed, political core to the film that makes it a perfect election season horror film that forces a complaisant community of outsiders to fight for their lives.

What will you do, Zombie seems to ask: bow down to the rich demagogues who pit you against your fellow men? Or will you fight for yourself, and cut down the people who willingly accept dehumanizing roles?

There's no middle ground in "31," though the film's antagonists are eventually revealed to be just as human as Zombie's lead protagonists. As they chase each other, both groups—the good-natured carnies led by Charly (Sheri Moon Zombie) and the killer clowns headed by sadistic killer Doomhead (Richard Brake)—egg each other on as if they were sitting in a dunk tank, daring rubes to hit the target and send them reeling. But the main difference between the two groups is fairly simple: Charly's gang works together to survive while Doomhead's crew are tools of evil masters Father Doom (Malcolm McDowell) and Sister Serpent (Jane Carr).

Before they're kidnapped, Charly's people take joy in each other's company. They smoke pot, have (or joke about) sex with each other, and generally function as a unit. Doomhead's guys aren't nearly as conscious of each other. They boast about how much they hate what Charly's group symbolizes: an integrated group of white and black men and women who genuinely like spending time with each other. For this reason, Doomhead's group only really show their humanity when they're begging for their lives (more on this shortly). They are human, but they choose not to be, and that's why they deserve to die.

Here's where Zombie's jeremiad-like fervor gets a little hard to swallow: since his political arena boils down to taunts and violence, there's not a lot separating the baddies' actions to the good guys' responses. There is, therefore, a generic assumption of how murder works in "31:" we want the bad guys to die because they've picked the wrong side.

Still, villains beg for their lives, as I mentioned above, because there's something brutal and unsparing about Zombie's kill scenes. These sequences are shot with a frenetic shaky-cam style. But you can feel Zombie's adoration/fascination with his actor's body language and facial features even when they're at the point of dying. He uses leering medium and extreme close-ups to emphasize his actors' contorted grins/scowls, the bags under their eyes, and the ferocious will to live that transforms their faces into living masks. Zombie spends just as much time lingering on the toothy grin of Jeff Daniel Phillips, playing a white-hat-wearing horndog, as he does doting on Brake's hollowed-out stare. These aren't meat puppets: they're people with individual personalities, regardless of whether they choose to make the right choices or not.

That having been said: "31" is not so different from Zombie's earlier films, particularly the alienatingly rough-around-the-edges "House of 1000 Corpses," that it will somehow win over those who aren't already interested in his work. Zombie tends to throw stuff at the wall, and see what sticks. He's an intuitive filmmaker, and his style is loud and jarring. So I know you're probably already shaking your head at me by this point, but trust me, I get it: "31" is going to be a hard-sell for anyone but card-carrying Zombie-ites.

That being said, "31" feels like something new from Zombie. It feels like an adrenaline-high cry to action from an accomplished artist. Zombie may not be working outside of his comfort zone, but "31" is one of his most impressive films to date. 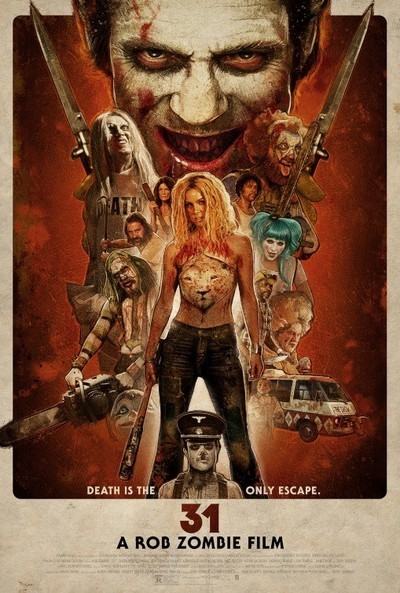