I should do a little more research, but I think "30 Minutes or Less" is the first R-rated slacker comedy based on a true recent story in which a man was blown up by a bomb strapped around his neck. You may recall the 2003 case of a pizza delivery man who dreamed up a scheme to rob a bank with a bomb strapped on him. He thought it was fake, but his treacherous partners double-crossed him.

Now here is a movie about a guy who drives for a Grand Rapids, Mich., pizzeria that promises your pizza in 30 minutes or less. That of course establishes him as a breakneck stunt driver, which will be useful in the inevitable chase scene. The driver, named Nick, is played by Jesse Eisenberg, in an unfortunate career move after "The Social Network." He was so good in that film that it is impossible to believe him as a character a dumb as Nick. For comparison, try to imagine George Clooney, Ben Kingsley and John Malkovich playing the Three Stooges.

His best buddy is Chet (Aziz Ansari), who goes ballistic when he discovers Nick has slept with his beautiful twin sister, Kate (Dilshad Vadsaria). That causes complications when Nick turns to Chet in desperation with a bomb strapped to his chest.

How did this happen? We meet two slacker layabouts, Dwayne (Danny McBride) and Travis (Nick Swardson). Hapless, luckless and witless, they make 10 bucks an hour cleaning the pool of Dwayne's father (Fred Ward).

One night during a lap dance, Dwayne mentions his dad is a lottery winner. Juicy (Bianca Kajlich), the dancer, then promises that Dwayne's lap need never be untenanted again if he steals a million from his dad. She even suggests a hit man from Detroit, Chango (Michael Pena).

Their brainstorm: Order a pizza, strap a bomb to the guy and have him rob a bank to get them the money to pay the hit man, who will then kill the lottery-winning dad. Need I explain that everyone involved in this plot is stupid enough to go along with it?

The time bomb deadline ramps up the urgency and leads to great desperation. The movie's strategic error is to set the deadline too far in the future. There is something annoying about a comedy where a guy is strapped to a bomb and nevertheless has time to spare for off-topic shouting matches with his best buddy. A buddy comedy loses some of its charm in a situation like that.

Certain moments in the film elicit mechanical laughs. The chase is well-staged, but then staging a good chase, in this era of CGI, is becoming routine. Eisenberg is a good actor, which may be why he's wrong for this dumb comedy. The tension over his buddy's sister feels contrived, and only one line is devoted to the intriguing implications that she's a twin sister.

Oh, and the only purpose of Kate is to be beautiful. She is plugged into the plot, used to establish her existence, and dropped. If she had been more involved, that might have been an improvement — or might have shown up the plot's shaky contrivance. Better to devote more screen time to the lap dancer, right? Moral of the story: If you occupy the demographic that this film is aimed at, Hollywood doesn't have a very high opinion of you. 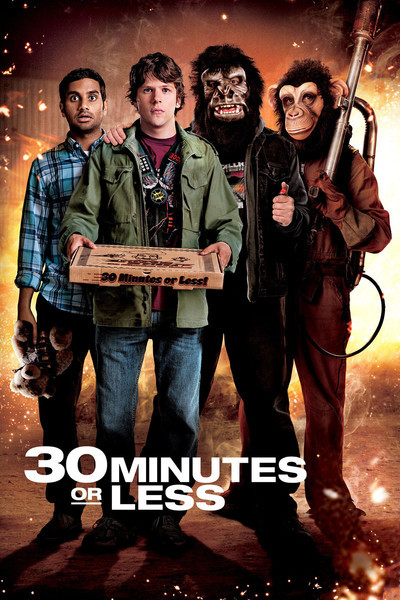 Rated R for crude and sexual content, pervasive language, nudity and some violence

Fred Ward as The Major