If you follow American independent film, you know Joe Swanberg's name, if only because it's impossible to escape. According to the Internet Movie Database, "24 Exposures" is his eighteenth feature since 2005; he has also directed short films and TV episodes and been a producer, actor and crew-member for other filmmakers. So when we talk about Swanberg, we're talking about a guy who adheres to Woody Allen's philosophy of the artist as pro ballplayer: the goal isn't to hit a home run every time you're at the plate, but to bat as many times as possible and keep your average up. Swanberg's average has improved over time—he's an intelligent and tireless filmmaker, and his recent features "All the Light in the Sky" and "Uncle Kent" and his segment of "V/H/S" were solid and occasionally inspired—but his latest, about a photographer who might be a killer, is wild pop fly that disappears in the stands.

The film's hero, Billy (filmmaker-actor Adam Wingard, who worked with Swanberg on "V/H/S"), has a day job snapping crime scene photos for the city's homicide squad. When he's off-duty, he lives his devoted girlfriend Alex (Caroline White) in a boho apartment whose guests tend to be women who are as young and stacked as Alex, and amenable to getting naked and taking part in threesomes.

Billy also takes disturbing art photos of women. Some he knows well, others he picks up. His subjects are half-naked and trussed up and horror-movie desecrated. There's a parallel story about one of Billy's colleagues, Det. Michael Bamfeaux (filmmaker-actor Simon Barrett), who's investigating a real murder and seemingly losing his grip on sanity. I say "seemingly" because, like Wingard, Barrett is a filmmaker-actor who doesn't have the technical skills or raw charisma to hold our attention in a slow, moody genre picture. (This is one of Swanberg's most debilitating faults as a director: his casting, particularly in small films, is chummy when it should be artistically ruthless.)

The film is a gloss on Michael Powell's "Peeping Tom," but with a sleazy, vaguely threatening atmosphere, indie film production values, and a synthesized score that evokes "Manhunter" and other '80s crime pictures. Its plot is a series of situations that become more disturbing when Billy's compartmentalized art encroaches on his home life. The hero describes his photos to Alex as part of an ongoing "fetish" project, but they're beyond fetishistic. In fact they provoke the spectator to wonder whether, even if Billy is not a killer, he's disturbed—otherwise why devote himself to "art" that depicts female bodies as meat? Alex wonders the same thing. So does a bar waitress (Helen Rogers, also of "V/H/S") whose black eye fascinates Billy to the point where he invites her to pose for him. When Billy says they're doing "dress-up mixed with fine art" she mockingly replies, "Fine art? Is that what we're doing here?" But she takes her clothes off anyway because Swanberg, like Russ Meyer before him, is a breast man.

"What am I looking at?" That's the most persistent question raised by "24 Exposures," and the director purposefully declines to answer it, presenting art and crime scene photos so that you can't immediately tell which is which. As in the European art films and American New Wave films that inspired it ("Blow-Up" is another touchstone), the difficulty of distinguishing the real from the reel is the point of this exercise. This is a meta movie. It's more about spectatorship and complicity than characters or situations.

"24 Exposures" becomes halfway intriguing if you think about it as an instance of a significant American filmmaker letting detractors provoke him into self-reflection. Swanberg has been criticized for putting extensive nudity, as well as explicit sex scenes that occasionally involve Joe Swanberg, in films that may not necessarily require them, and for objectifying actresses whose trust makes his art possible. "24 Exposures" doesn't rebut any of these charges, or try to, but it does take them into account. Billy (a character played by a director) might be a worst-case alter-ego for Swanberg. The character is a prolific producer of images who seems to have given no serious thought to what he puts into them, and his creativity is inextricably tied to the urge to make women take their clothes off.

Is Swanberg pre-empting complaints about his methods by making a film about an artist who is, if not a killer, then at least creepy and unreflective? Maybe, maybe not. But the question will only interest people who follow Swanberg's career. Everyone else will look at "24 Exposures" and see a meandering, indifferently acted thriller that's saying something, but not too clearly. 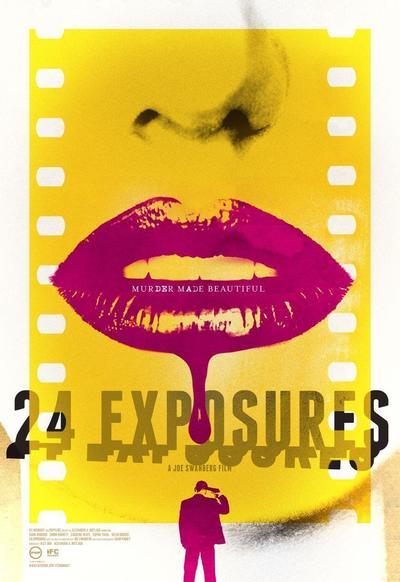