The most memorable facet of chintzy coincidence thriller “2:22” is its strange timing. It arrives to theaters and VOD the same day as a JAY-Z album that also favors numbers, 4:44. With time titles rarely making its way into any medium, what are the chances of two on the same day and for even numbers? Maybe it means something. Or, as with much of this overwrought movie, maybe it means very little at all.

Michiel Huisman plays an air traffic controller who notices the patterns in life, as stated by his clunky opening voiceover. It helps him do his job where he is able to see flight plans with a savant quality (or at least that’s how it’s presented), but it starts to pop up elsewhere in his life. When biking to Grand Central Station in the mornings, he notices different people doing the same thing in the same order—women laughing, a person saying “can I help you?”, a car horn, etc. City ambience or something else? Even stranger, he sees very similar patterns at Grand Central station—couples hugging, a pregnant woman, a group of school kids—and at the exact time of 2:22pm, some type of malfunction happens at the station, glass randomly shattering or light bulbs exploding above.

There’s an interesting point to explore in this concept about how things seem to run into pattern or repetition, but instead this movie is aimed towards a love story. There’s a meet-cute which is one for the books, in which he meets an art curator named Sarah (Teresa Palmer, in a definitively thankless role) whose plane he almost caused to hit another plane on the runway. In the eloquence of this unnatural script, the humdinger exchange goes: “I was on that flight.” “I nearly killed you.” “No, you saved me.” Later on, Sarah’s jealous artist boyfriend Jonas (Sam Reid) puts on a hologram display that shows the exact images Dylan has been seeing. Is Dylan going crazy? Is everything he’s seeing every day just a coincidence, a one in a billion chance? There are even more threads that are created, involving a murder that happened 30 years ago at Grand Central station. Director Paul Currie has a handsome look for the movie but does not have the vision to make all of these magic beans grow into one captivating entity.

Like "The Number 23" or "Knowing" before it, "2:22" breaks an unwritten rule about coincidences in movies, where if details in the script are made so obvious, of course patterns will arise. There is scant awe as the movie starts to create trends from what is going on, which feels like it’s more in service of screenwriters trying to pull off eight tricks at once. Halfway through “2:22” you’re watching it just to see if it will ultimately make sense. By the end it does, and for a wayward cheesy purpose that I will not spoil, but also cannot say I was that in the least amused by.

“2:22” does not make a compelling case for rising actor Huisman as a sturdy lead, despite being shown everything he can do, from working out in his apartment, biking through city streets, or furrowing his brow while picking up his keys. Like the other human beings in this movie, his character registers quickly as wooden, and isn’t able to change that fate. As strange things happen in the world it just comes off more like he’s posing than presenting a curious intellectual thought, and he isn’t given much of a sense of humor to add a few more dashes to charisma. But if you’re a “Game of Thrones” fan who wants to see Huisman play the sexiest air traffic controller alive, “2:22” has that.

The busy nature of the movie doesn’t make it work any better. There’s a whole first act about his work as an air traffic controller, complete with high-paced air traffic control work, that could largely be excised, even if it makes him look super cool and lets him say “punch it!” into a phone while in close-up. And as it builds up tension from close calls in other sequences, as when Dylan is driving in a cab and seemingly avoiding predestined accidents by milliseconds, the editing is too choppy to create tension.

At the very least, the movie seems to concede through dialogue or stand-out visuals that it fails to achieve intellectual grandiosity, so it keeps things simple. Dylan says out loud key connections when they are made, which takes away from their profundity. But there is one amusing vision, where in his madness of trying to figure everything out in his apartment, he writes on a glass pane the very helpful phrase, “2:22 - BOOM!”

With a movie like this, it’s hard to tell where the good idea ran out, as it seems to have been lost many drafts ago. “2:22” really just wants to be seen as clever, which often renders something not very clever at all. 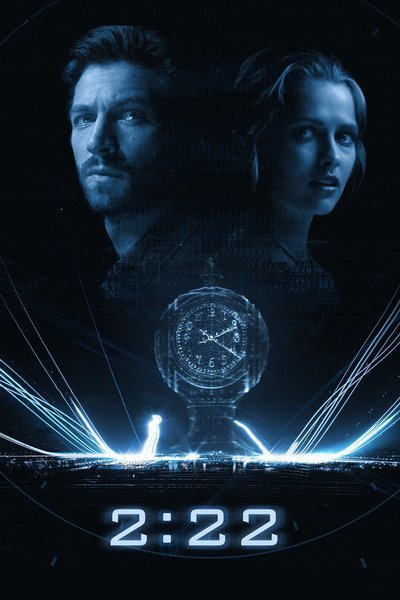 Rated PG-13 for violence and some sexuality.