Assuming that a conventional documentary about Australian musician Nick Cave would be unrewarding, the makers of "20,000 Days on Earth" wisely fed their mercurial subject's ego by allowing him to walk them through a semi-fictionalized account of a typical day in his life. Having previously directed some music videos for Cave's band The Bad Seeds, "20,000 Days on Earth" co-directors Iain Forsyth and Jane Pollard know not to underestimate Cave. In his music, he routinely celebrates/deconstructs his public persona: brutalizer, coward, agnostic, and wannabe deity. "20,000 Days on Earth" is accordingly not a biography, but a portrait of the artist as a work-in-constant-progress.

Advertisement
In "20,000 Days on Earth," Cave asks himself what performing today means to him. He paces the shoreline near his home while narrating archly about his God-like aspirations. Here, rain isn't just rain: it's a sign of Cave's mood. Cave then sifts through old photographs, reminisces with long-time collaborator Warren Ellis, takes Kylie Minogue for a drive, and even talks to a therapist about his father. These canned situations often lead to surprisingly candid interactions, as when Minogue jokes that Cave's dancing make him look like "an angry tree," or when Cave talks with guitarist Blixa Bargeld about why they parted ways.

While his conversations are consistently thoughtful, Cave never completely lets his guard down, not even when he's asked to describe his first sexual experience. He also never apologizes for being a diva, and characteristically refuses to bridge the self-imposed gap between himself and his fans, mostly because he routinely navigates that space through his music. So while Cave talks about terrorizing fans during live performances in order to feed off their energy, he doesn't discuss the weird pre-performance head-space that he and his band-mates routinely enter before concerts.

Still, Forsyth and Pollard keep Cave on task, and cannily made acting naturally the main theme of "20,000 Days on Earth," as we see in the film's best scene. Retreating to his recording studio, Cave lays down the vocals soundtrack for "Higgs-Boson Blues," one of the best songs on "Push the Sky Away," the Bad Seeds' most recent album. Cave's soulful performance, shot in real-time and in extreme close-up, is that much more impressive once you realize he's playing a song for Forsyth and Pollard before he's performed it in front of a live audience. More importantly, he's singing without the Bad Seeds, a group that serves as Cave's suit of armor. Cave knows he's not young anymore, and won't always be able to control his work or how its perceived. Watching him act accordingly is really inspiring. 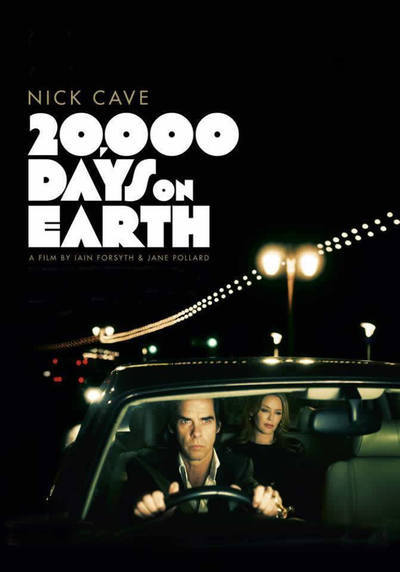