2 Days In The Valley

“2 Days in the Valley” has two subjects: twisted human behavior, and the complexity of its own plot. It looks like a crime movie, but crime is the medium, not the message; the crimes are an excuse for quick connections among strangers. What the writer-director, John Herzfeld, is mostly interested in are his peculiar characters, and the labyrinthine ways he can assemble them in the same story.

His method has been used before (the movie will remind you of Altman and Tarantino), but he's good at it. Herzfeld begins with inexplicable scenes and unexplained actions, and then connects the dots until everything comes together. The ending is neat and ingenious; the story is so complex, you wonder if he started there and worked backward.

I will not attempt a plot summary, which might take as long as the movie itself. Instead, here are some of the characters. Dosmo (Danny Aiello) is a hit man not without a trace of sweetness; he's afraid of dogs and likes to cook. Lee (James Spader) has hired Dosmo as a partner. He's a sadist who likes to pull out a stopwatch and give his victims 60 seconds to put their affairs in order. His lover is the icy Norwegian blond Helga (Charlize Theron).

Dosmo and Lee break into a bedroom being shared by a man named Roy Fox (Peter Horton) and his ex-wife Becky (Teri Hatcher), who is an Olympic skier but never placed higher than fourth. The woman is rendered unconscious, the man is killed, and . . . but I'm getting into the plot.

There are two cops: Wes (Eric Stoltz) and Alvin (Jeff Daniels). Wes has always dreamed of being a homicide detective, but finds himself on the vice squad, where he lacks the heart to entrap a sweet, harmless girl (Kathleen Luong) who works in a massage parlor. The cops stumble onto the murder scene without intending to and are thrilled to be working on a real crime.

Meanwhile, we meet Hopper (Greg Cruttwell), an obnoxious British art dealer, who has a kidney stone attack and is rescued by a man in a stolen car. Hopper's secretary (Glenne Headly) nurses him, although he constantly insults her with offers of breast implants and liposuction. Then Dosmo enters their lives by rolling down a hill after escaping from an exploding car, and holds them hostage while cooking them pasta.

And then there's Teddy Peppers, played by the director Paul Mazursky. Teddy is a suicidal screenwriter-director whose career has gone into the toilet. He plans his suicide but doesn't want to leave his little dog homeless. In one of the movie's best scenes, he encounters an actor (Austin Pendleton) who smilingly insults him without mercy, pointing out every milestone on his descent to the bottom of the industry. Meanwhile, a real homicide detective (Keith Carradine) is assigned to the murder, and his path crosses those of the vice cops and the Spader character, who is impersonating a cop.

All of these characters inhabit the San Fernando Valley, which is to Beverly Hills as hell is to Dante's Inferno. We sense that they're people who see success every day, who taste it and smell it and rub shoulders with it, but never have been able to grasp it. Like the Olympic skier, they've never placed higher than fourth. Yet they obsess about image; the art dealer, who has no sexual interest in his secretary, wants to pay for her plastic surgery because it will make *him* look better.

The plot underlies even the most inexplicable scenes and eventually links even the most widely separated characters, but what makes the movie fun is the dialogue and the behavior. I especially liked the Mazursky character, who dumps his Emmy in a trash can, and the Aiello character, who consoles the art dealer's secretary: “It's just part of his nature to be cruel--don't take offense.” The movie illustrates a world view shared by a lot of people in Los Angeles: If there are only six degrees of separation between any two people in the world, there are only two or maybe three separating everyone in the Valley from the rich and famous who light up the pages of the National Enquirer. A cop can become Joseph Wambaugh. A personal trainer can become Steven Seagal. A hooker can become Heidi Fleiss.

On the surface, there are great distances between those who have made it and those who are still on hold. But then you find they actually know one another in the most unexpected ways, often having to do with sex and ambition. It's fun to watch “2 Days in the Valley” in the moment, and then fun afterward to think about the way the story was put together, and all of those lives connected. 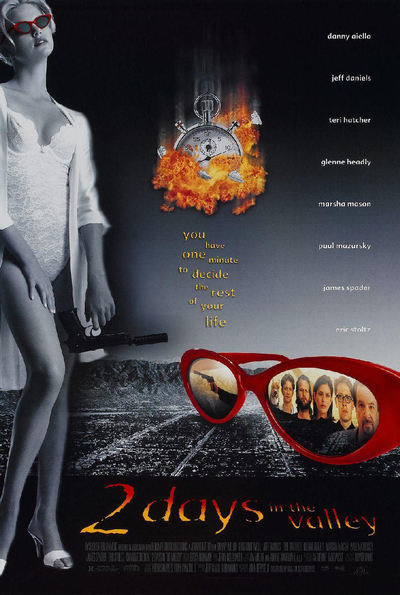