Like a lot of things that somehow end up as actual things online, this started as a joke on Twitter:

That stray reference by my pal Lincoln Flynn somehow led to a whole songbook of laments for Blockbuster.

As you probably heard, the onetime juggernaut of a video rental chain formally pulled the plug on most of its remaining retail stores this week. Just think of all those abandoned storefronts where people used to rent "Wall Street 2" or "Pain and Gain" or whatever; just think of what Bruce Springsteen, the bard of economic collapse, might have done with such a...well, I was about to type "catastrophic occurrence," but if you ever set foot in Blockbuster, you know that's not exactly what it was; it was more like a sector of the marketplace realigning itself with technological reality after years of denying the inevitable.

Which, granted, is not verbiage that Springteen would ever use in one of his Death of the American Dream songs—he'd probably restate all that in plain language, drop some g's, maybe work in a "Well" or a "Sir" to make the meter work—but whoa, hey, look, what have we here? Why, it's a bunch of Bruce spoofs. 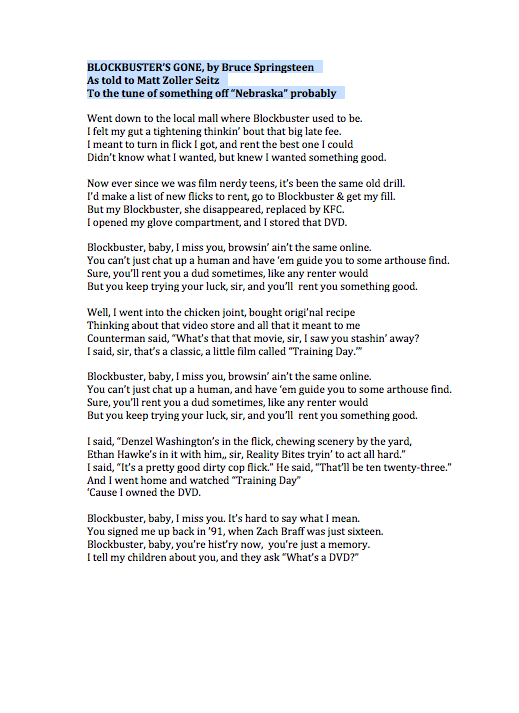 I published this online a couple of days ago, and other people got into the act. I've included a selection of their Bruce-mourns-Blockbuster songs here. Feel free to add your own in the comments!

The clerk wants me gone/Manager hates me so/this is the last straw/Probably I should go/but I had to watch Monica Vitti...

Blockbuster, you never had variety/but I still held out hope/even with your late fees/I kept being a little pill/but you never got more obscure films...

I saw them standing in a strip mall
Blue and white cases stretching far and wide
But we all went and joined Netflix
And 3000 stores up and died.

So it's Friday night around half past eight
And my DSL can't get no relief
We watch the buffer spinnin' like a circus plate
But there's no bandwidth that can hold our grief.

Well no everything dies, baby that's a fact
Maybe everything that dies some day comes back.

One soft infested summer me and Terry became friends
Recommended me some films that were foreign
Catching rides to the outlet looking for some stuff to rent
Ended up with a Steven Seagal flick, and a box of Junior Mints, yeah.

After a long day workin' at the dock
The whistle blows and you'd punch that clock
But now who's gonna tell us
"We ain't got that movie in stock"?

Jeff Bezos queued up “Iron Man” in Seattle late last night
And Reed Hastings streamed “Mean Machine” over the DSL line
Alec Baldwin sittin’ barefoot on his couch at home
Watchin “30 Rock” via Hulu Plus and Apple TV
Reed clicks off the flick, scrolls up his queue
“If you like prison soccer you might like The Flamingo Kid”

Well the Blockbuster Video ran out of the Flamingo Kid, and that one with the girl,
And the DVDs round there look just like coasters used for drinks, frisbee throws
From the suburbs to the malls, movie recommendations are silent in the world
As we take our snark down to streaming land….

I had a friend was a big VHS renter

Back in high school

Saw him the other night at the multi-plex

We walked back inside, saw a few flicks, but all he kept talkin' about

Glowin' blue and gold in my suburban night sky
Headin' there with Mary on the midnight ride
Smellin' stale popcorn as we walk inside
Blockbuster's empty now and nowhere to hide.

Goin' home tonight to my Apple TV
Netflix queue's got sumthin' to see.
Goin' home, now, my baby and me.
Streamin' killed the video store in twenty-one-three.

Well, Johnny, he killed that Blockbuster clerk/
Strangled him right there in line.
Pled guilty in the first degree/
Judge give him ninety-nine.
Johnny says "Judge, he recommended ISHTAR"/
Judge says "Boy, you done your time."
Now that Blockbuster, gonna join that clerk/
And Johnny's got Amazon Prime.

Film geeks wanna watch discs
Disc watchers just wanna stream
And streamers ain't satisfied 'til they rule everything
I wanna stay in tonight
I wanna find out what Godards you got.

Daddy, what was a video store?

Four years sittin' in the back of your car

Never made it to the VCR

Jenny's hair was wavin' in the summer breeze

Said "It'll be alright, you don't have to pay those late fees."

You make up your mind, you choose the film you take
You walk to where the aisle ends and the cashier breaks
Back at your house you watch until the day
You learn to sleep at night with the price you paid

Now with their hands held high, they decided to die
And in one last breath they closed all the stores they rode to their death
No more video rents on through the night, unable to break away
From the senselessness of the price you paid
Oh, the price you paid for those videos
Now you can't walk away from the price you paid
At Blockbuster.

I hold you in my arms, then I insert the tape,
What are those sounds that're whispering, when your slot is agape,
I went to you last night, didn't care the cost,
To say goodbye and know, just what was gone in the this old thing I've lost.
So tell me what I see, when I look down your aisles,
Is that you, 'buster, or just a brilliant demise.

I heard 'holders call your name, underneath our window,
I saw packets tucked in shame, underneath your pillow.
Well I've tried so hard, 'buster, but I just can't see
How this math can add up, to a company.
So tell me what I see, when I look down your aisles,
Is that you, 'buster, or just a brilliant demise.

I was just sixteen, and running with the Blues Brothers in my hand
Into the video store that was owned by my old man
A couple years later, that yellow and blue was the big new thing in town
I was workin’ for my daddy,
but there were fewer and fewer customers when I looked around
‘Cuz of our Blockbuster
It was a mom-and-pop buster
That was your Blockbuster
Now it’s our Blockbuster

My daddy used to work as a video clerk
At the Blockbuster downtown
Chargin’ late fees for the DVDs
Like a timecard punching clown
Then they closed the store, and my daddy swore
It was time to say goodbye
Like turtles on their backs, or like Betamax
There was nothing to do but die
So goodbye to Dad
And the dreams he had
And the tapes he stole back then
Now I drive his car
Use his VCR
And I’m watching
Rio Bravo
Again.