Please, critics, write about the filmmaking

My colleague Sam Adams runs a weekly survey at CriticWire, in which he poses a question of the week to people who write about film and television. This week's query inspired an especially rich batch of answers.

Q: Jazz critic Ted Gioia recently lodged a complaint that "music criticism has degenerated into lifestyle reporting" because most most critics lack a musical background and theoretical tools. Do movie critics need filmmaking experience or an understanding of film theory to do their jobs?

Gioia's piece, which was published at The Daily Beast, was the op-ed equivalent of a nun rapping inattentive students' knuckles with a ruler. It's mostly an argument in favor of music critics knowing a little bit about the actual process of writing and performing music, and finding a way to work that knowledge into their reviews. "Imagine, for a moment, football commentators who refuse to explain formations and plays. Or a TV cooking show that never mentions the ingredients," he writes, "or an expert on cars who refuses to look under the hood of an automobile. These examples may sound implausible, perhaps ridiculous. But something comparable is happening in the field of music journalism. One can read through a stack of music magazines and never find any in-depth discussion of music.  Technical knowledge of the art form has disappeared from its discourse. In short, music criticism has turned into lifestyle reporting."

Gioia probably goes a bit too far, even if you consider hyperbole a valid rhetorical tool, but not so far that he loses track of a valid point: art is not just about content, and it's not just about the emotions we feel as we contemplate it. Art is also about process. It's about form. It's about expression.

And in much of music criticism, Gioia argues, there's precious little attention paid to any of those things.

"On a few occasions, a reviewer might mention the instruments involved in the making of an album—but usually skipped these apparently tedious details. I couldn’t find any cogent analysis of how these instruments were played. (No, I don’t count 'totally shreds' as cogent analysis.) I didn’t read a single discussion of song structure, harmony, or arrangement techniques. Who knows, perhaps editors have forbidden the discussion of music in articles on musicians. Judging by what I read, they want scandal and spectacle. Certainly the artists who deliver these get the most coverage, and musical talent be damned."

I can't speak to the validity of the writer's observation with regard to music criticism. I stopped reading most music criticism some time ago. But I can tell you that it's absolutely valid when it comes to writing about film and TV.

I told Sam: "I'm sure there'll be a lot of nitpicking over specific aspects of his piece, but his general point seems irrefutable to me: in criticism of every kind there is appallingly little careful consideration of form. I see a lot of writing that describes what a piece of art is about, not so much about how it is about it. As for his insinuation that most of the people writing about music have no idea how to describe music, I'm sure he's right. A good many people don't bother to describe, much less evaluate, filmmaking in film reviews, and in that case there are somewhat concrete visuals that you can grab hold of. Faced with the daunting prospect of describing the success or failure of a rhythm track, horn arrangement or three-part harmony, I'm sure a lot of music writers throw up their hands and reach for meaningless words like 'shredding.'"

I was being diplomatic.

During any given week it's possible to read tens of thousands of words of evaluation and analysis about this show or that movie, in reputable mainstream publications with strict editorial standards and on personal blogs where writers are theoretically free to write about whatever they want, in any manner they choose, without ever coming across one sentence that delves into form in any detail.

If you know me personally—or even virtually—you know how much this pisses me off.

Movies and television are visual art forms, and aural art forms. They are not just about plot, characterization and theme. Analytical writing about movies and TV should incorporate some discussion of the means by which the plot is advanced, the characters developed, the themes explored. It should devote some space, some small bit of the word count, to the compositions, the cutting, the music, the decor, the lighting, the overall rhythm and mood of the piece.

Otherwise it's all just book reports or political op-eds that happen to be about film and TV. It's literary criticism about visual media. It's only achieving half of its potential, if that. And it's doing nothing to help a viewer understand how a work evokes particular feelings in them as they watch it.

Form is not just an academic side dish to the main course of content.  We critics of film and TV have a duty to help viewers understand how form and and content interact, and how content is expressed through form. The film or TV critic who refuses to write about form in any serious way abdicates that duty, and abets visual illiteracy.

I'm not talking about how film and television deals are made: who's hired, who's fired, which show gets green-lit or canceled.

I mean nuts and bolts: where the camera goes, and why it goes there. Why a scene included a lot of over-the-shoulder shots of a character speaking, even though the angle prevents you from seeing their lips moving. Why a particular scene was played entirely in closeup, or entirely in long shot.

You don't have to go out and live it. You can read about it. You can ask professionals about it. But you should learn it, and know it and, in your writing, show evidence of learning and knowing it.

We have several successive generations of film watchers—some of whom consume TV and movies voraciously and have surprisingly wide-ranging tastes—who don't know how to interpret a shot, or how to think about what the size or position of characters in a frame might tell us about the story's attitude toward those characters. That's a problem.

We have critics and viewers who can agree that a particular episode of a particular show ended in a "shocking" or "unsettling" way, but they don't think about the role that, say, a jaggedly timed cut to black or atonal music cue might have played in provoking that reaction. That's a problem.

We have critics who will praise a particular pop song as being the "perfect" accompaniment to a particular montage in a Scorsese movie or an episode of "Mad Men," but then skip merrily along after that, never elucidating why the song was perfect: because of the tempo? The lyrics? The instrumentation? The way the strings complemented the swooping camera?

If you don't fit the above description, congratulations on not being part of the problem; if your back was up, you can return it to its customary position of repose. 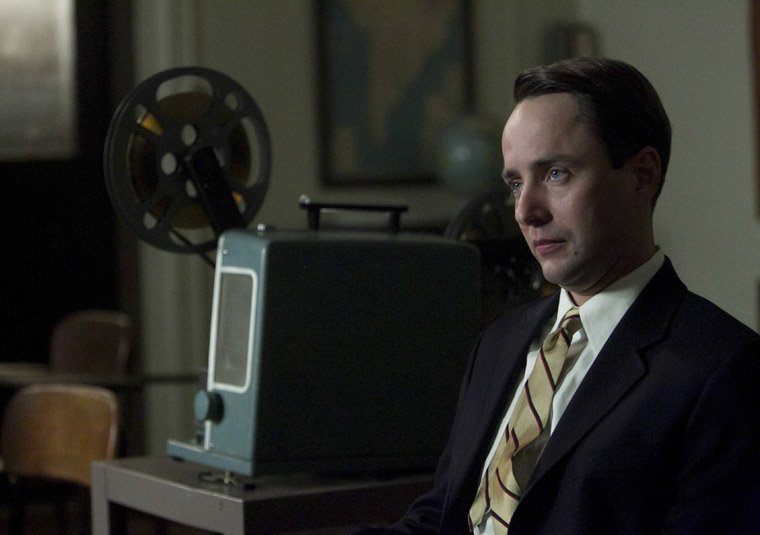 I refuse to accept the argument that if your writing focuses on, say, issues of politics—race, class, gender, representation in general—then there's no urgent need to comment directly on form.

That's an evasion of the film and TV critic's duty, and an excuse for not doing something because it's just a little bit harder than whatever you're used to.

Form is the means by which content is expressed. Don't shortchange it for reasons of personal convenience.

In "12 Years a Slave" there's a marvelous crane shot that starts looking through the window of a jail cell where the hero has been chained, then rises slowly up, over the rooftop, to reveal the city skyline, and in the background, the U.S. Capitol. This shot is saying something, and it's saying it with images: the horror of slavery unfolded in the shadow of the very institution that gave America the laws she supposedly held dear. (And here's a lovely and chilling grace note that a critic friend just pointed out to me: in the shot, the Capitol dome is unfinished.)

This is not, to put it mildly, a difficult shot for viewers to decode. But it's one of many crucial ones in "12 Years a Slave." I have yet to encounter any review in a mainstream publication that mentioned it, or that mentioned the design of any shot or sequence in that intricately constructed, powerfully visual movie, save for the image of the hero seeming to look beseechingly at the viewer.

But then, one almost never encounters sustained discussion of, or even vague allusion to, filmmaking itself in most film and TV criticism.

It's as if the writers, or their editors, are utterly terrified that the reader will think them snooty if they mention the images of which the film is comprised.

We see adjectives such as "visceral" or "gritty" or "shaky" or "elegant" thrown around like handfuls of confetti, with no elaboration as to why a particular scene or shot or moment earned those adjectives. We read film reviews which state that the film was "well-shot" or "beautifully shot" but never go further than that.

When I complain about the short-shrifting of form by movie and TV critics, I often get defensive responses: "Well, they only gave me 500 words." Or "The filmmaking was undistinguished, that's why I didn't say anything about it." Or "The editor wanted me to concentrate on the plot and characterizations and performances because, well, you know, we're mainstream." Or, "I'd love to write about the images, but I'm not a visual person, so that's not really my area."

If you only have ten sentences to play with, set aside one sentence to make an observation about some aspect of the filmmaking. Otherwise you're not contributing to visual literacy. You're not helping.

Lack of space is no excuse.

Lack of editorial endorsement is no excuse.

Lack of knowledge of composition, editing or any other aspect of filmmaking is no excuse; there are dozens of reputable books designed to teach the rudiments of film form to anyone who can read English, most of them are written by David Bordwell and Kristin Thompson, and you can buy one of them for the cost of a decent restaurant meal.

Write about form. A little bit. Not all the time. Just whenever you see an opening; whenever you think it might make sense, and call attention to the fact that we don't just mysteriously, magically feel things while we're watching movies and TV shows: that the filmmaking is what made us feel those things.

The decision to get close to an actor's face as opposed to hanging far back. The decision to let an intense confession unfold without music. The decision to light a brown-skinned actor so that his facial features are swallowed up, while his white costars' faces are etched in loving detail. The decision to cut away from an act of violence, or to move in tight, or to show it again and again from different angles.

They matter more than most viewers realize, and it's our job as critics to help them realize it.

Films and TV shows are made by filmmakers.

Write about the filmmaking.