When filmmaker Harun Farocki died last week at 70, critics and artists mourned him. Among them was Houston-based critic Michael Sicinski, who writes about movies for CinemaScope and Cineaste and on his website The Academic Hack. He said on Twitter that he'd studied only briefly with Farocki but that the experience had a profound effect on him. I asked him if he wanted to elaborate on that statement, and perhaps explain his importance to people unfamiliar with his work; the result was this extraordinary email, which I'm publishing in its entirety here.—Matt Zoller Seitz 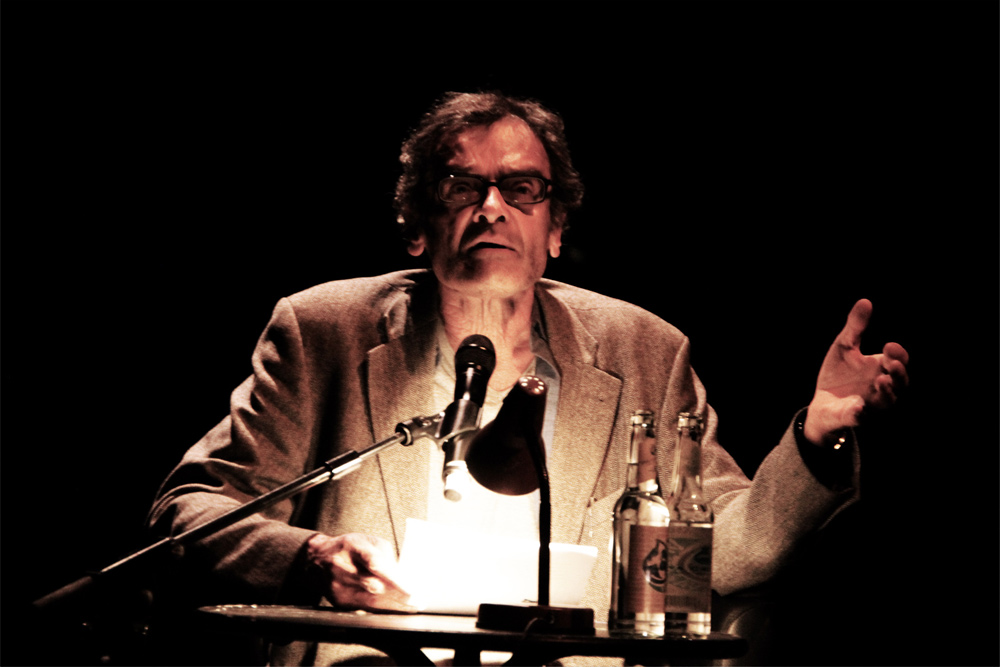 Although it is factually accurate to call Farocki a “German documentary filmmaker,” all three of the words in that phrase seem somehow inadequate. Calling Farocki “German” is probably the most unproblematic of the three designations, as he spent much of his career based in Berlin, identified quite deeply with German film culture, and eventually became something of an axiom within it.

Farocki was born in January of 1944 in Nazi-occupied Sudetenland, the present-day Czech Republic. His mother was German, his father an Indian-German. After the end of World War II, Farocki’s family lived in India and Indonesia, but he returned to Germany and, at age 22, entered the Deutsche Film- und Fernsehakademie Berlin (dffb), a school now particularly well known as the wellspring of the “Berlin School” of contemporary German cinema.

Although Farocki’s training and aesthetic interests were deeply bound with German history – the New German Cinema’s commitment to excavating and exorcizing the Nazi past, as well as retrieving the humanistic values of Weimar cinema – his political interests inevitably made him as much a global filmmaker as a specifically German one. This can be seen in films such as 1992’s Videograms of a Revolution (made with Andrei Ujica), one of Farocki’s better-known works. It is a critical examination of the Romanian revolution, made using real-time television footage from the Ceausescu regime intercut with analytical commentary. (The likely influence of this film on the fine work of Corneliu Porumboiu is certainly worth considering.) 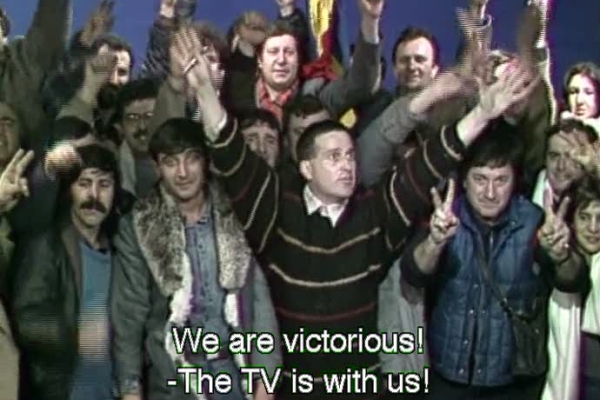 Some of Farocki’s later efforts also move well beyond Germany’s borders. His 2000 work I Thought I Was Seeing Convicts (which exists both as a single-channel tape and as a video installation) exposes the California correctional system’s underlying practices by patiently working with surveillance footage from the state pen in Corcoran. And In Comparison (2009), one of Farocki’s last films to receive wide exposure in the U.S., is a meticulously assembled observational documentary about, of all things, brick production around the world. Using his carefully articulated mode of montage, Farocki created visible dialectical relationships among the material practices of production in France, Germany, India, and Burkina Faso. In a remarkably deft homology worthy of the Russian Formalists, Farocki created
Advertisement
In Comparison as a story of bricks whose piece-by-piece construction directly mirrored its subject matter.

At the same time, of course, Farocki never failed to bring his cultural critique right back home to Germany. Like New German Cinema fellow-travelers Jean-Marie Straub and Danièle Huillet (with whom Farocki worked on their Kafka adaptation Class Relations), Farocki considered the repression and capitalist acquisitiveness of postwar West Germany to be a form of cultural amnesia, a way to both sublimate Nazi guilt and to divert all that well-honed discipline into more acceptable channels. Farocki’s efforts along these lines were sometimes highly focused, as in An Image (1983), which displayed the tedious production process behind a Playboy centerfold, or the later Still Life (1997), which expanded on John Berger’s thesis regarding the connections between Renaissance still life paintings and contemporary advertising photography by providing deep analysis of the former, and again showing us how exactingly the latter is constructed.

Farocki was a deeply materialist filmmaker who saw the editing process as a site for the physical construction of argument. This meant that, ultimately, a film could and should connect Germany with the world, and also the documentary form with other modes of address. When I indicated above that calling Farocki’s work “documentary” is partly inadequate, it is because the artist so often relied on speculative fiction, re-enactment, or the analytical conjecture constitutive of the essay form, all in the service of achieving truthful arguments. The two films that remain Farocki’s finest achievements exemplify this willingness to move outside the confines of simple reportage. 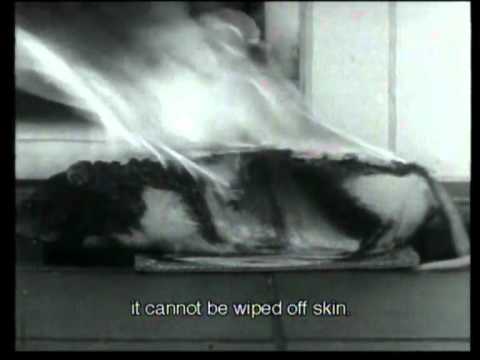 1969’s Inextinguishable Fire is one of several early films Farocki made in protest of the Vietnam War. In this case he is specifically addressing the use of napalm, and directly condemning Dow Chemical Corporation for manufacturing it. Working in a Brechtian theatrical mode, Farocki sits at a table as a kind of narrator / host, discussing the effects of napalm. The filmmaker rolls up his sleeve and snubs out a cigarette on his own arm, then notes that napalm burns seven times hotter. The majority of the film features intentionally stiff performers at a makeshift Dow Chemical plant, trying to reckon with their role in manufacturing hot liquid death.
Advertisement 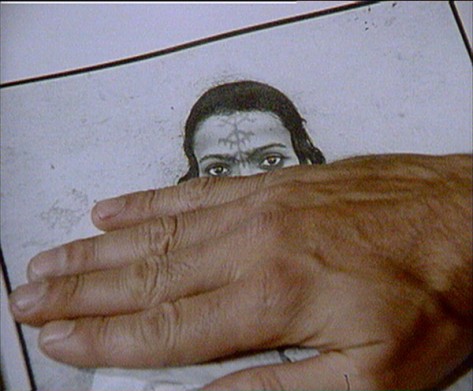 1989’s Images of the World and the Inscription of War is a very different film, one that contains no performance segments but is sprawling in its essayistic reach. Containing scenes of robotic architectural etching, fluid wave analysis, photographs from Auschwitz, and theories of perspective from the Renaissance onward, Images is Farocki’s grand statement on human culpability with respect to knowledge and ignorance. There is no neutrality in how we perceive the visual world, the film argues. The key fact around which Farocki organizes his other related ideas is the discovery that Allied reconnaissance pilots photographed Auschwitz during World War II and were in position to destroy it. However, the pilots didn’t know what it was, were not looking for it, and so the images were misinterpreted, costing thousands of Jewish lives.

As is certainly clear, Farocki was a deeply intellectual artist, and the impact he has had on film culture has been a decidedly critical one, based in a belief that images are constructions to be interrogated both in art and in life. When I claimed, finally, that “filmmaker” was yet another inadequate appellation for the man, it was because his total practice encompassed so many more vital elements, some of which may even prove to be more influential than his films. Lately Farocki had been showing more video installation work in galleries, sidestepping the problematic selection processes of film festivals. 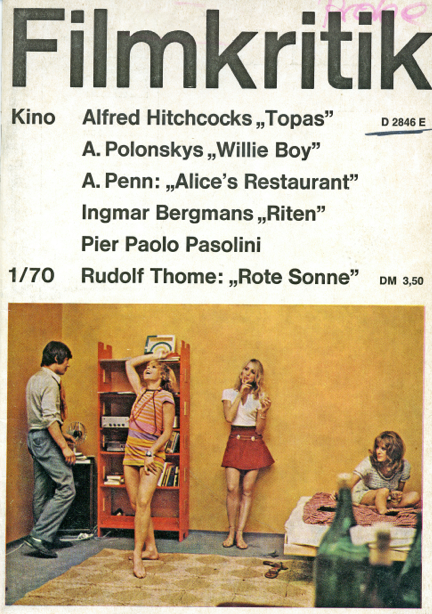 But Farocki also had a significant career as a writer, editor and theorist. From 1974 to 1984 he edited the highly influential German magazine Filmkritik, a publication that focused less on reviews and evaluation than on formal analysis, explicating how important films performed their rhetorical work. Some of Farocki’s major essays from this period are collected in the book Nachdruck / Imprint, available in a German / English bilingual edition.

The spirit of the Filmkritik project – analysis over “criticism” can be seen today in the German film magazine Revolver, edited by Christoph Hochhäusler and Benjamin Heisenberg, younger filmmakers associated with the Berlin School. And, of course, one cannot mention the Berliners without noting that Christian Petzold, one of the members of the first generation and the director who has become something of the group’s international standard-bearer, had a long association with Farocki. Beginning with Petzold’s breakthrough film The State I Am In (2000), Farocki was the co-writer on Petzold’s films Ghosts (2005) and the recent Barbara (2012).

And Farocki was a teacher. He recently held a post at the Academy of Fine Arts in Vienna, and taught at Berkeley for several years in the 90s. I was fortunate enough to be at Berkeley back then, and I was able to take a class with Harun. The course was co-taught with Kaja Silverman; the two of them were also working on their excellent, underrated book Speaking About Godard at the time. The premise of the course was theory and production, considering the relationship between the still and the moving image. I was utterly hopeless behind the camera, and luckily the lousy video I made has been lost to the winds of time.

But Harun’s pedagogy – direct, occasionally gruff, but unfailingly supportive and based in a rare, active listening – had a real impact on me. In one of the best lessons of the course, Harun loaded his 16mm print of Images of the World onto the school’s Steenbeck flatbed so we could discuss his editing decisions one by one, for nearly three hours. This simple gesture helped to open a world of possibility for me, just to think of “cinema” as material stuff that was arranged, could be rearranged, and therefore different. As I’ve continued watching Harun’s films over the years, new lessons were unfailingly revealed.