We Become Completely Different People: Asghar Farhadi on “The Salesman”

About a third of the way into Asghar Farhadi’s riveting seventh feature, “The Salesman,” a woman named Rana (Taraneh Alidoosti), leaves her apartment door open, expecting her husband, Emad (Shahab Hosseini), to enter. She leaves the room, and the camera remains focused on the door just long enough for the audience to squirm with unease. What happens next threatens to dismantle the couple’s relationship, as well as their current stage production of Arthur Miller’s masterpiece, Death of a Salesman. Farhadi’s richly provocative script earned him a Best Screenplay prize at Cannes, and he is widely expected to receive his third Oscar nomination this year in the Best Foreign Language Film category.

With the assistance of an interpreter, Farhadi spoke with RogerEbert.com at last year’s Toronto International Film Festival about his love of Billy Wilder, the importance of empathy and his desire to combine theatre and documentary techniques while making a film.

I have fond memories of you accepting the Chicago Film Critics Association’s award honoring “A Separation” as Best Foreign Film back in 2012.

I like Chicago, and I also traveled there with my third film, “Fireworks Wednesday,” which won the top prize at the Chicago International Film Festival. When I’ve traveled with my films in different countries, and have gotten to see the films with different audiences, it has been very interesting to see how everyone reacts the same way around the world to each film. It’s not just that their reactions are similar, it seems that everyone around the world is the same in many ways.

Was “The Salesman” partly inspired by your background in theatre, having earned an MA in Stage Direction?

If I didn’t have that period of theatre in my life, I wouldn’t be sitting here right now. That period was very important to me. That’s when I got introduced to the theatre literature of the foreign countries outside of Iran. I also developed my taste during that period of time. Arthur Miller was one of the writers who influenced my work. One of the specific things about Miller that I really like is that his characters are not divided into black and white. That is a principle I follow in my own work. For example, we can’t say for sure whether Willy Loman is wrong or his son is correct. Sometimes we are with Willy Loman, and sometimes we are with the son. In this film, it was important for me to dissolve the line between theatre and real life. They kind of blend into each other. I really wanted the audience at some point to ask themselves, “Are we watching theatre right now or is it real life?”

“About Elly,” “A Separation” and “The Salesman” all have an inciting incident that occurs deep into the picture, after the viewer has gotten into the rhythms of the characters’ lives.

It’s like a billiard table. You put all these balls down on the table, you hit them with another ball and all the balls spread out around the table. At the beginning of my films, the characters are usually in their normal situations. Then something hits them and they start to see another side of themselves that they didn’t know existed. It’s difficult to understand ourselves when we are in a moment of crisis. Just imagine that we are having this conversation in a car as we are heading out on a trip. Everything is going fine, and then somebody comes with a gun and threatens us. Then we are not ourselves. We become completely different people. 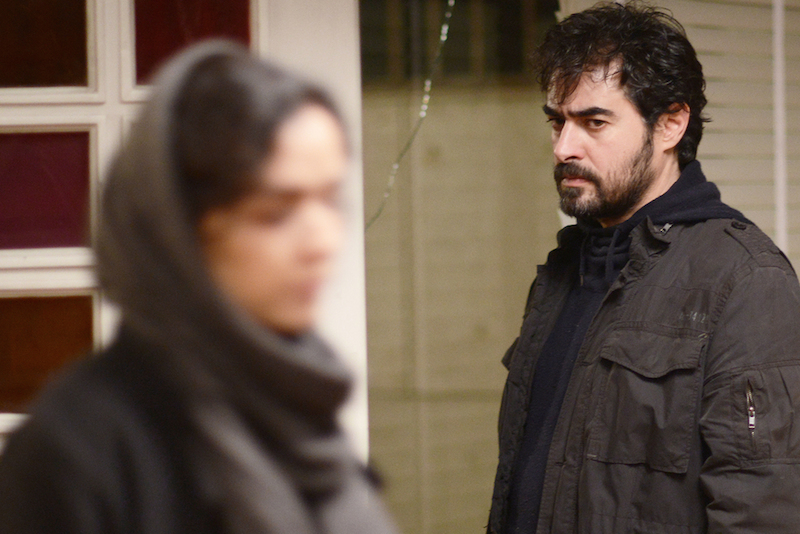 These crises often occur because of a misunderstanding, which can be viewed as a microcosm of greater world conflicts.

I think that misunderstandings are a phenomenon that is currently spreading throughout the world. In this new era, although we have technology that allows us to express ourselves to other people all over the planet, it seems that misunderstandings between cultures are only growing. Whenever we talk more, we have more misunderstandings as well. Sometimes we don’t understand what the other person is saying to us, but sometimes we just don’t understand the reaction and the attitude of the other person. These days, the most important questions that I have in my life are moral questions. Although there are many different angles in my films that the audience can focus on, the angle that I personally like the most is the moral angle.

How is that moral angle reflected in how you frame each scene?

I really try to prevent my camera from forcing an idea upon the audience. I don’t allow my camera to be judgmental just as I don’t divide my characters into the good and bad. I always want the space between the different characters to be exactly the same. On the set, I am a very serious person. I’m not angry, I’m just serious, and I like to know what’s going to happen beforehand. I’ve already planned everything in my head, but I don’t get too hard on myself. If anything new comes to my mind, I won’t say, “No, forget it. It wasn’t in my head before.” I’ll try to do it. My approach is tricky because it’s kind of a combination of theatre and documentary. These things are not at all the same, but I really try to achieve a balance between them.

The most important thing for me is that my films look like documentaries. They have to feel like real life, not cinema. All of the actors have to collaborate in a way that makes their interactions feel real. It’s like theatre in that their movement and their words are precise, but they must perform them in a way that feels natural, as if they came up with them on their own. When people in Iran ask me, “Have you written those lines or did the actors improvise?”, it makes me very happy because that’s how it should feel. These are their words, not something that I wrote.

Shahab Hosseini won the Best Actor prize at Cannes for his performance, and also acted in “About Elly” and “A Separation.” What attracts you to working with him?

When I was casting for “About Elly,” I was initially hesitant to work with Shahab. The films that he was acting in before were very different in nature from the way I like to work. But the first couple of nights that he came to set for rehearsal, I saw something in his eyes that made me realize that we would have a good working relationship. He’s a very emotional person and was very helpful with assisting me in creating the emotional conditions for a particular scene.

You have a gift for crafting great female characters, and Rana in “The Salesman” is no exception.

I don’t really know where that comes from, but throughout my whole life, I’ve liked and respected women more than men. Women take on more responsibility and are more forgiving than men. They look at the future because they are often preparing for the day when they will have a baby, whereas men are often more preoccupied with their past. Maybe because of all the limitations in my country, women are trying harder than men, and that’s why they are stronger. There are more women going to universities in Iran than men. When I went to France and made a French film [“The Past”], the female character was no different from those in any of my other films. It’s possible that my views on women were shaped in Iran, but anywhere that I go and work, my perspective never changes. 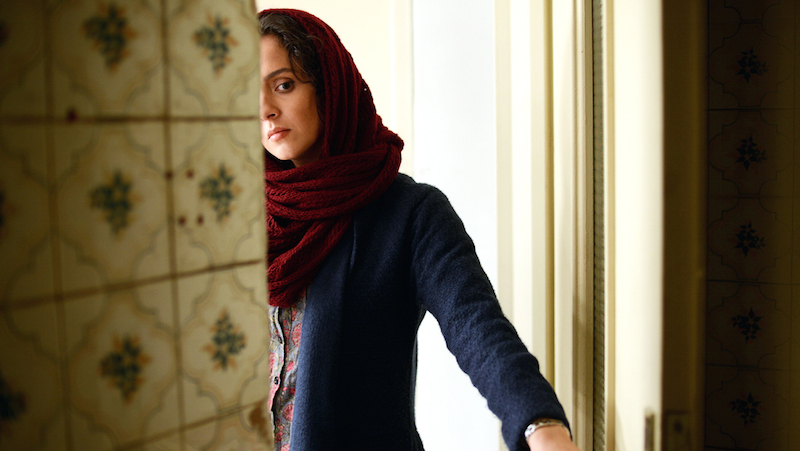 Roger Ebert selected “A Separation” as his favorite film of 2011, and wrote that your “only agenda seems to be to express empathy.”

We have a word in Farsi, یکدلی, that translates as empathy, and that is what I invite the audiences to have with my characters. I really do my best to portray the characters in a way that makes the audience understand them and feel them. Even if they do something that you do not agree with, you understand why they are doing it. Oftentimes in Iran, people will go see a movie and then immediately start to discuss it with one another. If you go onto social media sites, you see that people are talking with each other about my films and having arguments about them. It’s sort of like a school for me, helping me to understand the perspectives of those who watch my films. That’s how I look at it. There are some very radical critics from the government who hate my films, in part because they believe my work presents a negative view of Iran for Western audiences.

What sort of impact did “A Separation” have on the Iranian film industry?

It didn’t have a direct influence, but it had an influence. Both that film and “About Elly” introduced Iran to a new language of cinema. It was rare to have these sort of films that blend drama with a sense of reality. Either the audience liked a movie or the critics liked a movie, they rarely ever liked the same one. But this new cinematic language brings the audience and critics close to each other. The audience likes the drama of the story, while the critics like the realism. That’s why both sides like my films very much.

I consider Billy Wilder an influence of mine. Although his stories are comedies, there is a great deal of suspense in the way that he tells them. The same could be said about Hitchcock, though in Hitchcock’s movies, the realism is not very bold. In terms of comedies, my tastes are closest to Billy Wilder’s works. They are stories of ordinary people who get into very extraordinary situations, and then have to deal with them. He also opens up the door to criticizing society.

I’m always struck by how you resolve your narratives with a question mark.

The stories in my films are closed. They ended. It’s not the story that is open-ended, it’s what occurs afterward. In America, you call it an epilogue. By the end of “The Salesman,” we know what has happened to one key character, but the story of the main characters is still open. It seems as if another story is starting as the credits begin to roll. Everything that you see within the frame helps you to envision what exists outside of it. Most of the film takes place inside an apartment, but once the film has ended, you feel like you have seen the whole city.