Walking Into the Locker Room: Tyler Hoechlin, Will Brittain and Blake Jenner on “Everybody Wants Some!!”

The sneak preview of Richard Linklater’s “Everybody Wants Some!!” at Chicago’s Music Box Theatre, scheduled a few days after its SXSW premiere, was one of the most joyous preview screenings I’ve ever attended. The audience members, many of them college-age, could’ve cared less that the film was set in the ’80s, just as its spiritual predecessor—Linklater’s 1993 classic, “Dazed and Confused”—was set in the ’70s, and that film’s unofficial predecessor—George Lucas’s 1973 landmark, “American Graffiti”—was set in the ’60s. All three films elicited laughter from audiences who were still in diapers during the eras that were depicted, and yet they were laughing out of recognition all the same.

Linklater has tapped into truths of young adulthood that transcend generations, and his latest picture plays like a euphoric rush of adrenaline. The first week of college is a mere weekend away for our central protagonist, Jake (Blake Jenner), and he plans to spend his free time getting to know the teammates on his college baseball team, including a competitive senior, McReynolds (Tyler Hoechlin), and an oft-ridiculed outcast, Billy (Will Brittain). RogerEbert.com spoke with Jenner, Hoechlin and Brittain about their collaboration with Linklater, and the ways in which their own college experiences influenced their approach to the film.

We’ve recently seen many disturbing films about college life, such as last year’s documentary, “The Hunting Ground.” What I find so disarming about this film and its predecessor is the good-natured quality of its characters. The hazing scenes in “Dazed and Confused,” particularly between the women, are surprisingly warmhearted.

Blake Jenner (BJ): I think this film accurately captures the stages toward seniority that a new guy faces in school. I didn’t go to college, but I went to high school. I wasn’t doing sports or anything like that, but I was in the theater department, and the seniors were always the ones that got the lead roles. If any freshman got the lead, they would have to be really f—king cool, or else the seniors would beat the s—t out of them. You had to kind of earn your spot. What’s different about the hazing in this film as opposed to “Dazed and Confused” is that here, we all have to live together, and we’re also on a team. So the hazing is more about gearing them up and trying to make them feel welcome. The seniors went through everything that the freshmen are going through, so it’s all in good fun.

Tyler Hoechlin (TH): Having played college ball, I’ve found that it has that same element, though we didn’t do any hazing because it was illegal by the time I played. Just as the guys ahead of us had tested us to see what we were made of, we wanted to do the same for the new guys that came in when my friends and I were upperclassmen. You realize that, as an athlete, that sort of testing helps you. It acclimates you to what you’re going to be going through with this group of guys. They’ve been there, they know what it takes to succeed at that level, so they’re kind of doing you a favor. Through pushing the freshmen and trying to make them uncomfortable, you become a mentor to them, in a weird way. At least that’s how I saw my character, He’s kind of a d—k at first, but in the end, he’s really there to help these guys along. We don’t get to that point, but that was always the mindset. I remember those college days very clearly.

Will Brittain (WB): Yeah, for me, the college experience was so much about new experiences. I came from a small town in northeast Texas and I went to UT in Austin. I had never been to a city that big before—it was all new to me. My character was very similar in that way. He’s like, “What is this? You’ve got all these different guys and they're all giving you crap.” But it is a little bit different when all the guys are ballplayers. You’re only going to haze a guy until he earns your respect, and once you see that he’s a baller, then you cut him a little bit of slack.

TH: I actually liken it to the experience of us showing up on set. When we were rehearsing for the first three weeks, we challenged each other in the greatest way because everyone was pushing themselves. People kept looking at each other and going, “Gotta keep up with him.” It’s not a negative mindset, it’s a challenging one. I need you to keep up so that we, as a team, can succeed. If you’re going to take my job, then you better be really, really good.

WB: And that totally happened too. For the first two days at Rick’s farm, everyone was kind of sizing each other up, giving each other s—t, because we already knew who their characters were. You knew Tyler was “the McReynolds,” so we knew that he was cool. Blake and I are good athletes, but we’re not great baseball players, so we’d be like, “Man, these guys are good. Dude, do you want to sneak off and work on the pitching?” It was cool because once we hit that first read-through at Rick’s library, everything sort of shifted after that. We all got really excited about the fact that everyone was owning their characters, and we figured that the movie would be awesome. You could just tell right away. 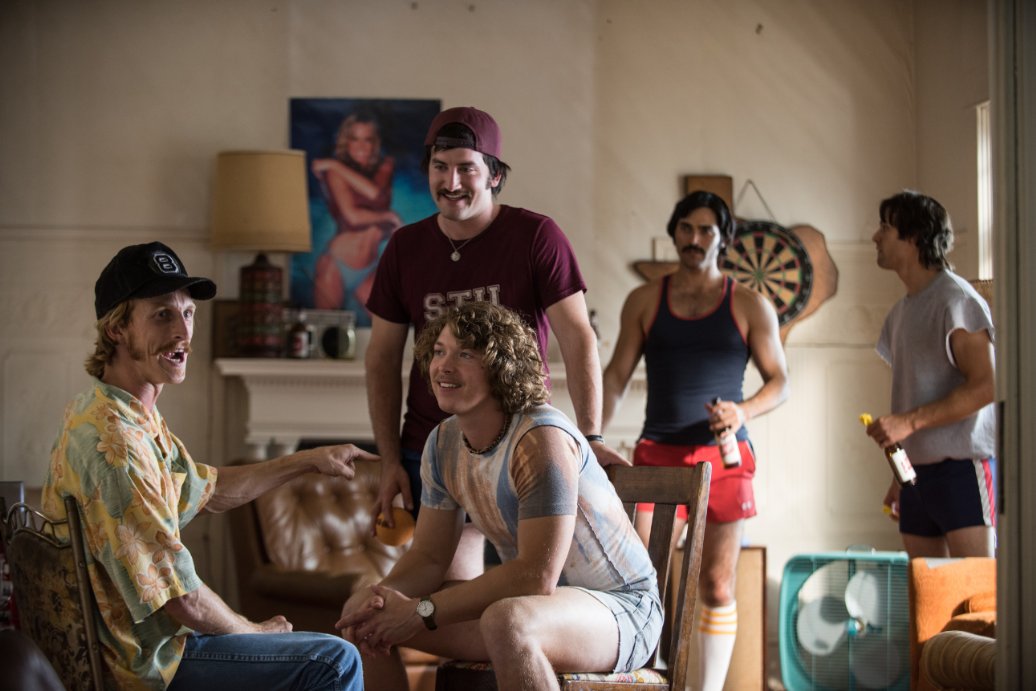 As is true of all Linklater films, the character interactions here feel completely organic. How much of an active collaborator does he allow you to be throughout production?

TH: I can’t imagine working with a director who would be more collaborative that Rick. I honestly can’t. We ended up taking every opportunity to just let things play out. We’d go to baseball practice and we would kind of block the scenes as they were written in the script, but Rick was so generous in allowing you to find things and create things on your own. Even in those spaces where you would usually just say what was on the page, we would randomly throw stuff out there and see if it worked. Then we’d go up to Rick and say, “We were messing around with this when we did the blocking, do you think we could try that?” and he’d be like, “Yeah, we’ll try that at the next read.” And a lot of that stuff makes it in. He really gives you the freedom to play.

BJ: You don’t get that often, especially when you’re working with a director who wrote the script. So many other directors would’ve just taken that first draft and stuck to it. They’d use the script as a playbook and go, “We need this joke here.” But when you’re onset with Rick, if you have a good idea or a line that you’d like to throw in there, he encourages it. There were entire scenes that were formed onset and ended up being in the movie.

WB: It was so impressive for me to watch Rick and see how relaxed and laid-back he was with his material. We would read a scene and it would be popping, but Rick would see little moments that he felt weren’t working, and we’d change them. For instance, Tyler and Juston Street [who plays Jay Niles] had this encounter between their two characters, and I remember how that scene grew over time. Tyler and Juston would go off on each other for like twenty minutes, and all of us would be standing there, watching them. Finally, Rick would be like, “Okay, you said this and you said this. Let’s keep that and move on.” That’s how it happened every time. He’d pluck those moments out and then you’d get a new draft of the script. We’d get a printed draft the next morning, and you’d look through it and go, “Yes! That moment made it in!”

That must’ve played a role in helping the script avoid certain contrivances. Jake’s character arc is much more subtle than what we’re used to seeing in a protagonist.

BJ: I was confused at first. My character was originally named Blake, and it was during rehearsals for that first car scene with the guys that Rick told me, “Blake is confident. Where he comes from, he’s like the McReynolds. He was The Guy of his high school, but here, he’s nobody.” So you’ve got to know that fine line between being a man—knowing bulls—t from the truth and standing up for yourself—but also knowing your place as a freshman. The film takes place over a three-day weekend, and my character is just getting to know these guys a little bit. Nobody shows all their cards when they first meet, they’re still feeling each other out and having a good time. Once Rick told me that, that’s kind of the way I saw it.

Will, I saw you in another terrific film—Hannah Fidell’s 2013 drama, “A Teacher”—in which you convincingly straddle the line between adulthood and adolescence. Here, you character struck me as an old soul from the get-go.

WB: I have gotten that quite a bit. I’m an old soul, man. I just know guys like Billy. They come from a very straight-laced moral background where things are the way they are and people act the way they act. You grow up around the age of 15 and accept responsibility around then. These boys don’t carry themselves like kids, they carry themselves like adults. The funny thing about that is it’s all bulls—t. Underneath that adult is a kid who wants to get drunk with his buddies just like everyone else. You see that in the scene where Jake comes to the bedroom and finds Billy drinking with his friends.

I remember when we shot the scene in the locker room. I had actually left the set while these guys shot some other scenes, so I hadn’t seen them for two weeks, which was a bummer because they were my best friends. I was like, “Man I’m missing out on all this stuff.” But I remember coming back and I was like, “As an actor, I’ve gotta bring my swagger. These guys have been in it, and I’ve gotta be ready to rock n roll.” As the character, it’s the same thing. I’m back for practice, I’ve got to take this seriously. It’s kind of like walking into the locker room. I’ve been in so many locker rooms in my life, and when I walk in, I’ve got to have my swagger on, because if I don’t, everyone is going to look at me. They’re going to see weakness instantly and they’re going to attack it.

Tyler, you filmed “Road to Perdition” here in Chicago when you were 13. What has it been like coming back to visit?

TH: Honestly, it’s been like a second homecoming for me. These guys saw it when we got here yesterday.

WB: He was jumping up and down in the car.

TH: It made me instantly happy to be back in Chicago. I have so many incredible memories from that shoot. Every time I’m back here, I always go to Joe’s on Grand and Rush to get a meal. It’s been an inspiring place for me as well. I would like to get to the point in my career where I can force things to come shoot in Chicago because it’s such a great place to make a movie. If there’s a way that I can put myself in a position to say, “We’re shooting this project in Chicago,” I would love to be able to do that. It’s such a great city and it treated us so well. It’s been nothing but good to me.