At first glance, “Disorder” may sound like any number of films you could find at your local multiplex on any given weekend—an ex-soldier is hired to protect the lovely wife and adorable child of a wealthy and somewhat shady businessman from those who would do them harm. The key difference between this new French film and the typical bone-crunching action extravaganza is that our hero, Vincent (Matthias Schoenaerts), has just returned from Afghanistan and suffers from a case of post-traumatic stress disorder that has left him tightly wound and paranoid about the potential dangers that he senses all around him. Once he becomes fixated on the notion of protecting trophy wife Jesse (Diane Kruger) and her child at all costs, there is the very real possibility that Vincent may be the greater threat to them. Even when the three of them are attacked and saved by Vincent’s quick thinking and military training, it does little to quell his paranoia—now that some of his fears have been confirmed, who is to say that all of them won’t come true?—or our fears of what might happen to Jesse and her child if it's all in his mind.

“Disorder” was written and directed by Alice Winocour, whose previous films have included her 2012 directorial debut “Augustine” and co-writing the screenplay for the Oscar-nominated drama “Mustang.” Both of those dramas featured characters with heavy psychological torments and “Disorder,” despite its splendidly executed action beats, is of a piece with them. Utilizing an ingenious soundscape, including an eerie electronic score from Gesaffelstein, and the fantastic high-wire performance from Schoenaerts, “Disorder” puts us so thoroughly into the mind of its increasingly unhinged central character that it works just as well as a psychological portrait as it does as an action thriller.

Recently in New York to promote “Disorder” (which opens this Friday), Winocour sat down to discuss the film, her artistic inspirations and the process of translating PTSD into cinematic terms.

“Disorder” is a film that contains any number of potential entry points for its development—including the notion of presenting the film pretty much entirely from the POV of a character suffering from PTSD, who may or not be imagining that which makes him increasingly paranoid. For you, what was the initial concept that eventually led to “Disorder”?

It was really the post-traumatic syndrome and meeting with soldiers who were coming back from Afghanistan. I had heard that some of them were coming back and that they were in the hospital suffering from PTSD. I decided to meet them and it was very helpful in writing this script to get the intimate details of their perception—of getting back to the normal world and their difficulties in coping with normality and reality.

Where did the idea come from to build upon that with a narrative that takes what looks like the framework of a standard-issue action thriller and explores it almost entirely in psychological terms?

The idea was to never leave the character’s point-of-view—to only understand what he could understand, to only feel what he could feel and hear what he could hear. The film almost had to be like a sensory experience, you know? Something very physical and carnal. I was driven by the idea that throughout the process—from the writing to the shooting to the editing and the mixing—that we should never ever leave his POV. 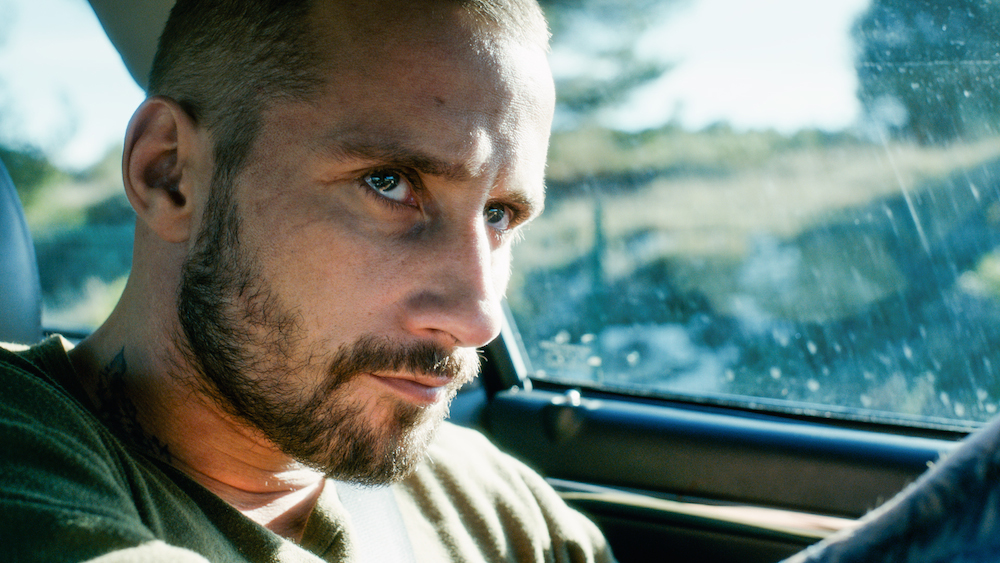 Did you have any particular cinematic inspirations that you looked at in preparation for this film? Vincent, for example, certainly recalls Travis Bickle, another tightly-wound loner suffering from war-related psychological trauma who tries to protect someone even though he may be the greater danger.

I was inspired by many films. I looked at a lot of them in preparation for the film and even during the writing. There were many different kinds of film as well. First, I was inspired by films like “The Conversation” and “Take Shelter” by Jeff Nichols—films with paranoid protagonists whose perceptions shape the narrative. I was also inspired by films that are more sensorial, like Antonioni’s “La Notte” or “Blow-Up”—that kind of very atmospherical storytelling.

The previous films that you have worked on—your directorial debut, “Augustine,” and “Mustang,” which you co-wrote the script for—have, like “Disorder,” dealt with characters dealing with heavy psychological torments. In those earlier cases, the characters in question were female. In exploring that concept from the perspective of a male character, did you find that you needed to change your artistic approach in any major way?

Yes, but to me, there are a lot of similarities to both of the films, even if they are in different genres. With “Augustine,” I was thinking a lot of horror movies and the Gothic atmosphere and dark romanticism, For this one, I was thinking about dark romanticism as well because it is a kind of dark love story. I can say that what is similar is that Vincent is a kind of male hysteric. What is really my fascination is what happens when there are no words to express your desire or your pain or your trauma and it is the body that is talking. You have this body that it screaming. I think I am fascinated by traumatized bodies.

The love story aspect is interesting here, in that it does not go along in the expected way. Instead of falling in love with her protector, Jesse is almost always a little bit in fear of Vincent, even after he has saved her life after an attack. By comparison, when Vincent’s friend from the army comes by to lend assistance, she is completely at ease with him from the first moment that they meet.

I liked the idea that the one who is supposed to protect you is scary and actually frightens you. I liked the things that you mentioned with the friend who arrives who is much more at ease with Jesse. It is also because he feels bad and doesn’t have confidence. I like the idea that the paranoia also affects the love and what he is thinking and feeling. In the last shot of the film, I like that she is coming from behind him because throughout the film, there is always danger coming from behind. At the end, it is her and love coming behind him in a very protective way. Of course, you can also look at that as a fantasy because you can have both interpretations. 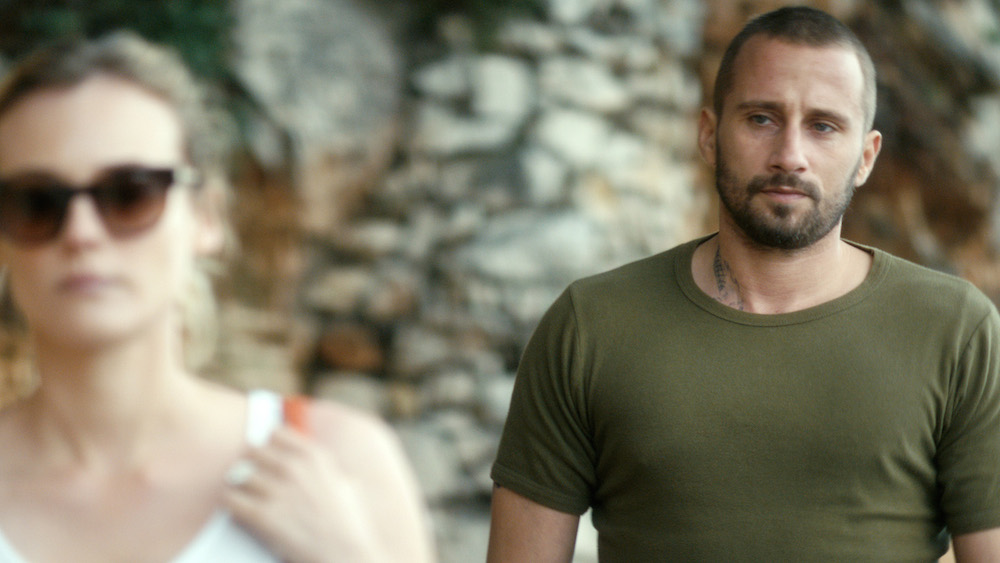 One of the most fascinating things about “Disorder” is the way that it deals with Vincent’s paranoia and the possibility that the dangers that he perceives everywhere may be entirely in his head. For most of the first half, we aren’t sure what to believe until the attack on the car that suggests his fears were indeed justified. Instead of getting some kind of relief from that, he becomes even more tightly wound than before—if some of his worst fears have come true, why couldn’t all of them?—and we are once again left to wonder for a long time if it is indeed all in his mind.

To me, that was a major ingredient of showing paranoia—to create doubt about everything. For example, the dog has disappeared—has it been killed or has it just disappeared? The best friend who turns up—is he really his best friend or is there something else with him? I wanted there to be a double meaning in everything.

Subsequently during all of that, you also get, oddly enough, a genuine sense of relief from Vincent. All through the film, he has been tortured psychologically by his fears of what could happen and once they finally do, he is able to tap into his more violent physical natures, all the doubt and hesitation disappears in an instant.

Exactly. Those soldiers live in a violent world and that is what they are trained to do. When they come back from combat, though, they find themselves in a world with different rules. They cannot connect with the normal world and cannot relate anymore. For example, Vincent is better dealing with dogs—he has a special relationship with the dog. Not being able to talk or behave—those are things that a lot of soldiers told me about.

How did you come about the casting of Matthias Schoenaerts and Diane Kruger for the key roles of Vincent and Jesse?

I really wrote the film for Matthias. I wanted someone who had the conditioning of a soldier. I liked the fact that he had this kind of broken soul. We worked a lot on his body and his tattoos. I had noticed that all these soldiers had their stories written on their bodies. We worked a lot on those—he had a prayer on his chest and dates on his arms. We didn’t do any rehearsals but we had all these discussions about soldiers and their bodies.

With Diane, I really wanted to have this character who was a trophy wife but who was also someone more emotional. What is great about Diane is that she has this very emotional side but at the same time has this glamorous look like a Hitchcock actress—she was like Tippi Hedren to me. She could follow her character’s path to emancipation because of the way that she delivered herself.